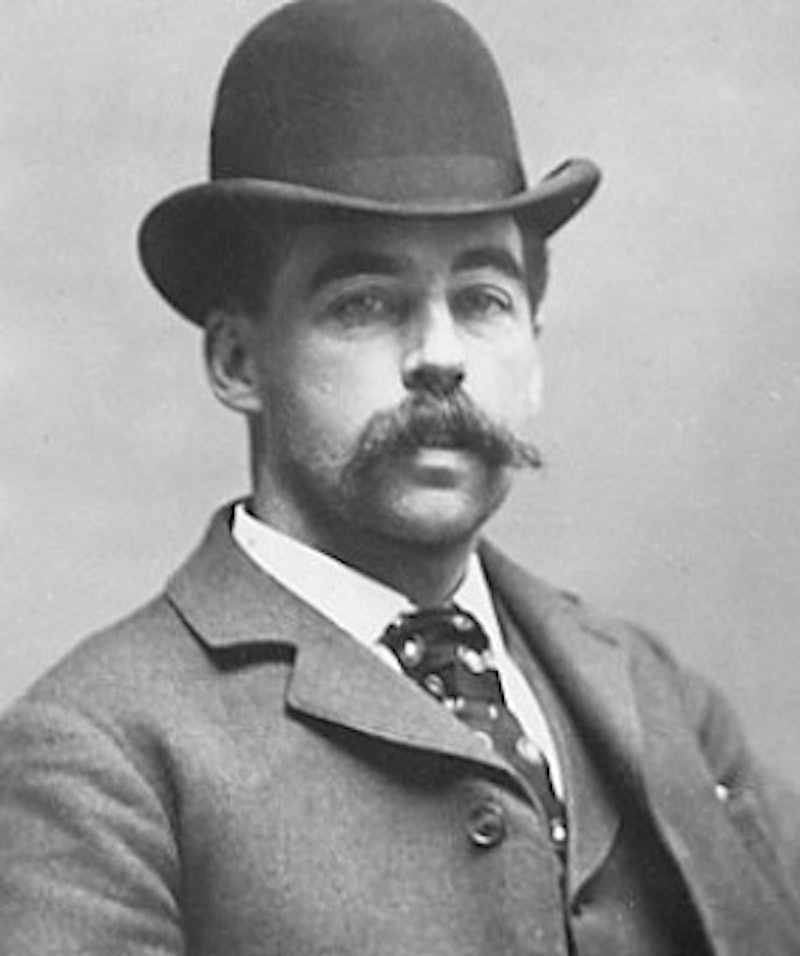 We've seen Leonardo DiCaprio take over Wall Street, sink at sea, infiltrate the Boston Irish mob, and, of course, survive a bear attack, but we've never seen him do anything as evil as his new role. That's right, the Oscar Award winner (is't that just so satisfying to say?) will take on the role of an infamous murderer in Martin Scorsese's upcoming film adaptation of Erik Larson's bestseller, but exactly who was the serial killer in The Devil in the White City ? His story is even darker than Calvin Candie's.

While you probably know the names of Ed Gein, Ted Bundy, and Aileen Wuornos, you may be less familiar with H.H. Holmes, but he was actually one of America's first serial killers.The focus of Erik Larson's 2003 nonfiction book and the upcoming blockbuster film starring DiCaprio, Webster Mudgett, who would later be known as Dr. H.H. Holmes, was a career criminal and an active serial killer in Chicago in the 1890s. Using the frenzy of the Chicago World Fair as his cover, Holmes lured guests to his hotel, which would later be deemed the "Murder Castle," where he would trap, torture, and kill his victims all in the confines of his very own building. Are you completely freaked out yet?

Long before setting up shop in Chicago, Holmes spent his wealthy childhood torturing and murdering small animals before he took his passion for mutilation to medical school, where he made a hobby out of experimenting on cadavers. It wasn't until he made his way out to Chicago in 1886 that the real nightmare begun, though. Finding the World Fair to be the perfect hunting ground, Holmes bought a pharmacy and its surrounding buildings and began building the scariest hotel in the world.

Using several different contractors to construct his "Murder Castle", Holmes designed and built his property to have windowless rooms, dead-end hallways, gas jets for each room (so he could poison his guests), and even incinerator chutes for bodies. It was in this evil lair that Holmes claimed his victims, mostly young women who came to the city looking for work or excitement from the World Fair. Once he got them inside the hotel, their fates were sealed. They would all eventually find their way to his torture chambers in the basement, one way or the other.

Holmes's murders weren't just an act of violence, but one of greed. After stripping them clean of any flesh, he would sell the skeletons of his victims to medical schools and laboratories for an exorbitant price. On top of his penchant torture, Holmes also had a knack for cooking up financial schemes that involved insurance scams. It was this nasty habit that would eventually lead Holmes to his capture.

America's first serial killer was eventually caught, convicted, and hanged for his crimes in 1896. Though the murders he committed are what got him the noose, it was a detective from Philadelphia that was investigating the death of Holmes' previous business partner (another one of his victims), Benjamin Pitezel, and their attempted insurance scam that got Holmes caught.

Holmes was officially charged with four counts of murder and six attempted murders, it remains unclear just how many victims died by his hands. There were nine confirmed victims at the time of Holmes's hanging, and at one point the killer confessed to 27 murders, but some estimate he murdered closer to 200 people during his reign of terror.

Holmes isn't just immortalized in his horrifying legend, Larson's book, or the upcoming film, either. Ryan Murphy's fifth season of American Horror Story: Hotel featured a Holmes-inspired character, Mr. March, who turned his own property into a personal torture chamber. If Leo's on-screen version of Holmes is even half as creepy as Evan Peter's, it's definitely going to give me nightmares.

If you haven't read Erik Larson's intriguing yet utterly disturbing account of Dr. H. H. Holmes's life and crimes, do it before you see the movie. Trust me, you're going to want to know everything you can about this notorious serial killer — just be prepared to sleep with the lights on.