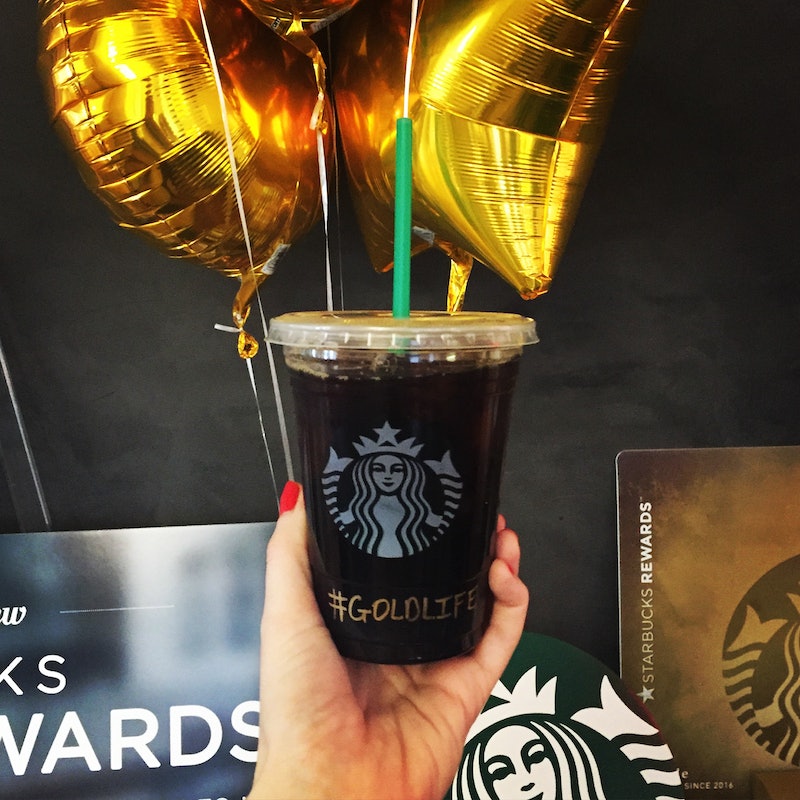 Starbucks fans, prepare to start seeing stars, because the new Starbucks Rewards program begins April 12, and the brand is celebrating in a pretty huge way. Between now and May 2, the coffee chain is giving automatic Gold status to Starbucks Rewards members who make a purchase at participating Starbucks stores. Not that you needed extra incentive to make a coffee run or two (or three) today, but in case achieving enough stars to finally boost you to Gold status has been the sole subject of your life existence for the last few weeks or so, today is your day. Go forth and shine, Gold status member. You deserve this. As for people who already enjoy Gold status? Make a purchase by May 2, and watch as your Gold status is magically extended for another year. That sounds almost as good as a steaming hot cup of coffee right about now, if you ask me.

Among the new changes to its Starbucks Rewards program, members will now receive stars per dollar spent, rather than per visit. Back in the olden days of My Starbucks Rewards (so like, last week), members received one star every time they entered a Starbucks store, and needed 30 stars for Gold status. Now, with the new system officially launched, members will earn two stars for every $1 they spend using a registered Starbucks card, and in the future will need 300 stars to achieve gold. In other words, that $4 Frappuccino you bought this morning is now worth eight stars, instead of the one star your visit would have earned you before.

Of course, the whole point of boasting Gold status in the first place is so you can cash in on Starbucks freebies. With the new system, you'll need 125 stars to redeem your rewards (any free food or drink item on the menu!), but there is a glorious number of ways to help you rack up those babies in no time. Here are six ways to get the most of the new Starbucks Rewards program, so you can sip on your fave free drink in no time.

1. Look out for Double Star Days

Under the new program, Starbucks Gold members can take advantage of Double Star Days, which are exactly what they sound like — days when four stars are awarded for every dollar spent, instead of two. The days will be announced via email.

Cool, because you have plenty of friends. Sounds easy, right?

3. Get stars at the grocery store by buying certain Starbucks items

Specially marked Starbucks items sold at stores, like whole bean and ground coffees, will still have star code values, so make sure to take advantage of them.

4. Make sure to get your free birthday drink!

Because you're a Gold star member, and you deserve it.

Did you know you can top off your coffee or tea for free?

No need to stand in line to use those points. Instead, redeem them via your Starbucks app when you use Mobile Order & Pay. Sounds like a plan to me!

The new Starbucks rewards program goes into effect April 12, and getting Gold has really never been easier, so make sure to hit up the coffee chain today to claim your status. There is free coffee to be had if you do, you guys. Free. Coffee.