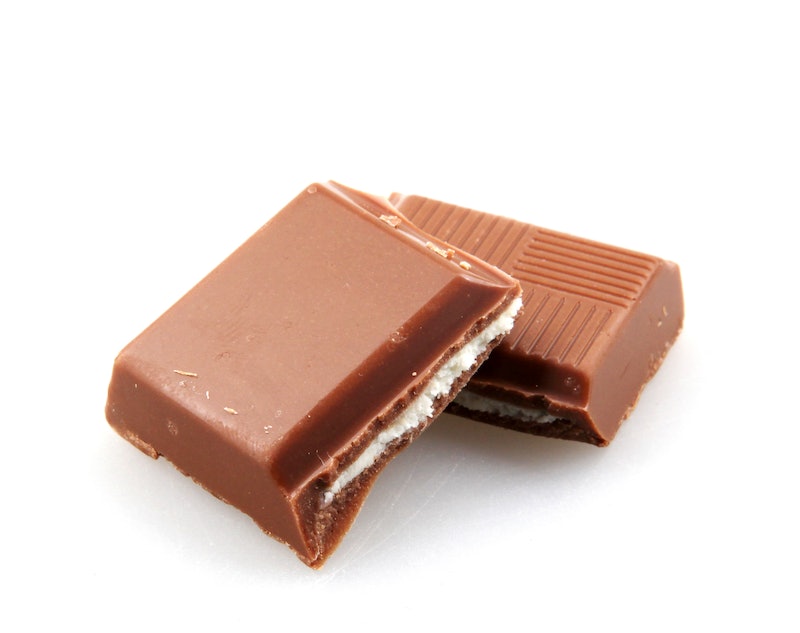 Today feels like Christmas, because science has explained to us why we should eat chocolate for breakfast. Yes, I know a lot of us were already doing this thanks to things like Cocoa Krispies and chocolate croissants — but we now officially have an excuse, and a good one at that: Chocolate can help boost your brain power. In a study conducted by Syracuse University, researchers found that the consumption of chocolate was noticeably and positively associated with a variety of tests, including the Global Composite, Visual-Spacial Memory and Organization, Working Memory, Scanning and Tracking, and the Similarities tests, in addition to the MMSE (mini-mental state examination). In a nutshell, the cognitive scores were substantially higher for people who consume chocolate at least once per week, compared to people who rarely or never consume chocolate.

Lifehack gets the credit for making the "chocolate is good for our brains; therefore, we should totally eat chocolate for breakfast" connection, and honestly, it makes a ton of sense — if we want to give brains a kickstart, morning (that is, breakfast time) is an A-plus time to do it. But even though I'm so grateful that I can now justify having dark chocolate after my eggs, the truth is that science has being telling us for years that chocolate is good for our brains. In one study by Harvard Medical School and Brigham and Women’s hospital, researchers found that for people between the ages of 67 and 77 who had impaired blood flow to their brains, drinking hot cocoa twice a day for 30 days led to a 30 percent increase in memory and thinking abilities, and an 8.3 percent increase in blood flow to the brain.

And hey, while we're on the subject, morning isn't the only time that might be worth giving our brains a cocoa-fueld boost. If you want to use chocolate to your advantage, here are three other useful times to indulge in this sweet treat.

1. Before Studying Or Taking A Test

Professor David Kennedy of Northumbria University gave 30 volunteers flavanol (a compound of chocolate) via hot cocoa. The volunteers were instructed to count backward in groups of three starting at a random number between 800 and 999. The people who had consumed the drink were able to count faster and more accurately. This was likely due to the flavanols increasing the blood flow to the brain. Have a piece of chocolate and you might find yourself working more efficiently with higher accuracy — just what you need to ace your next exam.

2. Before Trying To Sleep

Ironically, the same food that helps your work more efficiently also helps you sleep better, too. Science has found that the serotonin in dark chocolate can help relax your mind and body. Be careful though, because milk chocolate is a stimulant and could keep you up. Also, chocolate, like coffee and tea, has caffeine in it. Just, y'know, FYI.

3. When You're Feeling A Little Down

It turns out that dark chocolate helps encourage the production of endorphins, chemicals floating in your brain that make you happy. Additionally, the previously mentioned serotonin works as an anti-depressant. So when you're down in the dumps, pop a piece of dark chocolate for a little boost of happiness.

The benefits of chocolate don't end here. It's also been shown to help calm cravings, and it's even been found to aid in muscle growth and recovery, making it a good post-workout addition. It sounds like we all need to be eating more chocolate, so why not give a few healthy chocolate recipes a try? Your brain and body will thank you for it!