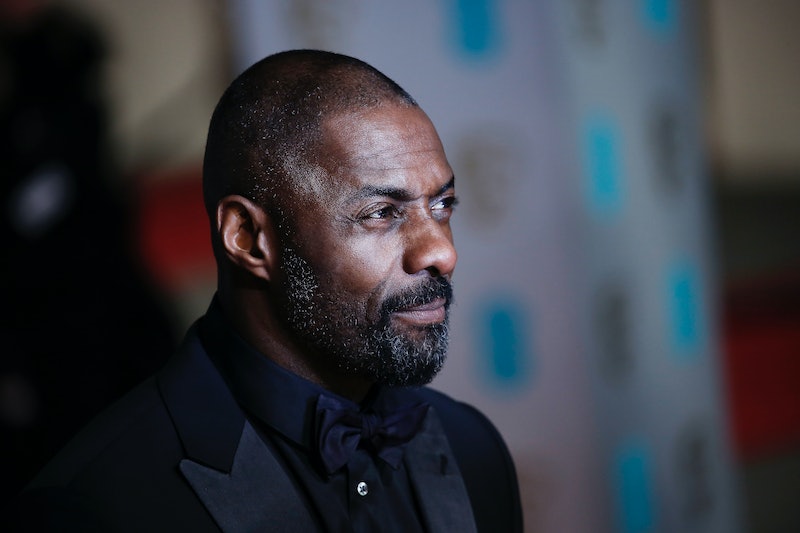 You might not recognize Idris Elba when you go see The Jungle Book, the new, pseudo-live action take on the classic Disney Animated film, but fans will definitely recognize his voice. As Shere Khan, Elba voices the tiger who goes after Mowgli, a man cub unwelcome in his jungle. Shere Khan, aka as the menacing tiger that gave you nightmares as a child, is no less frightening in this new film from director Jon Favreau, which mixes a live action performance by Neel Sethi as Mowgli with animated animals. Elba is just one of the A-list actors lending his voice to the film — the cast also includes Bill Murray as Baloo, Ben Kingsley as Bagheera and Scarlett Johnasson as Kaa. But, he's certainly one of the most, shall we say, effective of the bunch. In fact, it's safe to say that Idris Elba in The Jungle Book will make you feel very differently about Shere Khan.

Elba is not the first name that comes to mind when you think of Disney animation. The actor is best known for playing a drug dealer on The Wire and a violent cop on Luther, neither of which could ever be considered remotely kid-friendly. However, that's exactly what attracted Elba to the role in the first place. "The most exciting thing about being a part of this project was that my daughter and my son are going to get to see a classic with their dad's voice in it," Elba said in a Disney featurette.

The chance to work on something his kids, a 14-year-old daughter and a toddler son, could appreciate was something that greatly pushed Elba to take the role. "One of the main reasons I did it was because I want my kids to go, 'my dad, he did that,'" the actor said in an interview with Telegraph . But, aside from the adorable, super sweet, lovable reason Elba ended up voicing Shere Khan in The Jungle Book , there's something else about his performance that needs to be discussed.

Let's just be honest here: Elba will make you sexually attracted to an animated tiger, and it'll be very confusing. Everyone knows that Elba is sexy. Even he knows it. So, it's not that shocking that his voice would be sexy, even if it's coming out of a tiger in a movie. Don't believe me, or just don't want to admit the truth? Check out this clip and tell me I'm wrong.

I mean, that low grumble, the growling, forceful whisper and menacing tone — it's all undeniably attractive. It seems Elba's sexiness extends across formats, roles and senses. It's official: this actor could make anything sexy — tiger threatening to kill a little boy not excluded.