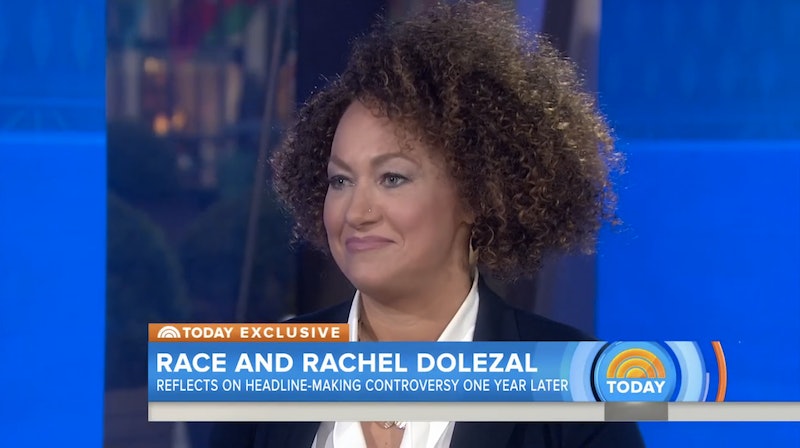 The woman who was made national headlines last year when she was outed as white after passing as black for over 20 years, Rachel Dolezal, is back and ready to stir up more controversy. The former NAACP Spokane chapter president who self-identifies as "transracial" announced Tuesday morning on TODAY that she is writing a book on racial identity. "Race is such a contentious issue because of the painful history of racism. Race didn't create racism, but racism created race," Dolezal told TODAY's Savannah Guthrie when asked about some of the themes in her new book.

Interesting probably isn't even a strong enough word to describe Dolezal's forthcoming book. Dolezal is articulate and well-versed in African-American issues from her time working in civil rights and teaching in the Africana Studies Program at Eastern Washington University. She has the tools to make a convincing argument on the politics of race. However, any argument can be convincing, but it doesn't make it right.

In essence, Dolezal's argument for a book, and for defending her self-perceived identity, must hinge on the idea that blackness, or any racial identity, can be boiled down and defined, because she can only identify as black if she can define what it means to be black and how she fits into that paradigm. That means breaking down an entire group of people into a few characteristics, which is pretty much the definition of racism.

The important rhetorical distinction here is identifying as a race versus identifying with a culture. If Dolezal had identified with the culture, that would be fine. A culture is a set of beliefs, values, rituals, and traditions that should be accessible to all people, so long as they are adequately respectful and knowledgeable of the culture's history and the privilege they may have within that culture. Identifying as a race is a completely different claim, because race is not supposed to define people at all. Biological race is supposed to be accidental to a person's character, so passing yourself off as another race is simply deceitful and unnecessary.

Perhaps Dolezal may be able to come up with some paradigm-shifting argument that completely changes the way people think about race, but considering the fact that African American studies have proliferated for nearly 50 years and the scholarly community is still debating these issues, it seems unlike that Dolezal will be able to reconcile these complex topics of racial and cultural identity in one book.