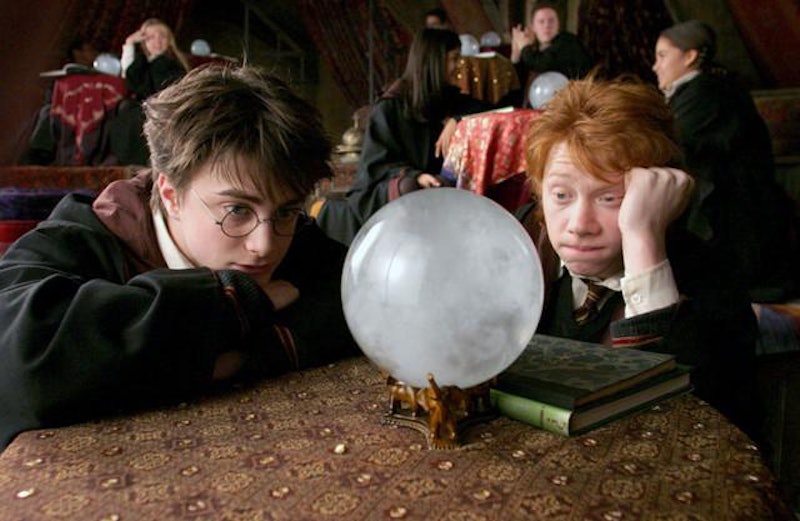 There are a few Harry Potter questions that all true fans dread. There's the classic "Which house would you be in?" (and then you have to explain that you're mostly a Hufflepuff, with a hint of Slytherin). There's "Which is your favorite book?" (and you have to explain that you love book four but there's also that one chapter in book six). And then there's "Who's your favorite character?" It's impossible to choose. But if you can manage to pick one Hogwarts student or alum who you love above all others, then you can find out what to read next based on your favorite Harry Potter character.

With all that running around and doing magic, we didn't get much of chance to find out what all the kids liked to read in the Harry Potter series. I mean, clearly Hermione liked to read her textbooks (and for fun, more textbooks), and the boys... liked to read Quidditch magazines, I guess? But if those kids didn't have to spend so much of their library time researching Nicholas Flamel or breathing underwater or Horcruxes, they might have actually read for pleasure.

Since we can only guess what the golden trio et al would have read in their downtime, I can't recommend your fave's favorite book. But I can recommend the books that best fit the witches and wizards we love:

1. Harry Potter: The Chronicles of Chrestomanci by Diana Wynne Jones

If you love Harry Potter (and you've already read all the Narnia books and Lev Grossman's The Magicians), then it's time to pick up Diana Wynne Jones. The first volume in the Chrestomanci series tells the stories of two young boys discovering their magic powers. One is an orphan, and one lives with his inattentive family (sound familiar?), and both are chosen ones of a sort. But the parallel universes they travel through are several worlds apart from the Wizarding World.

2. Ron Weasley: Is Everyone Hanging Out Without Me? by Mindy Kaling

OK, I know that Ron would probably grumble about being stuck with a book that has so much pink on the cover (because Ron is problematic, and that's why we love him). But this is a hysterically funny memoir about feeling left out, finding a best friend, and growing into a beautiful comedy genius. If that's not Ron Weasley, then I don't know what is. Reading these essays, you'll wish that Mindy Kaling could be your best friend. And, for all his flaws, Ron is one of the best friends any fictional person could ask for.

3. Hermione Granger: We Should All Be Feminists by Chimamanda Ngozi Adichie

Yes, this is very short book, but it's just so Hermione. Actually, a lot of books are so Hermione: Matilda by Roald Dahl, The Handmaid's Tale by Margaret Atwood, The Everyday Language of White Racism by Jane Hill. But this Chimamanda Ngozi Adichie book wins out, because Hermione is Hogwarts' foremost student activist. She's stubborn as hell, but she believes strongly in equality for all. She would not only read this, she would pass it out to every student as they entered the Great Hall.

If your favorite part of the Harry Potter book was the roster of terrifying (or, depending on your perspective, cute) monsters, then you should look into the world of Cryptozoology. It's the study of "hidden" animals, like the Loch Ness Monster or Bigfoot. Quite of few of them would fit right in with all those hippogriffs and blast-ended skrewts. And Hagrid would go nuts for the "adorable," beautifully illustrated monsters that fill this book from beginning to end.

If you like Luna's out-there attitude, you might like Karen Russell's strange collection of tales. These stories are... odd. They're about girls raised by wolves, and children who attend a camp for sleep disorders, and Minotaurs who head west in covered wagons. The stories take place in a world much like ours, but just a little more fantastic. If you, like Luna, enjoy a slightly skewed perspective on reality, then you'll love St. Lucy's Home for Girls Raised by Wolves.

6. Albus Dumbledore: The Hero with a Thousand Faces by Joseph Campbell

Who doesn't like Dumbledore? He's the classic mentor figure, he fights for what's right, and he's incredibly manipulative. If you love Dumbledore and his behind-the-scenes manipulation of pretty much every character in the books, you might enjoy Joseph Campbell's classic book, The Hero with a Thousand Faces. It's a look as the psychology behind classic myths, and the patterns that make up nearly every story. So you can always have a knowing smile about everything you read, just like Dumbledore.

Poor Lupin. There's more to him than his lycanthropy. But still, if you love intellectual Lupin and his dark secret, you'll probably love the beautiful, free verse story of Sharp Teeth. Yes, it's about werewolves. But it's not your average sexy supernatural thriller. It's by turns a harsh and sweet and lyrical reinterpretation of the werewolf myth in present day L.A.

8. Severus Snape: This Is How You Lose Her by Junot Diaz

This Is How You Lose Her is a collection of stories about one young man, the wonderful women who he dates, and how he loses them all by being a terrible, cheating ass. Look, I know Snape has his supporters, and that he was a complicated character... but let's be real, it's his own damn fault that he "lost" Lily. Try being less terrible next time, Snape. And if you like reading about complicated, terrible guys ruining their own relationships, read this book.

9. Draco Malfoy: The Picture of Dorian Gray by Oscar Wilde

I'm not saying that Draco Malfoy did sell his soul for eternal youth and eternally slicked back blonde hair, but he probably would. Or at least, he's definitely the kind of fashionable, charming, morally-challenged jerk who would get along with Dorian Gray. Malfoy might have his moments of redemption, but if you like stories of handsome, slimy men selling their souls, this is the book for you.

Ginny is a Gryffindor through and through. She's a jock with an attitude, she's nervy and doesn't apologize for dating around, and she would be a kick ass female knight if she could. Ginny would have loved Tamora Pierce's Alanna series. Alanna is a young girl determined to become a knight, even though it's forbidden to her gender. She succeeds through pure tenacity and courage, and any Ginny Weasley fan will love reading about her adventures with swords and sorcery.

11. Cho Chang: The Fault in Our Stars by John Green

If Cho Chang isn't your secret favorite character from Harry Potter, I can't help you. But if she is, then you must agree that she definitely rereads The Fault in Our Stars whenever she needs a good cry (and that girl can cry). And you, too, are welcome to read it if you enjoy crying for fun.