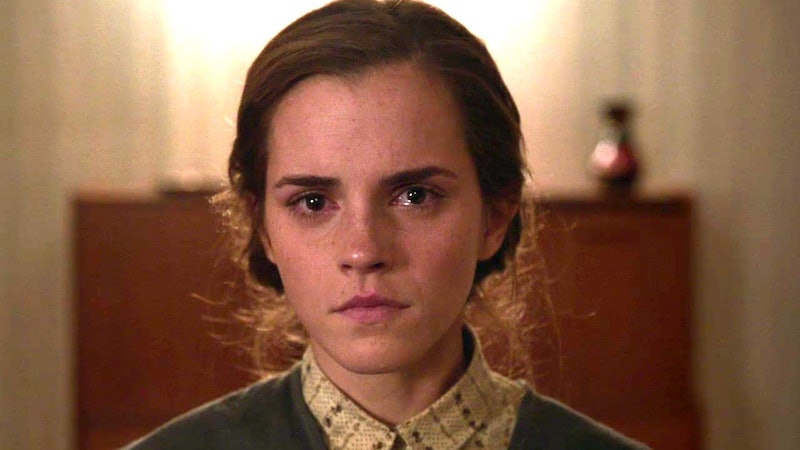 After her turns as a crass version of herself in 2013's This Is the End and as a possible victim of satanic sexual abuse in last year's Regression, Emma Watson continues her streak of challenging and disturbing roles with her latest film, Colonia. But unlike those other films, Colonia is based on a true story. The details of the film's subject matter aren't well known, but Watson's role in Colonia will help to give the sinister story some much-needed exposure.

In the movie, Watson portrays a woman in 1973 Chile, amid the chaos of Chilean dictator Augusto Pinochet's military coup d'état. Her German husband (Daniel Brühl) is taken away by Pinochet's secret police while protesting the dictator, and Watson's character attempts to track him down. She eventually traces him to the secluded settlement of Colonia Dignidad, a mysterious cult-like colony of mostly Germans, which she joins in order to gain access to her husband. This is where the craziness really begins, because once she's inside the walls of Colonia Dignidad, all bets are off. The story of Watson's character and her husband are fictionalized, but the cult of Colonia Dignidad was very real indeed, and the awful things that happened there decades ago are still being uncovered now.

The colony sounds truly terrifying, so it's no surprise that it's getting the big screen treatment. Nazis, torture rooms, and child abuse were all present (founder Paul Schäfer, along with 26 other cult members, was convicted of child abuse in 2004 by a Chilean court, according to The Guardian, and the Chilean National Commission for Truth and Reconciliation Report has confirmed that torture rooms existed in the colony, according to Al Jazeera). The colony was founded in 1961 by Schäfer (played by Michael Nyqvist in the film), a former Nazi colonel who fled Germany for Chile after being accused of sexually molesting young boys, according to Phil Davison of The Independent (Schäfer was never tried for these specific charges). The barb wire-surrounded fortress of Colonia Dignidad was allegedly made possible by Schäfer's alliance with Pinochet. The two were said to have a mutually beneficial relationship, according to The Independent, with Pinochet allegedly turning a blind eye to abuse and other crimes at the compound in exchange for Schäfer letting the colony acting as a torture site for Pinochet's political prisoners.

As the Chilean National Commission for Truth and Reconciliation Report confirmed and Al Jazeera reports, Pinochet's DINA secret police (his national intelligence agency officers) routinely brought prisoners to Schäfer, where they were allegedly viciously tortured and eventually killed, allegedly by Schäfer himself much of the time. Schäfer was also said to be aided in his torture techniques by notorious Nazis in hiding, like portable gas chamber inventor Walter Rauff, and Aushwitz's so-called "Angel of Death," Josef Mengele, according to Al Jazeera. The bodies of many of the prisoners have been discovered on the colony grounds. Also found on the property in recent years were massive weapons caches, including a tank, in what is said to be the largest privately-held collection of arms ever discovered in the country, according to the New York Times.

Then there was the charges of sexual abuse brought against Schäfer by the Chilean government, for which he was later found guilty. Already an accused pedophile at the time of the colony's formation, Schäfer has been confirmed by the Chilean National Commission for Truth and Reconciliation Report to have used his newfound power to sexually abuse countless victims, mostly young boys. Witnesses claimed to The Independent's Phil Davison that Schäfer made everyone in the colony call him "Eternal Uncle," and that Schäfer was always surrounded by a cadre of young boys whom he would keep in line with tranquilizers and electric shocks, and whose parents were kept separate from them and drugged.

Thankfully, Schäfer's reign of terror came to an end in 1997, when over 20 children of the colony accused him of sexual assault. He fled the country, and was found in Argentina eight years later. The Chilean government, no longer under Pinochet's regime, took over the compound in 2005, and 18 other members of the colony were indicted in relation to the torture that took place there. Schäfer himself was sentenced to 20 years in prison for sexual abuse in 2006 at the age of 84, according to the BBC. He died in 2010, while Pinochet died four years earlier.

Colonia Dignidad was a horrific place, and it's important that more people know about what went on there so nothing like it ever happens again. Hopefully Emma Watson's Colonia will do a good job of spreading the word.