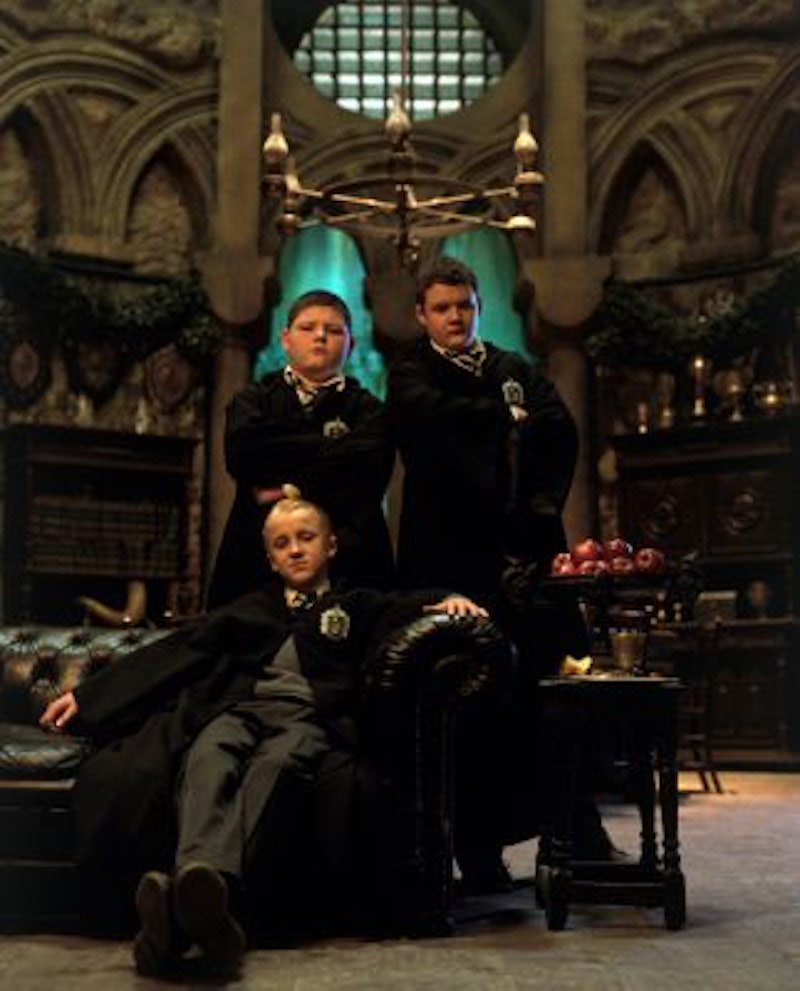 I’m going to come right out and say it: out of all the Harry Potter houses, the only house that needs constant defending is house Slytherin. Sure, a close second is Hufflepuff (even if they are particularly good finders), but if you’re in Gryffindor or Ravenclaw, you’re basically set. I refuse to accept that.

Ever since I was a little girl reading the books for the first time, I’ve completely rejected the notion that there were three nice houses and one completely evil house. What kind of school system is that? As I grew, I began to realize that the entirety of the Harry Potter series was told from Harry’s point of view, and his opinion of Slytherins was less-than-favorable due to Hagrid’s bias and an uncomfortable encounter with Draco Malfoy in Madame Malkins. Harry wasn’t aware that a bunch of dark wizards come from other houses, too. He wasn't aware that the house has definitely relaxed its “Pure Blood” requirement (Half Blood Prince, remember?) and that they were really just a bunch of awesomely ambitious, totally clever, incredibly resourceful people. Sure, there was Crabbe and Goyle, but didn’t the Gryffindors have Cormac MacLaggen? Merlin was a Slytherin, and he was also the most famous wizard ever. So take that, Hagrid.

I’ve been a happily identified Slytherin since my early teens, and I’ve always loved tailoring my tastes to that of my house. Of course, this absolutely means that I must combine two of my favorite things: my house and YA novels. So if you’re delightfully ambitious, complex, and clever, take a gander at these YA novels for Slytherins:

1. A Great and Terrible Beauty by Libba Bray

Gemma Doyle had an unconventional upbringing in India. After her mother dies and she experiences a terrible vision, Gemma returns to England and enrolls in finishing school. After blackmailing her way into the popular clique, she discovers a way to bring her friends into her visions — but that kind of power comes with a terrible price.

2. Shadow and Bone by Leigh Bardugo

The once great nation of Ravka has recently been torn in two by the Shadow Fold, a swath of darkness crawling with flesh eating monsters. Alina Starkov is a refugee and an orphan, and when her regiment is attacked in the middle of the Fold, she reveals a dormant power that saves the life of her best friend, Mal. Since her power holds the key to saving the nation, she's whisked away to the royal court in order to be trained under The Darkling as a member of the Grisha, a mysterious magical order. This basically means that she ends up in a magical boarding school full of mean girls and hot boys — and isn't that almost every Slytherin's dream?

After serving out a year-long sentence in the salt mines, 18-year-old assassin Celaena is offered her freedom by the Crown Prince Dorian. In exchange for her freedom, she must agree to be the Prince's champion in an ongoing competition to find the king's new royal assassin. The competition appears to be going as smoothly as can be expected... until one of the contestants turns up dead. And then another. Now Celaena needs to figure out who's murdering her fellow contestants and discover the truth behind the king's power. Throne of Glass is the first book in a series of six books, two of which have yet to be released.

4. The Knife of Never Letting Go by Patrick Ness

In Prentisstown, a town comprised exclusively of men, everyone can hear everyone else's thoughts. Enter Todd, a boy who will officially become a man one month from now, on his 18th birthday. However, he shakes up the order of his universe when he discovers a land of complete silence... with no thoughts at all. Todd is an ambitious and resourceful character, and I have no doubt he'd be in the House of Slytherin.

Set in a dystopian version of Chicago, Beatrice "Tris" Prior lives in a world where the world is divided into five factions based on a particular virtue: Candor (the honest), Abnegation (the selfless), Dauntless (the brave), Amity (the peaceful), and Erudite (the intelligent). Each year, every 16 year old teenager in the society must be placed in one of these five factions. But what happens when Tris realizes she doesn't belong in any of the five factions? What happens when she's labeled as "divergent"? You'll have to read to find out.

6. The Hunger Games by Suzanne Collins

Set in a dystopian version of the United States, The Hunger Games centers around the titular hunger games, a competition where 24 teen are placed in an arena and are forced to battle each other until only one remains. I'd bet money that Katniss Everdeen is a Slytherin, considering she's immediately willing to play into the love story with Peeta in order to save her own life.

7. The Young Elites by Marie Lu

In The Young Elites, Marie Lu takes readers into the mind of the series' villain, Adelina. This fierce, white-haired girl survived the blood fever, but she emerged from the illness with mysterious powers. She soon discovers that she's not the only one with these powers, and when she joins a secret society of superhuman teenagers, she's forced to confront the darkness within her. Adelina is a true Slytherin, and you can indulge in her story in The Young Elites and its sequel, The Rose Society.

Twelve-year-old Artemis Fowl is a millionaire, a genius, and above all things, a criminal mastermind, who struggles to keep his family together as they mourn the disappearance of his father, Artemis Fowl Sr. When Artemis accidentally kidnaps a faerie, his entire life gets thrown into disarray and he finds himself in the midst of a supernatural siege.

When Rudy's family moves to a remote island in a last ditch attempt to help his terribly sick brother, he thinks his life might be over. Then he meets Teeth, a mysterious and beautiful boy that makes him question everything he knows. But Teeth may be hiding a dangerous and violent secret.

10. Every Heart a Doorway by Seanan McGuire

Magical worlds exist, and children are drawn to these worlds. But what happens when these children leave the land? What happens when they are tossed out? Or escape? It's not easy for those people who disappear and come back, and most of them end up in Eleanor West's Home for Wayward Children. After being sent back from the halls of The Lord of the Dead, Nancy ends up in this strange boarding school. When tragedy strikes, she's forced to team up with her schoolmates to figure out what is going on — no matter the cost.

11. An Abundance of Katherines by John Green

For the Slytherin who is sick to death of magic, An Abundance of Katherines centers on washed-up child prodigy Colin Singleton, a man who seems to only date girls named Katherine. In fact, he's dated 19 Katherines, and every single one of them has dumped him. Now he's setting off on a road trip with $10,000 in his pocket, a bloodthirsty feral hog on his trail, and his best friend by his side. On this trip, Colin hopes to crack The Theorem of Underlying Katherine Predictability, so that he can predict the future of every relationship and finally win the girl. This layered and complex road trip novel is catnip for the average Slytherin.

12. The Magicians by Lev Grossman

Imagine a Harry Potter world where everyone is both a Ravenclaw and a Slytherin at the same time. That's basically The Magicians. Quentin Coldwater has always longed for two things: to live in the magical realm of Fillory, the setting of a series of children's books, and to be special. Imagine his surprise when he is accepted to Brakebills, a magical university that trains magicians. Quentin excels at his studies, but when a mysterious Beast attacks one of his classes, he realizes that Fillory is real — and he might be able to save it.