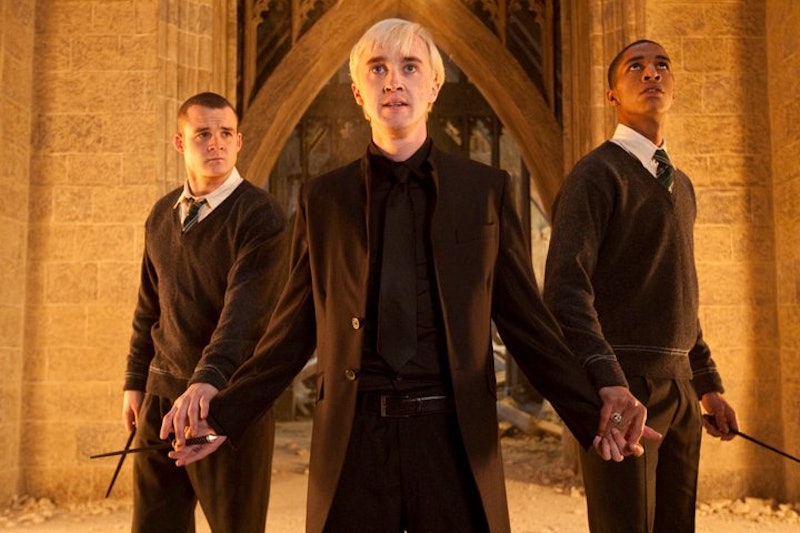 By the time the eighth and final film rolled around, readers of the Harry Potter book series had learned to let go of those little gripes about changes that come with any book-to-screen adaptation. However, when a series regular character is not only absent, but replaced in a notable scene , it raises a lot of questions. One of the most memorable scenes from Harry Potter and the Deathly Hallows occurs during the Battle of Hogwarts in the room of requirement, when Malfoy, Crabbe, and Goyle fight Harry, Ron, and Hermione while they try to find one of Voldemort's last remaining horcruxes. However in the film, Crabbe is replaced by Blaise Zabini, another character from the series.

In the book, there is an impressive show of dark magic by the Slytherin trio and Crabbe produces the powerful Fiendfyre that leads to his assumed death. So where was Crabbe when we saw this all played out on the big screen? And why was Zabini brought in to take his place?

It turns out the actor who played Crabbe, Jamie Waylett, got into some trouble offscreen and it cost him Crabbe's final scenes in the Harry Potter franchise. In 2009, Waylett was arrested for growing marijuana in his mother's London home and plead guilty to possession of cannabis and possession of a knife. He was ordered to pay a fine and sentenced to six weeks in a young offender's institution, as reported by The Guardian.

Then in 2011, the same year that Harry Potter and the Deathly Hallows: Part Two was released with his character replaced, Waylett was arrested again. He took part in London's 2011 riots, and was reported to have been seen holding a petrol bomb. Though he was not charged for attempting to use the bottle of gasoline with an unlit rag he was seen carrying in photos and video footage, he admitted to, and was pictured, drinking stolen champagne from a supermarket looted during the riots. Waylett was charged with two years in prison for violent disorder, including a concurrent sentence for handling stolen goods.

Even though Waylett's first arrest removed him from the Harry Potter cast, a third Slytherin was still needed for the final film if the scene was to unfold in the same epic manner. Instead of going the route where the movie makers try to pull one over on the viewers and cast someone who kind of looks like the original actor, they just replaced Crabbe with a completely different character.

Actor Louis Cordice won the role of Zabini, who was dropped in the space where Crabbe would be, leaving viewers who had read the books confused. Unless they saw news reports of Waylett's arrest, non-readers were likely none the wiser for the switch.

So no, you weren't going crazy when you swore you remembered Crabbe being the third Slytherin to battle Harry, Ron, and Hermione in the room of requirement. Like Crabbe, Waylett got into some trouble, and the movie's producers had to do the old subtle switch, despite fans expecting to see Crabbe one last time in the final Harry Potter film.