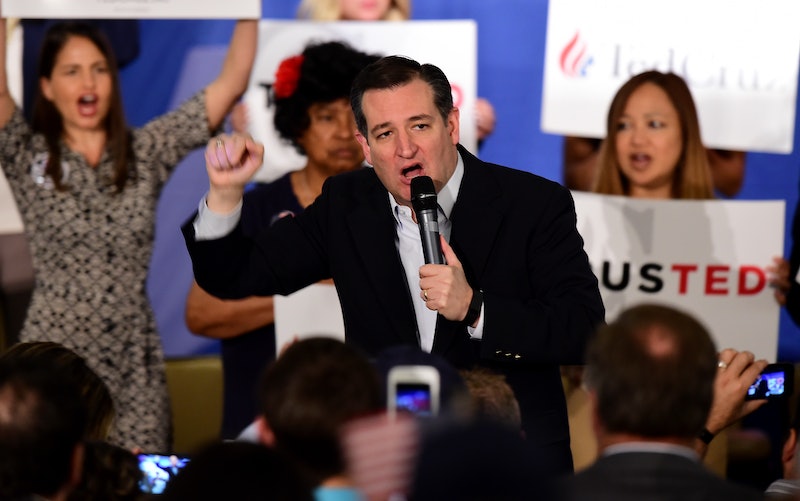 I consider myself a scholar of Cruz's particular breed of terrible. But this? This is the thing that broke me. Of course, I harbored no delusions of Cruz being a champion of bodily autonomy (see: just about anything he's ever said to/about women), but to be a part of a case that's so absurdly puritanical, backward, and ridiculous? To commit time and legal resources to policing such an intimate part of a person's life? It's the worst thing I've ever read. This is why that miserable sack of Texan flesh is my nemesis.

Corn wrote that Cruz was part of a legal team working for current Texas Gov. Greg Abbott back in 2007, when Abbott was the state's attorney general. They filed a super un-brief (76 pages!) brief seeking to uphold a law that banned selling or promoting "obscene devices" like sex toys. According to Corn, this law got one Texas mother arrested by undercover cops for hosting a Passion Party. (You know, those fun sex toy Tupperware parties? Yeah.) Why? Apparently, it was all about protecting "public morals."

Worst of all, Corn described parts of the brief penned by Cruz's team, and it reads more like a terrible dystopian erotica script than a legal document:

The brief insisted that Texas in order to protect "public morals" had "police-power interests" in "discouraging prurient interests in sexual gratification, combating the commercial sale of sex, and protecting minors." There was a "government" interest, it maintained, in "discouraging ... autonomous sex."

Corn added that this brief also compared using sex toys to "hiring a willing prostitute" and offered up a truly agonizing slam dunk that "there is no substantive-due-process right to stimulate one's genitals for non-medical purposes unrelated to procreation or outside of an interpersonal relationship." Sexy. Ultimately, the courts rejected the case made by Cruz's team for being ridiculous and unconstitutional. But for some reason, they declined to take it up with the Supreme Court.

Just to up the cringe factor: Craig Mazin, Cruz' college roommate who regularly roasts him online, said on Twitter Wednesday morning that Cruz's supposed stance on "[stimulating] one's genitals" was news to him:

Leaving y'all with that very disturbing image, I apologize for talking about Cruz and sex toys in the same breath. I hope you can find it in your hearts to forgive me.