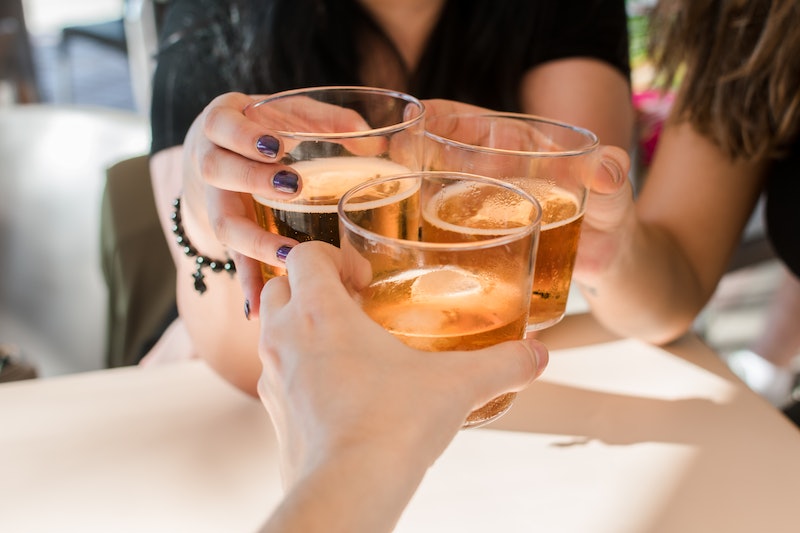 Everyone has That Friend — the one who mixes drinks so strong that one sip is enough to turn your breath practically flammable. (That's how science works, right?) Knowing how much alcohol is in your drink is pretty much rule number one when it comes to drinking safely, but according to a recent study published in the journal Addiction , a standard drink around the world varies wildly depending on where you order it. It highlights exactly why, when considering our own drinking habits, measuring simply by number of drinks may not be enough — we need to consider exactly what's going in those drinks, too. Our health depends on it.

Bustle's Lara Rutherford-Morrison walks us through a pretty thorough discussion of the study here, but to recap, here's the general gist of it: A "standard drink" definitely isn't standard globally. The United Kingdom, for instance, was surprisingly conservative in the strength of an average drink; government guidelines state that a single drink contains eight grams of "pure" ethanol, which researchers write is equivalent to 8.5 ounces (oz) of beer, 2.6 oz of wine, or 0.85 oz of hard liquor. In contrast, the standard drink in the United States has 14 grams of ethanol, which is nearly twice as strong as a UK drink — and the U.S. definition wasn't even the most liberal. According to the report, first place goes to Austria, where official guidelines state that a single drink contains 20 grams of alcohol. (For reference, the World Health Organization defines a single drink as containing 10 grams.)

It's probably no surprise to hear that the recommendations for low-risk consumption differ as well. For instance, the Australian government recommends no more than two drinks a day for both men and women. On the other hand, Chile suggests that men can have up to 56 grams of alcohol a day, roughly equivalent to five glasses of wine, before it poses health risks.

Before you start making plans to hit up Austria or Chile for your next vacation, it's important to realize that the study has implications beyond partying: It brings attention to the need to measure alcohol content rather than the number of drinks. For instance, UK and U.S. alcohol recommendations seem similar at first glance. The UK suggests consuming no more than 14 units of alcohol a week, or 112 grams, and the United States recommends that men have no more than 14 drinks a week as well. However, thanks to the higher alcohol content in each standard U.S. drink, U.S. men are thought to be able to safely consume up to 196 grams a week (although it's probably not the best idea to test the limit on a regular basis).

Needless to say, this stresses the importance of keeping track of how strong your drinks are. Excessive drinking is linked to all sorts of health problems in the long- and short-term, and alcoholism can ruin lives. (Again, the study is published in Addiction.) Of course, alcohol consumption varies by culture, and a few glasses of wine over the course of a day isn't the same as doing five shots in a row. However, it's important to keep in mind that alcohol guidelines are there for a reason: to help prevent people drink (and party) safely. With that in mind, let's check out the countries with the strongest standardized drinks.

Finally, let's have a moment of silence for Iceland and the U.K., where a standard drink contains eight grams, equivalent to one very small glass of wine. You can check out the U.S. alcohol guidelines here.