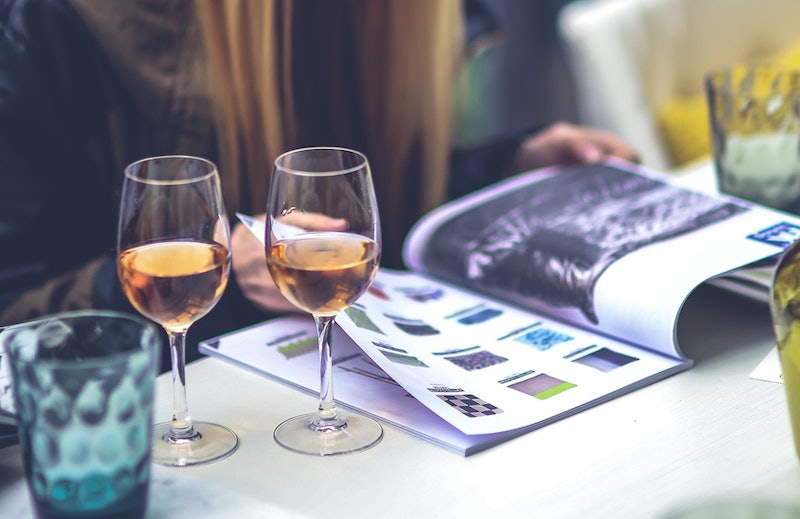 Many people like a nice glass of wine, a delicious cocktail, or a craft beer, but alcohol can cause problems for us humans when we drink too much of it. You may not realize it, but you could be drinking too much, and it's best to nip the warning signs in the bud before you develop a real problem. According to the Rethinking Drinking website, the definition of drinking too much alcohol, "...could mean drinking too much at one time, drinking too often, or both." The Centers for Disease Control and Prevention informed readers that, "According to the Dietary Guidelines for Americans , moderate alcohol consumption is defined as having up to one drink per day for women and up to two drinks per day for men. This definition is referring to the amount consumed on any single day and is not intended as an average over several days."

People drink for many reasons: To de-stress, to celebrate, to commiserate, or to let go of their inhibitions, and feel more confident. When you've had a particularly stressful week or on the other hand, a sociable week, it can be difficult to keep track of how many drinks you're consuming. When you throw the holiday season into the mix, counting drinks can often fly out of the window. Here are a few warning signs to look out for which might suggest that you are drinking too much.

1. You Look Forward To Coming Home To A Drink

We all have bad days and sometimes you might find yourself daydreaming at your desk about the delicious bottle of rosé chilling in your fridge at home. The Director of the Addiction Science Research and Education Center at the University of Texas, Carl Erickson Ph.D. told SHAPE, "Drinking to feel better after a fight with your guy or a rough day at work are forms of self-medication, and that means you're abusing alcohol in a way it's not meant to be used," so maybe try to think of some alternative non-alcoholic ways to lift your mood instead.

2. You Started To Drink Alone

In his article for The Huffington Post, life coach and mental health advocate Danny Baker reported that if you've started drinking on your own, "Alarm bells should be going off once this starts happening." It might be a good idea to question your motives behind drinking and ask yourself honestly whether it is turning into an unhealthy habit.

3. Your Tolerance To Alcohol Has Greatly Improved

Have you had to start drinking more to feel the same buzz which you used to get off less booze? The Daily Mail reported, "Being able to have a couple of drinks and not feel tipsy is often a sign that someone is drinking very regularly," Sarah Jarvis, a doctor and medical adviser to the Drink-Aware charity, said. So watch out for this subtle sign.

4. Your Friends & Family Joke About How Much You Drink

You might not have noticed the increase in your alcohol intake, but your friends and family may have. You might have become the butt of drinking related jokes which are actually masquerading as concerned comments. During her article for Prevention, writer Holly C. Corbett informed readers, "If your family, friends, or co-workers have hinted (or flat-out vocalized) that they’re worried about you, it’s time to cut back." She also explains a way to combat this issue, "Tell your partner or friend what your drinking limit is going to be before you go to an event where alcohol is free flowing. This makes it easier to say no to the next drink, because you’re being held accountable by someone else."

5. You Drink Before Most Social Events

There are times when we could all do with a little Dutch courage, but using alcohol as your comfort blanket before most of your social events may be a bad move. The Anxiety and Depression Association of America reported on the link between social anxiety and alcohol, "About 20 percent of people with social anxiety disorder also suffer from alcohol abuse or dependence, and a recent study found that the two disorders have a stronger connection among women." So hop off the slippery slope before it gets too hard to get off.

6. You Drink Most Days

The chief executive of the British Liver Trust, Andrew Langford, discussed alcohol intake with Mike Shallcross in an article for Men's Health. Langford told Shallcross, "If you are going to drink, you must take two to three consecutive days off every week to give your liver a chance to rejuvenate — regardless of how much you're drinking," so try to cut back on the amount of days you drink per week.

Do most of your social events include alcohol? Do you watch sports in a sports bar, eat out regularly, always opt for an alcoholic beverage, or BYOB to parties and get togethers? England's National Health Service (NHS) explained the risks, "Many people who see themselves as 'social drinkers' are at risk of developing long-term health conditions because of the amount they regularly drink. Most drinkers are unaware that regularly drinking more than the limits advised by the NHS can lead to a wide range of long-term health problems, including cancers, strokes and heart attacks." It might be time to take some time out from drinking and enjoy some tasty non-alcoholic beverages at your next social event.

Enjoy alcohol and stay healthy by recognizing the signs that you may be drinking too much and take action.

More like this
This Psychological Effect Might Be Keeping You From Hitting Your Goals
By Lexi Inks
10 Pumpkin Recipes That Are Way More Creative Than Pie & Lattes
By Rebecca Deczynski and Alexis Morillo
On TikTok, Tinned Fish Date Night Is The Latest Viral Food Obsession
By Emma Carey
Here's How Cardio & HIIT Affect Your Body Differently
By Carolyn Steber
Get Even More From Bustle — Sign Up For The Newsletter