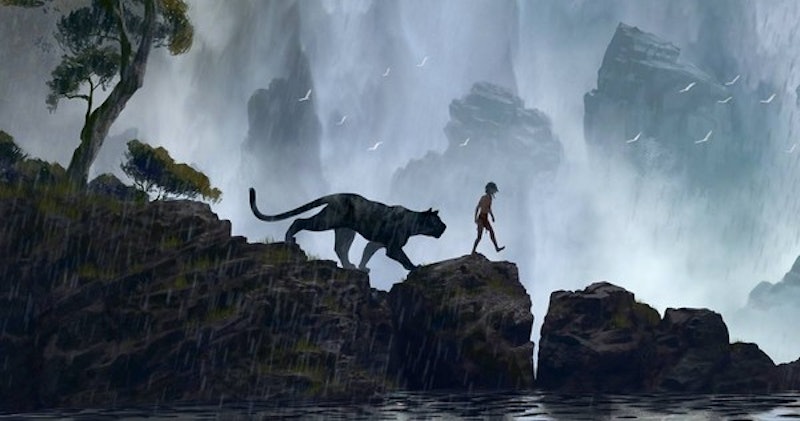 Like many other movie fans, I can't help but sing along to the soundtracks from Disney's animated films. While "Kiss The Girl" from The Little Mermaid took on a whole new meaning when I came out as queer, my favorite Disney track will always be "Be A Man" from Mulan, because it's just so darned campy — what does it actually mean to be as "mysterious as the dark side of the moon?" Does anyone actually know? It's pretty silly, but it's also a classic — and now, with a new Disney movie out in theaters, folks might wonder how The J ungle Book track listing stacks up against that of other Disney musicals.

The team behind the film has made it clear that this new film isn't an actual musical, though the movie does make a few, small musical homages to the original animated flick, which show up on the soundtrack. On the track listing, this includes a rendition of "Bare Necessities" sung by Bill Murray, which might be the most soul-satisfying thing I've ever encountered. Yet while we don't know the specifics of the rest of the soundtrack yet, I'd wager that The Jungle Book soundtrack listing is different from what you'd usually expect from a Disney film.

For me the most recognizable change to the soundtrack is that Alan Menken is nowhere to be found. If you can hum the theme song to Aladdin or The Little Mermaid, you're familiar with Menken's work — the man is responsible for most of the music coming out of Disney's most classic animated films. He is also doing the score for the upcoming live-action Beauty and the Beast, but for The Jungle Book, Favreau called upon composer John Debney. Debney is the musical mastermind behind Elf's super sweet and sparkly soundtrack and Iron Man 2's pulsing score, so it sounds like another magical collaboration is in the works, even without Menken on-board.

Another noticeable contrast between the classic Disney soundtracks and The Jungle Book is the role of vocal performances. While Disney animated movies are known for bringing in voice actors known for their singing chops like Jodi Benton, The Jungle Book relies on its big names to raise the roof — like Murray. Scarlett Johansson also speak-sings as Kaa, hissing out a sultry, spooky version of the original film's "Trust In Me." While the actor already did an album of Tom Waits covers, this tune feels even closer to that musician's work.

With all of this in mind, it seems like the most hardcore of Disney devotees will be singing along to the tracks from The Jungle Book. See what all of the noise is about when the film and soundtrack drop on Apr. 15.

More like this
You’ve Been Singing The Wrong Lyrics To “All I Want For Christmas Is You”
By Sam Ramsden
'The Holiday' Director Just Addressed *Those* Sequel Rumours
By Sam Ramsden
These ‘Love Actually’ Plotlines Are “Out Of Date,” According To Director Richard Curtis
By Grace Wehniainen
This Iconic ‘Love Actually’ Scene Drove Alan Rickman “Insane”
By Grace Wehniainen
Get Even More From Bustle — Sign Up For The Newsletter