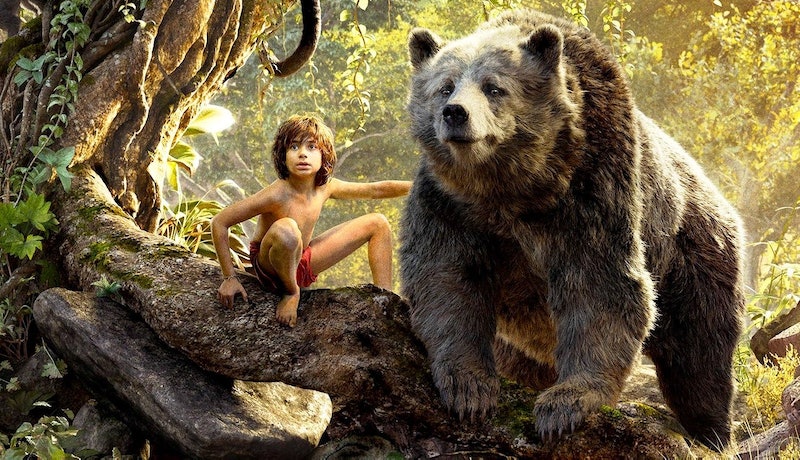 On Apr. 15, Disney's live-action reboot of the 1967 animated classic The Jungle Book roars into theaters. And while this adaptation of Rudyard Kipling's short stories trades animation for realism, the 2016 Jungle Book doesn't abandon music as a storytelling device. The Jungle Book will have an complementary soundtrack album that will likely feature a few melodies that are familiar to fans of the classic Disney songbook. The Jungle Book soundtrack will be released on Apr. 15, the same day of the film's theatrical debut.

Amazon has The Jungle Book soundtrack available for pre-order in CD format for $12.62. There is no digital download version listed yet and iTunes does not have the album listed at all. The Amazon pre-order page does not include a track listing, but the cover art for the soundtrack features the subtitle "Original Music Composed By John Debney." Debney previously worked with The Jungle Book director John Favreau on the scores of Zathura, Elf ,and Iron Man 2. The composer's other notable work includes original music for Sin City, The Emperor's New Groove, and The Passion Of The Christ, for which he earned an Oscar nomination.

Without a track listing, it's anyone's guess if any 2016 versions of the original Jungle Book songs are a part of this collection. The full trailer for the film hinted that at least two of those tunes would be making a comeback. Scarlett Johansson's Kaa dips into a seductive solo when she commands the man-cub Mowgli to "Trust In Me."

And after a few minutes of jaw-dropping and life-like action scenes featuring the young hero and his beastly friends and enemies, the trailer ends with a cute callback: Mowgli and Baloo floating down the river while Baloo whistles "The Bare Necessities." Favreau has confirmed that the live-action Jungle Book does include singing, despite being tonally different from its predecessor. The director answered a query about music's role in the film in a Twitter Q&A last September.

And that music influenced the director as much as it did some of his audience. “I love New Orleans music and I love swing music," Favreau recently told Collider. "When you realize that your whole baseline musical set of references comes from watching Bugs Bunny and Disney, you realize what you were being exposed to when you were young." The challenge then was to respect the balance between acknowledging shared nostalgia and being truthful to the new film the director was looking to make. "So, I didn’t want it to be distracting, but I definitely wanted to introduce some of the influences that I was introduced to, to the next generation," Favreau said.

I'm predicting that, at the very least, a 2016 version of "The Bare Necessities" will make it onto The Jungle Book soundtrack album. In addition to its prominence in the trailer, the bouncy tune also got a shout-out during a recent episode of Jimmy Kimmel Live. Neel Sethi and Bill Murray play Mowgli and Baloo respectively, and they treated Kimmel's audience to an impromptu performance of their duet. This performance can tide you over until the new Jungle Book movie and soundtrack are simultaneously released.