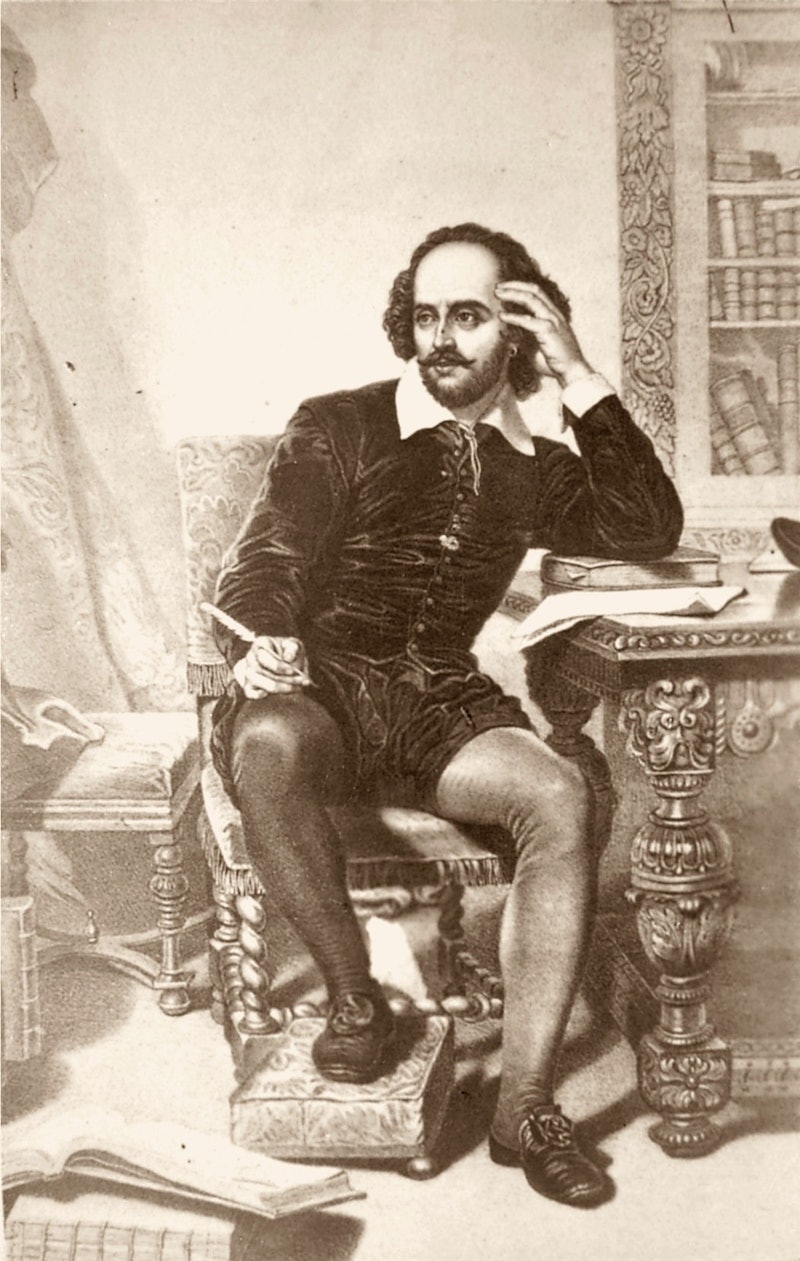 Shakespeare is everywhere. We've read his plays in high school, we've watch West Side Story alone in bed late at night, and we've suffered through our friends' experimental productions of Macbeth in college. We probably quote Shakespeare every day, without even realizing it (dude coined over 1700 words, after all). But who was the man behind the vocabulary? How much do we really know about William Shakespeare's life and work? How many of these twelve myths about Shakespeare have you heard stated as fact?

I'll be honest: I'm a shameless dork for Shakespeare. I've definitely been that annoying kid in your Shakespeare class who feels the need to point out the linguistic difference between thou and you (it's genuinely interesting!). When I'm not writing, I'm acting in productions of Shakespeare for little to no money. And, full disclosure, both of my parents are Shakespearean actors (so I never really stood a chance). It's no wonder, then, that I get antsy when anyone starts spreading misconceptions about Will and his work. If you are also a full on Shakespeare-loving literary nerd, I invite you to join me in being that guy who constantly corrects everyone else's Shakespeare facts.

So, in honor of Shakespeare's 400th death-day, here are some shameless lies that have been told about the bard:

This one makes me grind my teeth like no other. We know exactly who wrote Shakespeare's plays: a man named William Shakespeare. There's actually a ton of evidence to prove that. So why do people like to argue that Shakespeare was secretly Sir Francis Bacon or the Earl of Oxford or two eight-year-olds in a trench coat? Well, because historical mysteries are fun, for one. But really, it's pure classicism: people think that a mere commoner like Will Shakespeare could never have been the towering genius behind Hamlet and Othello. It must have been a rich guy like Bacon or Oxford, right? Despite the complete lack of evidence behind those claims? Sorry, folks, but money and status are not prerequisites for artistic talent.

2. Myth: He was uneducated and/or highly educated

A lot of people assume that Shakespeare had a great deal of education because of his many references to Latin, history, and mythology. Others claim that he had a paltry education, because his contemporary frenemy Ben Jonson wrote that Shakespeare had "small Latin and less Greek." But the shocking truth is this: Shakespeare had a normal amount of education for someone of his class. He attended the Stratford grammar school until age thirteen and that was it. But it was standard for elementary-level kids to learn Latin and Ancient Greek at the time. Jonson was from a higher class and went to university, hence why he acted like a huge douche about Shakespeare's level of education.

3. Myth: He was a full-time writer

Not exactly. Shakespeare was also an actor, and he definitely acted in his own plays. But over the years, academics played down Shakespeare's role as an actor, because actors were held in low esteem by the upper crust types. Acting wasn't even allowed in the city of London: the Globe and most other theaters were located just outside the city, along with all the brothels and gambling parlors.

4. Myth: He was an Elizabethan

Well... he was kind of an Elizabethan. He certainly performed for Queen Elizabeth I at court, and she liked the character of Falstaff so much that she commissioned The Merry Wives of Windsor. But Shakespeare was also a Jacobean. His plays were mostly performed and, eventually, published in the Jacobean era. He also performed for King James, and there's a whole scene in Macbeth where the witches foretell a super cool and handsome king from Scotland named James who's going to be the best ever (basically Shakespeare was a huge suck up).

5. Myth: He died on his birthday

Ok, this one is a maybe. We know that he died on April 23rd, 1616, but no one knows his exact birthday. He was baptized on April 26th, though, and most babies were baptized at the age of three days. So he probably died on his birthday. Sorry, Shakespeare.

6. Myth: He was highbrow

We think of Shakespeare's writing as highbrow today, but in his own time, he was pop culture. Shakespeare was not a nobleman, he was a middle class punk who wore an earring, and he wrote for the masses. Yes, Kings and Queens watched his plays too, and yes, his writing is wildly intelligent. But it's also full of dick jokes, blood, and farts. Poor people could pay a penny to see his plays, and they regularly drank, yelled, and threw fruit during the performances.

7. Myth: He was a huge celebrity

His plays were popular, and he made money off of them. He was probably decently well-known in his time but his death did not cause a huge stir. He wasn't considered a national treasure. A few years later, Shakespeare's friend Richard Burbage died, and there was a HUGE outcry. Burbage was a more popular actor, and England was devastated to lose him. Acting wasn't a noble profession, but actors were still popular with regular people, and Burbage (who played Hamlet, Othello, and Lear), was a big deal. Definitely a bigger deal than some hack writer like Shakespeare.

8. Myth: He invented a bunch of original stories

Eh. Not so much. He stole a lot of plots from history, mythology, and other writers. Plays like Romeo and Juliet, Hamlet, Macbeth, King Lear, and so forth all have source material. Shakespeare may have even stolen the plot of a play called The Taming of a Shrew for his play, The Taming of the Shrew. But we can forgive him for his lack of originality, because his plays were usually a lot more fun than the stories they're based on.

9. Myth: He didn’t care about his family

A lot of people know that Shakespeare was likely having an affair with the Dark Lady (and perhaps some gentlemen) from his sonnets. He left his wife, Anne Hathaway, his second-best bed in his will... so yes, he wasn't the best husband. But there is evidence that he loved his kids, even if he wasn't a great dad. He had three children: Susanna, and the twins Hamnet and Judith. Hamnet died at age eleven, and Shakespeare wrote Hamlet soon after (Hamnet and Hamlet are variations of the same name). There's a good chance that his son's death inspired the play. And Shakespeare's last acting role might have been the ghost of Hamlet's father in Hamlet.

Nope. He wrote in Modern English. Pick up Beowulf if you want to see some actual Old English (it's a completely different language). Shakespeare's writing just seems antiquated to us now because it's 400 years old. He actually helped invent Modern English—he coined over 1700 words still used today.

Well, ok, he did change theatre forever. But it's not like Shakespeare inspired a whole generation of plays in the style of Shakespeare—his frenemy Ben Jonson was the playwright who had a huge influence on other Jacobean playwrights. Shakespeare's writing was in a class of its own: he didn't create a new genre of plays, or change the way that plays were written in his own time. People regarded him as more of an outlier than a revolution in writing. But then again, he's remembered just a tad more often than Ben Jonson these days.

More like this
14 Scary Campfire Stories To Tell Your Friends
By Charlotte Ahlin and Kaitlyn Wylde
She Founded American Girl To “Bring History Alive.” Then She Made Over A Town.
By Amanda FitzSimons
Alan Rickman's Diary Reveals Why He Considered Leaving 'Harry Potter'
By Darshita Goyal
Read The First Pages Of Emma Rosenblum’s Highly Anticipated Debut, 'Bad Summer People'
By Samantha Leach
Get Even More From Bustle — Sign Up For The Newsletter