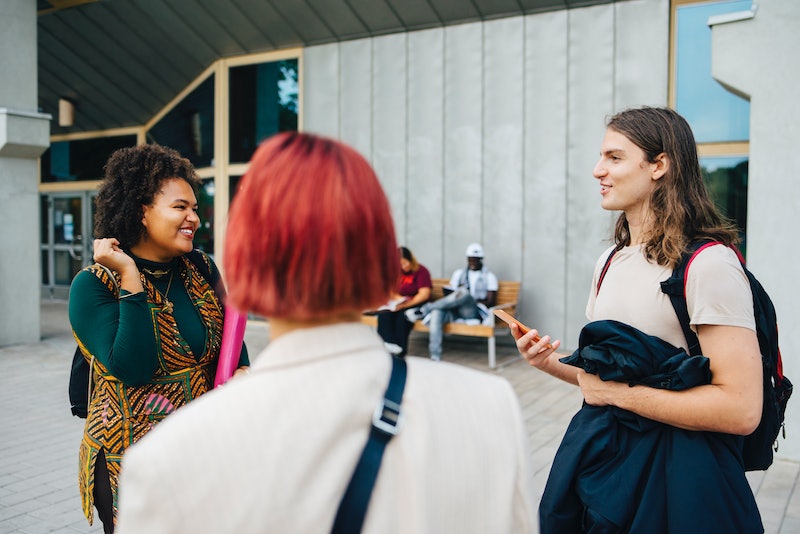 I have a group of friends from mixed backgrounds, beliefs and political values. When it's not an election year, our conversations tend to be spirited and dynamic. When it is an election year, our conversations fluctuate between lockjaw politeness and social blood bath. By the time our dinner check comes, our eyes are fiery and our knuckles are clenched as we not-so-secretly text more like-minded people under the table for support. With a heavy heart, I ask, what do you do when your best friend of over two decades wants to "Make America Great Again"?

While I wouldn't call myself particularly politically-inclined or active person, the small set of beliefs and opinions that I do have course through my veins like boiling blood when they're scrutinized. In my day-to-day life, I'm only surrounded by people who have relatively similar beliefs. I'm not sure which came first, the close friends or the matching opinions, but it never fails to surprise me when I'm around people with opposing beliefs. I work from home, live with like-minded liberals and don't watch too much of the news, so when I leave the house I'm perpetually whipped in the face with a gust of truth I can't swallow — wait a minute, Trump isn't a hoax and there are still republicans out there?

Within the circle of people I love is: a young woman who believes abortion is murder, a young man who believes Obama ruined the greatness Bush left behind, a woman who likes Trump's hutzpah, a man who has "proof" that Obama is a reptilian, a man who doesn't feel comfortable with a woman leading the country, and a woman who just isn't a fan of Hillary on Twitter. So every three and a half years, I have to make a choice: do I end these friendships because I cannot stomach their beliefs, or do I mute the politics thread and carry on?

At this point in my life, where valuing friendship is a priority, I've decided ignorance is bliss. If we don't discuss our political beliefs over dinner especially in large, boisterous group, we're OK. So that's the plan for now — remain friends, detain politics. If you can't bite your tongue and for you ignorance comes without bliss, these are seven times it's OK to talk about politics with your friends:

When You Have The Facts

Before you present something as a fact, make sure you've done your research. One of the biggest issues with political debates is that there's so much data thrown around, people are more likely to take the information at face value than take the time to verify its validity. Set a high standard by getting your facts straight.

When You're Feeling Open-Minded

If you're feeling stubborn, politely decline a politically-charged conversation. The only way to have this type of conversation with a friend without losing blood is to come into it with an open mind. You don't have to be open to changing parties or even candidates, but you do have to be open to the concept that your friend might have sound logic behind their beliefs as they pertain to their own lives.

When You're Not At Work

Unless you have the composure of a jungle cat, do not indulge in a political conversation in your place of work. You do not want to offend or insult the people who are in charge of furthering your career or paying your bills. If a conversation is already in motion, avoid it with a trip to the bathroom. If your co-worker is trying to lure you in, fight the temptation and pass. Plead the fifth, it's your right!

When You Don't Have An Agenda

Don't be that guy who baits someone into a conversation with an agenda. You can't change your friends so don't talk to them about politics if you're only doing it with the hopes of changing their minds. There should be no objective other than the shared illumination of beliefs. Don't try to trick your friends into sharing your beliefs, they'll only resent you.

When You're Not In A Rush

The other day a good friend of mine asked me if I was excited to vote for someone she knew I wasn't going to vote for. I was on my way out the door and decided it wasn't the best time to have a conversation about something so important. It was a classic piece of political bait — she said something she knew would hit the boiler — but I knew better, took a deep breath and promised I'd get back to her when I had more time to consider my response. Politics should never be hasty.

When You're Not Hangry

Don't do anything when you're hungry but definitely don't talk about politics with your friends. Whatever elegance you usually have around the subject will be out the door. You'll end up calling anyone who disagrees with you an idiot and it will be hard to recover from it. Eat before engaging.

When You're Not Feeling Emotional

It's easy to offend people when talking about politics. It's one of the most impersonal personal conversations there is to have. Someone's beliefs can directly work against your rights, which can feel very personal. If you've had a long day and are feeling emotionally worn down, don't mention politics around someone who doesn't share the same beliefs. One or both of you will end up in tears.