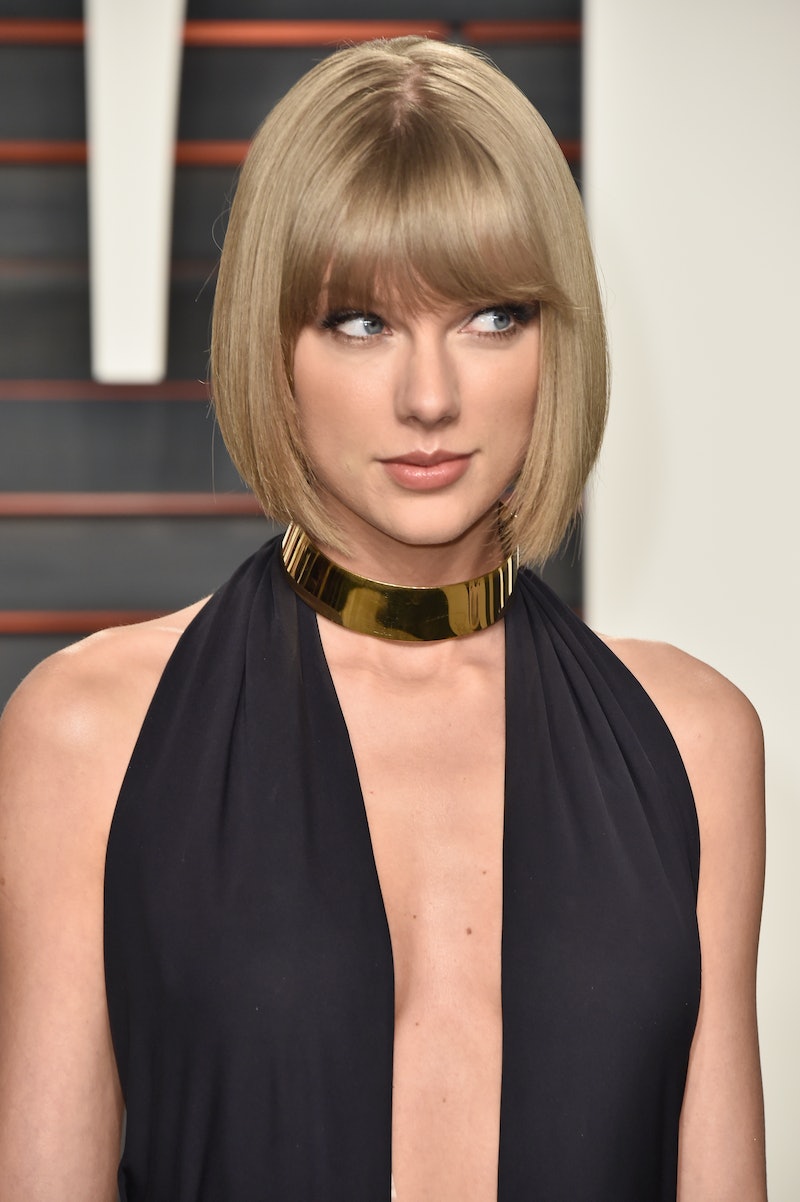 It's been six years since Taylor Swift released "Mine," the lead single on her 2010 album Speak Now, but it still finds ways to weave itself into her life in 2016 — even, perhaps, unknowingly. Specifically, when Taylor Swift discussed her relationship with Calvin Harris in the newest issue of Vogue, I couldn't help but notice that the way she described him was crazy similar to the lyrics in her song. Calvin Harris (real name: Adam Wiles) may be the best thing that's even been hers.

Swift, who recently celebrated her one-year anniversary with the Scottish DJ by vacationing to an idyllic beach locale, writing their initials in the sand, and documenting the whole thing on Instagram, has not been shy about what Harris means to her. She recently gave him a shoutout at the 2016 iHeartRadio Music Awards, thanking him for being the exact kind of person she wants to come home to after a world tour. So is it any surprise that the way she described their relationship to the Vogue writer was by using the word "magical"?

"I’m just taking things as they come," she said in response to being asked about her own wedding in the future. "I’m in a magical relationship right now. And of course I want it to be ours, and low-key ... this is the one thing that’s been mine about my personal life."

The way T. Swift phrased her response to that question reads a lot like her lyrics in "Mine" — specifically the line, "You are the best thing that's ever been mine." While it's a little bit unclear if she's talking about her wedding in this answer or about her relationship with Harris ("I want it to be ours, and low-key," and "the one thing that's been mine about my personal life" could easily apply to both), I love the way she uses possessive adjectives here. Not in the sense of "I own you" (Taylor Swift identifies as a feminist and would not be down with that), but in a way that comments on how they just fit together, in their own personal space in the world. Referring to something as "mine" — at least how I'd phrase it — doesn't necessarily mean that I have ownership over it, moreso that it's just very me. It's mine because it's me and it works, effortlessly.

In describing the story behind "Mine," Swift revealed during a livestream in 2010 that it's based on her "tendency to run from love" — and the idea of a guy who is the exception to that rule.

It’s a song that is about … my tendency to run from love. It’s been sort of a recent tendency. I think it’s because that, for me, every really direct example of love that I’ve had in front of me has ended in goodbye, has ended in breakups. I think I’ve developed this pattern of sort of running away when it comes time to fall in love and to stay in a relationship. The song is sort of about finding the exception to that and finding someone who would make you believe in love and realize that it could work out.

While 2010 Taylor Swift may not have had Calvin Harris in mind (the guy she was thinking of in "Mine" was a crush at the time), it's interesting to see how things work out in life — and how he clearly fits the song's description in this era of Taylor Swift.

Was it a coincidence that she used the phrases "mine" and "ours" when speaking of her love with Harris? Maybe, yes. Or maybe Taylor Swift (a genius with words and a wordsmith with the hints in those liner notes...) knew exactly what she was saying.