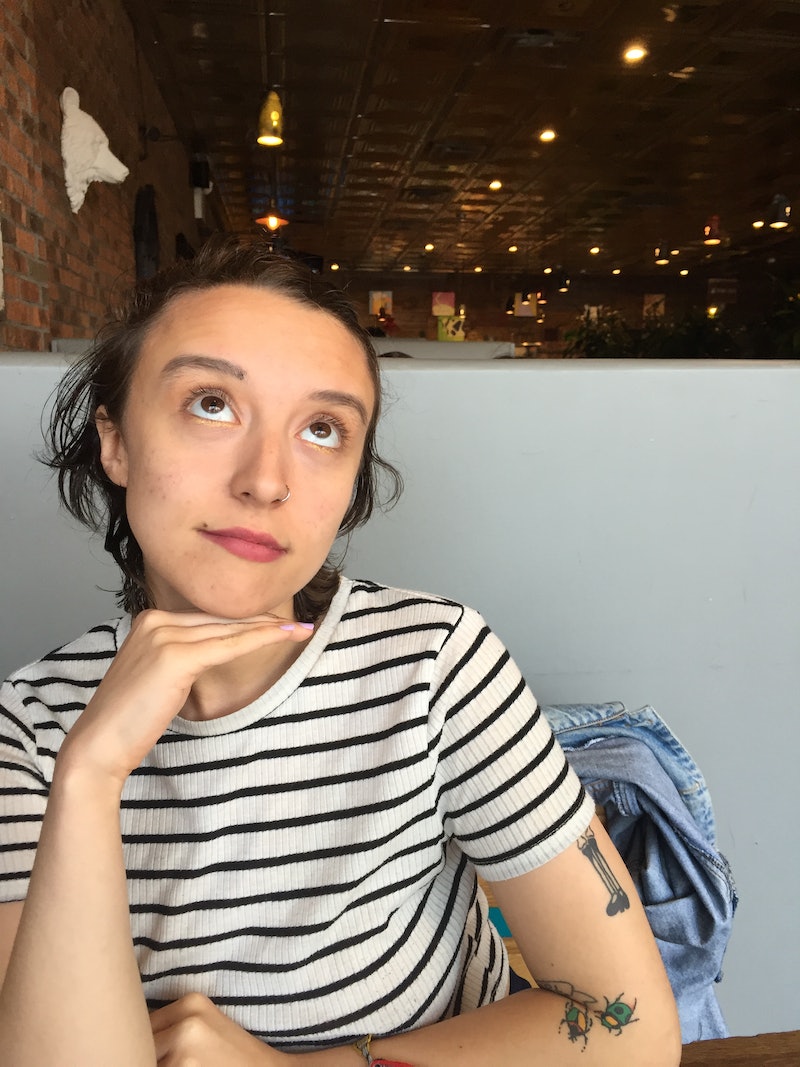 Since I began embracing body positivity in my writing and actions about a year ago, my perception of society and place in the world has changed drastically. Similar to what I experienced at the start of my exploration into feminism, looking at the world through a body pos lens definitely changed my life for the better. And like feminism, body pos is a radical movement centered around a constant expansion of our understanding of beauty, while growing the movement to be more inclusive to more and more types of bodies. So as body pos activists, we are constantly contemplating ways to advance or expand the movement, while also staying critical of our personal interpretations of it.

Personally, I'm constantly considering the ways in which I could alter my language and understanding to be more inclusive of all types of bodies around me, specifically bodies that are outside of my personal experience. It's also important for me to consider the ways in which the movement could better serve me, and figure out new and effective ways to show myself radical self-acceptance in the face of a plethora of insecurities, mental illness, and disabilities. And that means asking myself a lot of questions.

Like any radical movement, always thinking in a progressive manner like this can burn you out. It's important for activists to take care of themselves accordingly without guilt. After all, there is so much to think about and so much work to be done! But at the end of the day, I believe all the energy and time spent is completely worth it. If you're a body pos person, here are some of the tougher questions you've probably considered.

1. What Parts Of My Body Still Need Reclaiming?

The body is a vast and beautiful place. So with all this self love going around, it's easy to forget certain areas that may still need extra love. For me, my relationship with my skin, vagina, belly, and breasts are the most complicated, and therefore get the most time and attention. But I'm reminded every so often about my issues with other parts of myself, like my teeth or eyebrows. It can sometimes feel daunting, but remembering to send all areas of your body a bit of love when the timing feels right, as well as exploring activities you can do to embrace them one at a time, is endlessly important. All parts of you are equally important and worthy of love.

2. Can I Have Preferences?

Specifically in reference to my sex life, I often find myself feeling super guilty over having preferences with bodies. So much so that I often try to force myself to smooth away these inclinations in order for them to mirror my beliefs surrounding all bodies in a universal and non-sexual context. But the reality is we all have preferences. And that's OK. In the same way I prefer zero-penetration, being spanked and pegging in the bedroom, I also prefer vaginas, smaller breasts, and hairier bodies. Being aware of these preferences and allowing them to guide your sexual and dating experiences is perfectly normal in creating a safe and enjoyable experience for all.

However, at the same time it's also crucial to remember that preferences aren't everything, and that they can bend or break with time. I'm pansexual, but I usually prefer feminine bodies and vaginas. I also used to have a thing against people with blonde hair and lighter eyes for no reason at all really. But after meeting and falling in love with my current partner, I became completely obsessed with their masculine body and lighter features, despite my preferences still leaning towards my old ways (with the exception of my beautiful partner, of course). Part of loving somebody is accepting and loving their entire beings and bodies. And if your partner can't do that, or openly vocalizes the ways in which your body deviate from their preferences, then they are not worth your time.

3. Who Is My Body Positivity Leaving Out?

It's important for body pos activists to constantly consider which types of bodies they tend to leave out of their own conversations, as well as find ways to elevate the experiences of bodies that we don't necessarily relate to through unwavering support (rather than speaking on behalf of anyone who is outside of our own experiences). As a white and straight-sized person, I cannot begin to understand the struggle and hate that fat bodies and bodies of color endure on the daily. However, I spend hours reading articles and personal essays about the experiences of people in these bodies, and openly support their right to be called beautiful in my own writing and social media presence.

Figuring out the ways in which body positivity as a whole can expand further is just as important. As of late, there are certainly less conversations surrounding body positivity regarding race, ability, and gender identity. Additionally, the ways in which body positivity is currently not as accessible (thanks to the media, education, healthcare etc.) to certain marginalized populations and people coming from lower class backgrounds is something that we should all use some of our brainpower to solve. Constantly finding ways to revise and expand our definitions of beauty and body positivity is a crucial part of advancing our activism even further to reach the people who need it most.

4. How Do I Break My Old Body-Negative Habits For Good?

Sometimes, bad habits die hard. And no matter how much you live and breathe body positivity, you're likely to have many slip-ups. For me, I recently realized that I still choose clothes based on what I learned is most flattering on short, curvy girls while shopping. I finally became aware of it this past weekend, when I caught myself in a negative thought and chose instead to try on the garment that I "knew" with such conviction that I would look terrible in. I ended up buying the dress because I looked so cute in it, and felt a new chapter of my life approaching involving shopping that's less stressful and shaming.

It feels amazing to break these old habits through what we know about body positivity. But ultimately, we are embracing this movement because of the extensive background of body image and self love issues we all harbor from our pasts. We can likely never truly break all of our old body-negative habits for good. But becoming more and more aware of yourself, and altering thought patterns to ensure maximum enjoyment, certainly feels victorious.

5. Is That Actually Body Positive?

Sometimes, my friends will send me screenshots of ads, Facebook statuses or memes in a text, asking me, "is this body pos?" Truthfully, I don't always know since the line between body positivity and body negativity is blurrier than some may expect. I ask myself this question constantly, sometimes multiple times a day.

Personally, I'm super annoyed at people who value physical fitness, exercise and "eating clean," and spend at least half of their time talking about it to anyone who will listen. I know that eating healthy and exercising can certainly be body pos, but it's often hard for me to discern between body pos fitness and compulsive/shaming fitness. But then of course, there's also the idea that the person sharing fitness with others is their equivalent to the way I share body positivity with those around me. Besides, everyone has issues with their body image that I wouldn't want to trigger by expressing my discomfort with the subject.

I sometimes even question my own actions and applied interpretations of body positivity. For example, I fill in my eyebrows every day because it makes me feel valid and beautiful. However, why can't I feel the same way without the brow product's assistance? Is it inherently bad to love myself more in certain makeup, or should I be more of a purist? Most of these questions end in circular conversations with myself that are never quite resolved.

6. When Is The Best Time To Call Someone Out On Their Body Negative Language/Attitude?

This is an incredibly difficult question since it's probably universally understood that people express body negativity because they feel it themselves. Despite my frustration with certain people, I try not to pounce on them for their problematic speech since I have the privilege of removing myself from that discourse to one that is defined by self-love and friends who accept me entirely. Unless someone is directly attacking me, I try not to "call out" so much.

Instead, if I feel the situation calls for it or that it would be taken well, I simply share a random fact or say something nice, like "fat bodies are no less beautiful than other bodies," or "your hair is seriously gorgeous." Telling people that they deserve to love something about themselves has been received very well in my experience, since usually people don't believe certain parts of themselves are worth loving on a deeper level. Providing support and letting your friend or stranger know that this is a safe space for body image is pretty much all you can do.

7. Do I "Turn It Off" Around Certain People?

It's been difficult for me in the past to "turn off" my body positive beliefs in front of anyone. But like feminism, it simply isn't always appropriate or worth your time to express your body positive beliefs. When around professors, employees, and certain friends, I hold off from sharing my body pos perspective on something body negative someone said. Unless it's hurting someone directly or going to be solidified via publishing, I try not to say too much if my opinion isn't requested. But even in those moments, it feels like torture to stay silent when I hear fatphobic or racist remarks.

When around those that I love deeply, like my partner and family, I take care to lovingly correct their missteps when I notice a pattern (both my parents say lots of fatphobic things). I care about my loved ones, and want them to understand a concept they might not have otherwise grasped in the hopes of helping them be more confident and compassionate humans.

Ultimately, it's important to remember that none of us are perfect. We all have our days, our hangups, our concerns — but as long as we continue practicing critical reflection and gentle compassion with ourselves, we have nothing to truly be so concerned about.