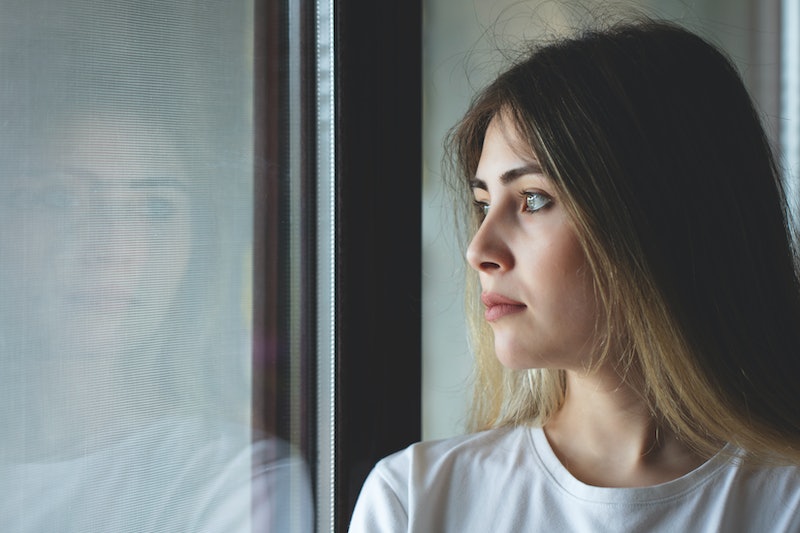 In modern society, perfectionism is usually seen as something to be celebrated; in fact, it's a fairly standard answer when job interviewers ask about "weaknesses" in the workplace. But when does the pursuit of perfection turn into signs of atelophobia, or the fear of imperfection? Like most psychiatric illnesses, the line between healthy behavior — in this case, perfectionism — and a phobia depends on the person. It's largely up to how much distress the fear causes; although most people dislike admitting to their flaws, someone with atelophobia would find the idea of doing something incorrect to be terrifying — maybe even paralyzingly so.

"There are people who consider themselves to be perfectionists, who would not consider [it] to be a problem at all. In fact, they would see it as an asset," Jennice Vilhauer, PhD, tells Bustle in a phone interview. "[Fear of imperfection] only becomes a problem when it gets into that spectrum where … it’s causing them to avoid things; it’s causing them to have a significant amount of emotional distress."

Considering how lightly people tend to take severe anxiety disorderes like obsessive compulsive disorder (OCD), this is an important distinction to make. Although perfectionism certainl has its drawbacks, atelophobia is more than just holding yourself to high standards — it's a deep-seated fear of imperfection that seriously impairs your life. Fortunately, researchers have long known that phobias are fairly easily treated with exposure therapy, in which patients are slowly introduced to feared objects or situations until they can experience them comfortably.

Let's take a look at five ways atelophobia can manifest below. As always, remember that the Internet is no place to receive a diagnosis; if any of the following behaviors seem too familiar, it's best to get a professional opinion.

1. You're Terrified Of Flaws

Most people are scared of making mistakes, but what elevates everyday fear into phobic territory is the extent of your reaction. People with atelophobia have disproportionately strong responses to the thought of imperfection — it's the difference between getting nervous before public speaking and skipping it entirely because the mere thought is terrifying.

"[Phobias] can be just a tremendous feeling of negative emotion where... they think, 'If I do that, I might die,'" Dr. Vilhauer says. It may sound irrational, but that doesn't mitigate the fear response.

Phobias are characterized by avoidant behavior; in other words, someone will go out of their way to avoid whatever scares them. In the case of atelophobia, this would mean steering clear of situations where you might make a mistake or come across as imperfect. It's important to note that atelophobia is not the same as social phobia, which involves a crippling fear of being scrutinized by others — people with social phobia fear judgment from others, while those with atelophobia are probably judging themselves.

According to WiseGeek, people with atelophobia are highly critical of their own work and as a result, they're usually on the lookout for their own mistakes. This could contribute to the following symptom:

4. You'd Rather Do Nothing Than Do Something Incorrectly

As discussed above, people with a phobia will find pretty creative ways to avoid what scares them. Unfortunately, fear of imperfection could apply to all kinds of situations, and avoiding them may simply mean putting things off. In short, atelophobes would rather do nothing than get something wrong by their own standards. Needless to say, this can cause serious difficulties in the workplace.

5. Your Fear Interferes With Your Life

Again, many of these behaviors are fairly common, which is why it's so important to understand the difference between everyday behavior and a phobia. Most people can get over their fears fairly quickly; they may not like it, but they're capable of facing them. Atelophobia, however, makes it much more difficult to function in society, whether it's an inability to put out work on time or difficulty maintaining relationships — and that's when it may be time to seek help.

More like this
This Psychological Effect Might Be Keeping You From Hitting Your Goals
By Lexi Inks
21 Signs You're Not In Love Anymore
By Sara Altschule, Kathleen Ferraro and Carolyn Steber
19 Latinx Therapists & Mental Health Experts To Follow On Instagram
By Kaitlyn Wylde, Naydeline Mejia and Lexi Inks
10 Ways To Be More Empathetic To Your Partner
By Raven Ishak and Lexi Inks
Get Even More From Bustle — Sign Up For The Newsletter