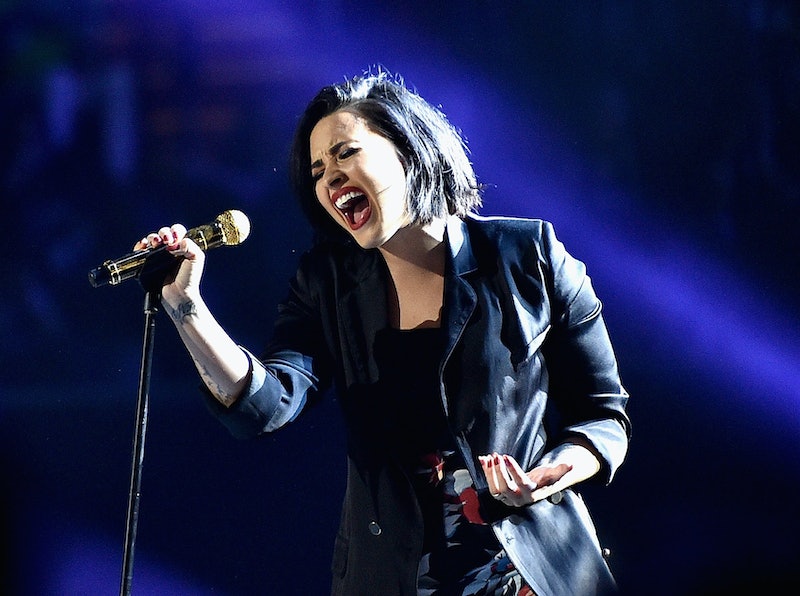 What happens when a beyond iconic disco song, a film adaptation of a popular mobile game, and a former Disney Channel star-turned-bonafide pop star join forces? Well, if the preview clip of Demi Lovato’s cover of “I Will Survive” is any indication, wond-bird-ful things (oof, I tried). On Thursday, the “Heart Attack” singer shared a snippet of her rendition of Gloria Gaynor’s legendary 1978 record, and in true Demi Lovato style, it’s an impressive performance. Lovato’s version of “I Will Survive” will appear on — wait for it — the Angry Birds movie soundtrack.

Now, what does this record have to do with a movie about a bunch of furious fledglings who use their own bodies to topple over the fortresses of evil pigs? What's its role in the flick? Where does it fit in?

After winning their final battle, the band of Angry Birds head over to local watering hole The Bird Feeder to celebrate. As his comrades shimmy up to the bar and order some beverages, Red waddles on over to the jukebox to pick a tune. As his eyes scan each page of the catalog, he feels his face grow hot. His feathers begin to ruffle. “None of these songs are right,” he mumbles. “I’m not going to settle for this bunk.”

And then, he sees it: “I Will Survive” as performed by Demi Lovato.

“I love Demi!” Red gasps. “And, duh, I love the original song! Let's give this a whirl! TAKE ALL OF MY MONEY ALREADY!” He jams some quarters into the jukebox, selects song G25, and flaps over to the other Angry Birds.

“Wait ’til you hear what I picked,” Red smiles.

“Don’t get your hopes up,” Bomb replies. “For all you know, there could be 60 song requests ahead of yours. We could be here all night without hearing the song.”

Red furrows his eyebrows and takes a swig of cider. “Don’t poo on my parade, Bomb.”

“Is this you?” Matilda asks.

The jukebox continues to play jam after jam, but Red's jam never shows up: The Angry Birds listen to “The Middle” by Jimmy Eat World, “My Way” by Usher, “Since U Been Gone” by Kelly Clarkson, “No Diggity” by Blackstreet, and so on. And just as Red is ready to get the check and call it a night, the Angry Birds hear those eight words: “At first I was afraid, I was petrified.”

“THIS IS IT!” Red bellows. As he whips around and smiles at the jukebox, he knocks a bowl of bar nuts onto the floor. The metal bowl clangs as it bounces off of the parquet. Everyone at the bar stares at him. “This is the song I picked!” Everyone in the bar gives Red a knowing nod.

The Angry Birds set down their drinks, clear away the bar stools, and break into a choreographed routine they did not know they knew. The rest of the patrons watch in awe. It's a beautiful moment.

"Is this a Demi cover?" Chuck asks without missing a dance step. "The song is pretty untouchable, but come on. I love Demi."