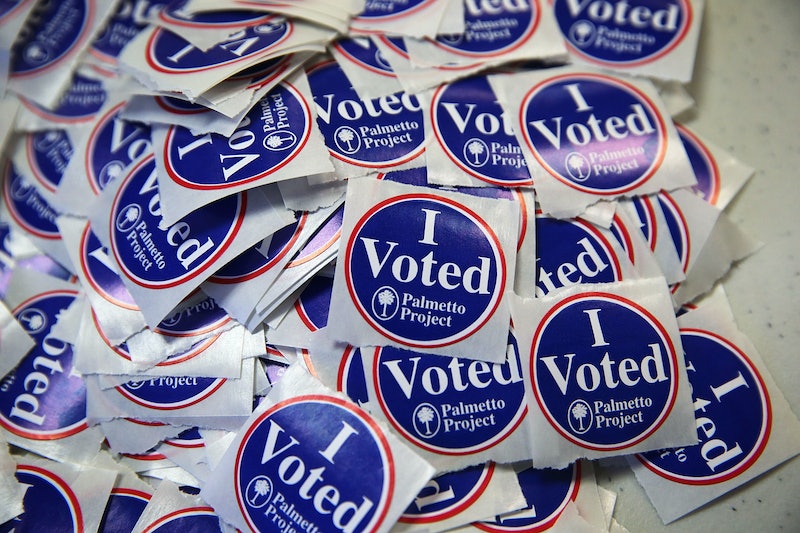 The New York primary received a significant amount of national attention earlier this week for its closed primary, but it wasn't the only one on the horizon. On Tuesday, five more primaries will take place, all in the northeast part of the country. So, is Connecticut a closed primary? Yep — the Democratic and Republican congressional, state, and presidential primaries are all closed in Connecticut, which means that affiliation with a political party is required to vote in these primaries.

For example, a voter who is registered as a Democrat in Connecticut can only vote for the Democratic presidential candidates in the primary, while a voter who is unaffiliated with any party cannot vote in any of the primaries. According to OpenPrimaries.org, 42 percent of Connecticut voters are unaffiliated. However, unaffiliated voters who want to register as Democrats or Republicans have the option to fill out a new voter registration form, and their new affiliation becomes effective immediately. Voters who are already affiliated with a specific party, though, can only change their party affiliation three months before the primary election.

Although early voting is not available, Connecticut's closed primaries have same-day registration, which means that if an unaffiliated voter were to miss the deadline to register for an election, they could register and vote in person on the day of the primary.

The closed primary has an impact on candidates' performance: Ahead of the Connecticut's Democratic primary, former Secretary of State Hillary Clinton leads Sanders 49 to 43 percent among likely Democratic voters in the state, according to a recent Emerson College Polling Society poll. But when Independent and Republican voters were factored into the data — voters who can't actually vote for the Democratic candidates during the primary — Sanders only trailed Clinton by a point. Nevertheless, this primary could prove to be a challenge for Clinton, who lost to President Obama in this state back in 2008.

Connecticut is not a particularly large state, so only 28 delegates are up for grabs on the Republican side, while Democrats will be competing for up to 55 delegates, according to the Associated Press.