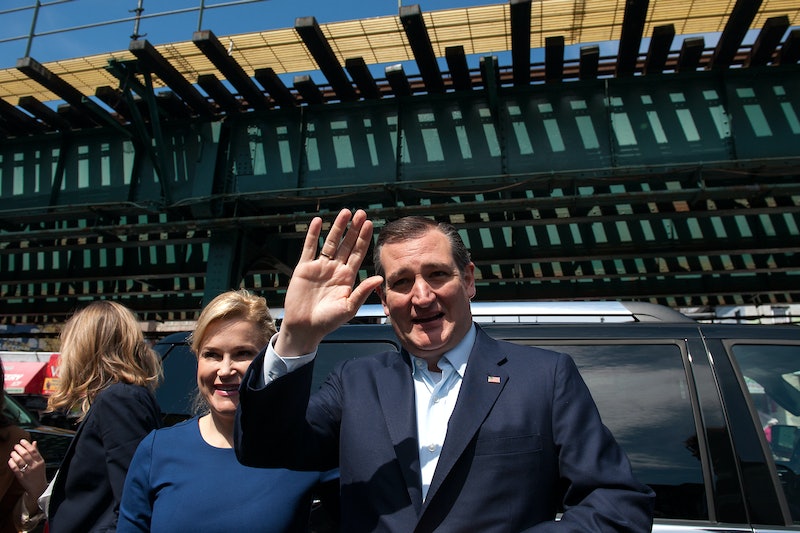 The 2016 presidential election has been weird, and the only thing necessary to back that statement up is acknowledging that Donald Trump has emerged as the GOP front-runner. Yikes. Ted Cruz has been trailing close behind Trump and many have said that Cruz is the Republican party's only chance to win the general election in November. Cruz has made it clear that he's conservative on a lot of issues like opposing same-sex marriage, denying climate change, and remaining staunchly anti-abortion. However, when it comes to buying cans of soup, Cruz is anything but conservative. After his honeymoon, Cruz bought 100 cans of soup, and now people are wondering, fairly enough: Is Ted Cruz an alien?

Heidi Cruz told the story during a CNN Town Hall and tried to explain her husband's odd, bulk grocery shopping habits. "I said, 'You don’t buy 100 of anything, much less canned soup. We can’t do this. I’ll be making things.' He said, 'No, I know you, you won’t be making things.'" So now that the world knows Cruz both presumed his wife wouldn't be cooking and he bought 100 cans of soup, Twitter has exploded with theories that Cruz is an alien, which is maybe true, but probably not.

It makes perfect sense: No sane human being would buy 100 cans of anything at one time. But, an alien sent to Earth to disguise himself as a human wouldn't know that no one actually does such a thing.

The Twitter speculations have skyrocketed since news broke of Cruz's bizarre purchase habits. Here are some of the best tweets explaining that Cruz is an alien, solely because he's a man who really, really likes buying in bulk:

Heidi was just as shocked by Cruz's 100-can purchase as you are. She packed up her car and returned all the soup the next morning. However, she told Anderson Cooper that when Cruz woke up to an empty soup cabinet, she vowed she'd go re-buy them.

Nothin' wrong with soup at all, but you have to admit the timing and the quantity is a little, um, out of this world.