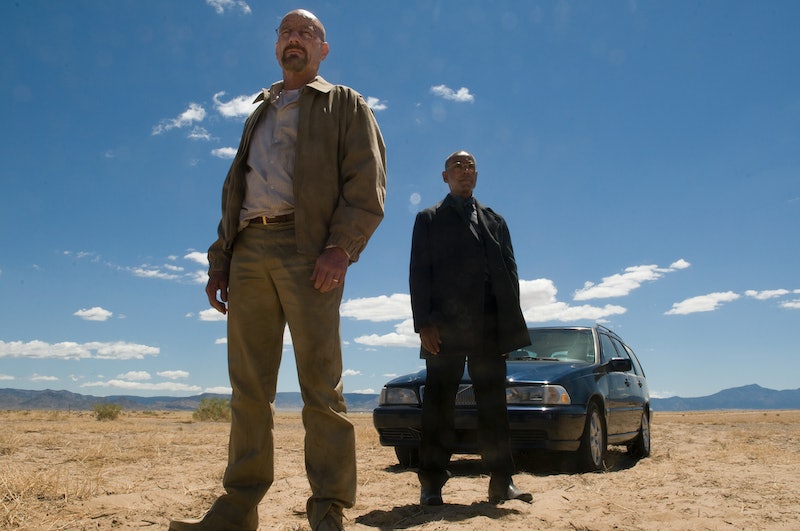 For fans of AMC's Breaking Bad, Season 2 of Better Call Saul has been littered with nods to the spinoff's parent series, from the appearance of villains like Hector and Tuco Salamanca and The Cousins to the first appearance of Saul Goodman's colorful suits and iconic commercials. But perhaps the most glaring reference to Breaking Bad may be one that passed by unnoticed, right under our noses… and it hints at an impending appearance by one of Breaking Bad's most memorable villains. Will Gus Fring cameo in the BCS season finale? He very well might — if Season 2's episode titles are any indication.

What do the episode titles have to do with the fictional philanthropist and Pollos Hermanos proprietor? Great question. Any ardent fan of creator Vince Gilligan probably knows that he occasionally likes to have fun with his titles. Last year, all but one of Season 1's episode titles ended in the letter "O" ("Uno," "Nacho," "Five-O," "Pimento"). But that's a mere quirk compared to what Gilligan pulled in Season 2 of Breaking Bad, when it turned out that the titles of all the episodes that opened with a black-and-white flashforward combined to create a clue for the climactic event of the season — "Seven Thirty-Seven," "Down," "Over," "ABQ" — referring to the collision of two airplanes in the sky above Albuquerque.

Well, it's possible that BCS Season 2 is hiding a similarly veiled hint within its seemingly innocuous titles. Behold:

What's up with that odd spelling of the word "click" in Episode 10's title? That anomaly must have caught the attention of eagle-eyed Twitter user @sirena6783, who quickly realized that the first letters of all the Season 2 episode titles form an anagram that, when unscrambled, spell…

That is either the coolest easter egg in the world or the most massive coincidence that has ever happened in the history of coincidences. So can we expect Gus Fring to pop up on the season finale, face intact?

Well, maybe; maybe not. While that certainly seems to be what the anagram implies, there's a possibility that things have changed since the code was originally conceived. According to The Hollywood Reporter, at Better Call Saul 's PaleyFest panel last month, Gilligan teased that, "We had a perfect opportunity for someone from our Breaking Bad universe to show up" during the Season 2 finale. But he quickly tempered enthusiasm by saying that opportunity hadn't panned out, and his BCS co-creator Peter Gould said, "It killed me, though. That would've been fun."

Of course, there's no guarantee that Fring is the "someone" that Gilligan was referring to. But throughout the first two seasons of BCS, he has been relatively stingy when it comes to direct connections to its parent seeries, so it seems unlikely that there would have been two major BB cameos in the finale. If Fring's appearance was cancelled, there's always a chance that he could pop up in the already-renewed Season 3; perhaps the "Fring's Back" anagram isn't a tease for the Season 2 finale, but rather a promise for the Season 3 premiere.