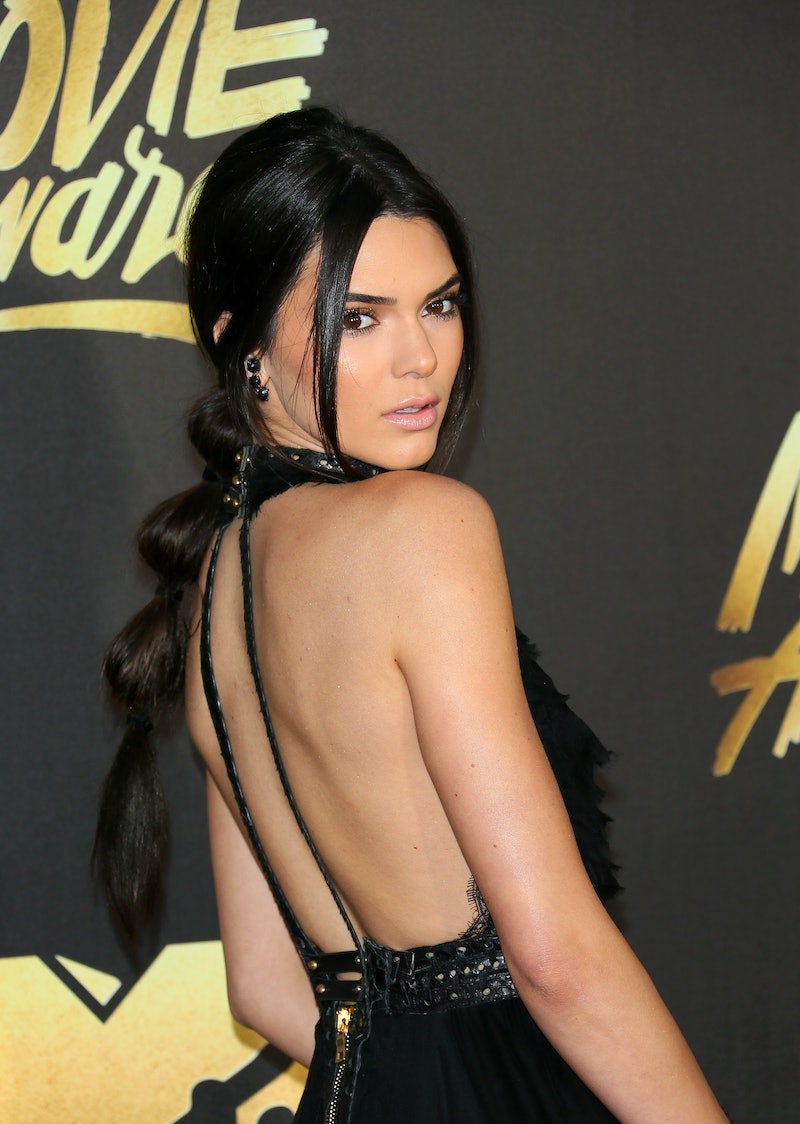 Sorry, Harry Styles: during Coachella's opening weekend, Kendall Jenner was spotted with a mystery man, and it looks like he might be the model's new boyfriend. But just who is Jordan Clarkson, and are he and Jenner definitely dating? It sure looks likely, as the two were spotted at Coachella getting rowdy — by which I mean that Clarkson jumped over Jenner's head (yes, really). The video of the stunt marks the couple's first "public" appearance, though rumors that the two are dating began surfacing in March when the pair were spotted on their way to LA's The Nice Guy, trying to be covert about it but not exactly succeeding.

Jenner's last major romance was reportedly with none other than One Direction's Styles, which is a hard act to follow — but Clarkson is a pretty big deal himself. The 23-year-old is an NBA player, a point guard for the Los Angeles Lakers, which would explain why he was so easily able to jump over the 5'10 Kendall in that video. In Clarkson's first year with the Lakers, he was named to the NBA All-Rookie First Team. The athlete has also been slightly involved with the current celeb scandal rocking his team, speaking out about D’Angelo Russell's accusation that fellow Lakers player Nick Young has been cheating on fiancée Iggy Azalea. Clarkson has remained loyal to his team by describing both teammates as his brothers, though he's acknowledged the difficulty of the situation, telling TMZ, "Both of them dudes my brothers. It’s a tough situation right now.”

Off the court, Clarkson recently started a basketball camp for aspiring players. The Filipino-American sports star also appears to be pretty invested in fashion if his sparse but stylish Instagram is any indication, so he and Jenner definitely have that to talk about, if they are indeed dating — or even if they're just friends.

Clarkson has previously been romantically linked to model and Dope star Chanel Iman, but here's hoping he and Jenner are the real thing. The reality star's sisters have notoriously dated quite a few basketball players, and Jenner has recently been spotted sitting courtside at Lakers games. This Coachella appearance is the first real sign of she and Clarkson hanging out together, which seems like a pretty good hint that the two are getting serious. So sorry, Kendall and Harry fans: it looks like that romance is officially over, and a new one is beginning.

More like this
Kendall Jenner & Devin Booker Reportedly Broke Up After 2 Years Of Dating
By Jordyn Tilchen
Photos Of The 'Elvis' Cast vs. Their IRL Counterparts Will Have You All Shook Up
By Grace Wehniainen
Here’s How Lizzo Is Supporting Abortion Rights After The Roe v. Wade Reversal
By Brad Witter
Emilia Clarke Remembers Her Broadway Debut As A “Catastrophic Failure”
By Stephanie Topacio Long
Get Even More From Bustle — Sign Up For The Newsletter