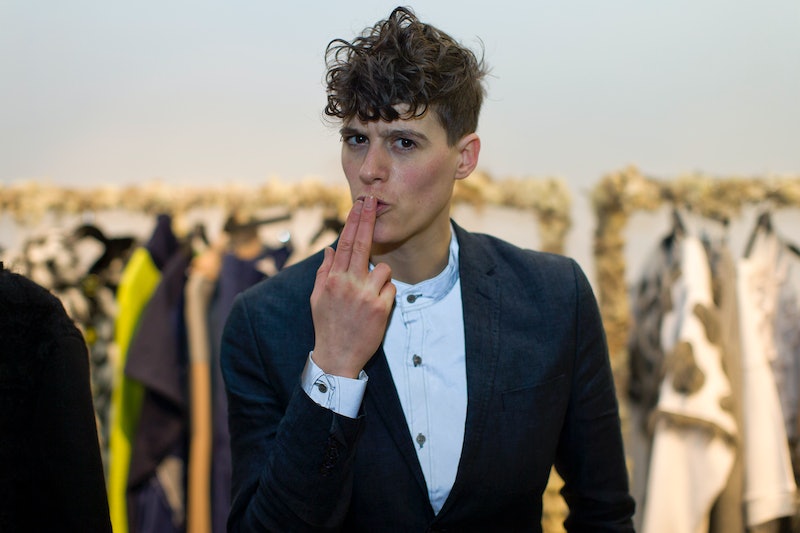 If you're gender-nonconforming or trans, you're likely pretty frustrated (to say the least) about North Carolina's House Bill 2 (or the Public Facilities Privacy and Security Act), which brings transphobia in public spaces to a whole new level. H.B. 2 establishes that bathrooms in public buildings, schools, and government agencies are designated for use based on the "biological sex" stated on one's birth certificate. However, this troubling new law isn't only transphobic in the way that it forces trans people to choose a bathroom based on their genitalia. It also limits the family members of elderly or disabled people from assisting them in public bathrooms.

Update: As of Tuesday, April 26, North Carolina's H.B. 2 has been amended to make arrangements for people with disabilities who need bathroom assistance.

A wide range of people, from musicians to politicians, are taking a stand against H.B. 2. Even Republican frontrunner Donald Trump (sort of) spoke out against it (before then backpedaling). Thankfully, people other than The Donald have been far more vocal. One of the most outspoken is activist Rain Dove. On April 17, she demonstrated at the North Carolina State Legislative Building in Raleigh.

As both an androgynous model breaking boundaries in the fashion industry and a committed activist, Rain Dove has long prioritized the voices and issues of trans and gender-nonconforming people (as evidenced by her gender-politics-driven Instagram posts). A few of these posts expressed her frustration over H.B. 2, which compelled her to fly overseas from her current residence in London to protest.

Rain Dove was further fueled by how North Carolina Gov. Pat McCrory recently passed Executive Order 93 in response — which, based on his misunderstanding of the difference between gender and sex, didn't generate much change regarding the "biological sex" rule. McCrory's interchangeable use of the words "sex" and "gender" suggests that he doesn't have a full grasp on their definitions. (Sex refers to biological and physical traits, while gender refers to one’s internal sense of self and their relation to the social and cultural traits that are typically assigned to sexes.) The North Carolina government's press office did not respond to Bustle's request for comment via phone or email.

Determined to level with the North Carolina government in a calm and helpful manner, Rain Dove sought to focus the protest on education. After reaching out to friends in North Carolina and raising awareness on her social media accounts, Rain Dove assembled a team of 10 people affected by H.B. 2 to conduct a peaceful sit-in in the third-floor bathrooms of the North Carolina Legislative Building.

"We are also posting educational reading material on the back of all of the bathroom doors for senators who use them," Dove told Bustle over text message before Sunday's protest, "[so they can] read up on the difference between sex and gender, as well as definitions of various types of identities."

During a Periscope broadcast on Sunday, Rain Dove paused at the 49-minute mark for a moment of silence for trans people and the community's high rate of suicide attempts. "49 percent of transgender individuals attempt to commit suicide due to social pressures and due to the rejection from society, and bills like this are only going to make that statistic higher," she said.

A large part of the protest was to argue that the new bathroom rules in North Carolina also affect those outside the trans community. It's not discussed as much, but H.B. 2 doesn't only affect the queer population. It also affects elderly people and disabled people — like Skeeter, 46, who has Parkinson's and was one of the protesters who joined Rain Dove. Skeeter tells Bustle: "[The bill] affects the disabled in that if you have a caregiver with the opposite genitals of yourself, they could not enter the restroom to take care of you."

Skeeter worries about how this bill will affect them once they decline enough in their health that they need someone to assist them in public bathrooms. But first and foremost, "I hope to say to the community at large that it is not just LGBTQ people that House Bill 2 affects."

State Sen. Paul Lowe Jr. spoke with Rain Dove this past week (she shared a picture of their meeting on Instagram). Rain Dove says Lowe told her he didn't even vote on House Bill 2 because he felt it was so obviously unjust. According to Rain Dove, Lowe admitted to not knowing the difference between "transsexual" and "transgender."

"He said the North Carolina Senate has no clue," Rain Dove says, "and that it's hard because LGBT organizations here are so intense that they are more hounding senators angrily than educating them about their communities openly."

Aym Icon, 28, an advocate for trans visibility, also participated in the protest on behalf of trans individuals like himself. Speaking before the demonstration, Icon tells Bustle, "My role will be as representative for all transgender individuals who cannot be out, and live in fear precipitated by bills such as these." As a trans man, Icon knows the stress of using public bathrooms all too well. "I have never used the men's room publicly due to the fear I've associated with doing so. Now, political fear greatly influences me to remain that way. I can't stand for that for anyone," Icon says, adding,

"There are millions of scary places on Earth. The bathroom shouldn't be one of them."

Rain Dove and friends are certainly not alone in their fight, as there have been many protests against H.B. 2. Hundreds of students held a protest against the new law at University of North Carolina at Greensboro April 5. Bruce Springsteen and Ringo Starr canceled performances in the state, while Cyndi Lauper vowed to donate funds from her performance in North Carolina to repealing H.B. 2. Similarly, the band Against Me!, fronted by trans woman Laura Jane Grace, refused to cancel her North Carolina show coming up on May 15 in the hopes of raising awareness about the injustices of the bill. A number of other entertainers have also joined the fight.

As Rain Dove said in one of her latest Instagram posts, "Male, female, anything in between- if you're a human then reading or hearing news of the #HB2 law should concern you." And it's true. People of all genders should be concerned about how this law can affect them and their loved ones. Going forward, I believe we also need to expand our understanding beyond binary gender identities, and work on the creation of more gender-neutral bathrooms for those of us who are in between.