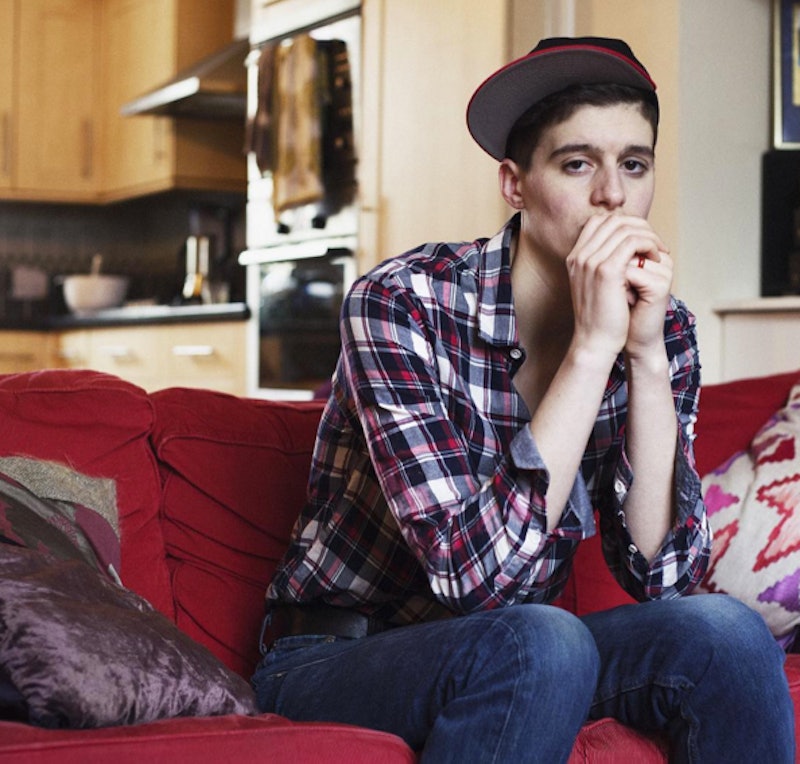 Since coming out to the world as genderqueer, visibility has taken great priority in my life. As a person active in the media, I try to do my part by writing extensively about gender nonconforming identities. Model Rain Dove has undoubtedly played a huge role in encouraging me to discuss preferred pronouns and the gender binary without apology. Not only does she break boundaries with her career as a gender fluid model, but she also spreads words about androgyny, gendered double standards, and genderqueer people through her Instagram posts. They are often chock-full of powerful messages created to explain the limits of defined gender to folks who may not be as hip to these conversations.

Her posts usually make excellent points about body hair maintenance, catcalling, transphobia, and more, as she embraces her beautiful gender fluid appearance in all of its manifestations. Furthermore, Dove has a unique perspective on the world and on gender relations since her androgynous look allows her to sometimes experience life as both a man and a woman aesthetically.

Through this amazing fluidity, she can further explore the gender double standards that so often divide cultures and tend to oppress those who fall outside of certain expectations. From my experiences, Dove's posts have been incredibly affirming for genderqueer people like me. At the very least, they are fun statements to observe in their boldness and unapologetic tendencies. Here are some of the important topics the model has covered recently via her Instagram.

The state of North Carolina recently passed HB 2 (otherwise known as the Public Facilities Privacy and Security Act), which requires trans people to use public restrooms according to what gender they were assigned at birth.

With her split photo — masculine on the left and feminine on the right — Dove maintained that your assigned gender is not always indicative of your actual identity. Her point was further exemplified through her androgynous appearance, as she could have easily been mistaken for a man in the left image. The end point? Don't assume or police people's genders.

When it comes to gender-fluid identities, it's common for folks not to feel like just one gender. Dove reflects this in her wardrobe, expressing a collage of gender expressions often through just one look. Furthermore, she makes the point that clothes are just clothes, and that assigning gender to fabric doesn't make much logical sense. Ultimately, you should be allowed to claim whatever look, style, or gender you feel in tune with.

Here, Dove addressed the age-old issue of how women are often treated regarding their expression of emotions. She pointed out the problematic discrepancy between how angry men are perceived as passionate, while angry women are often seen as "domineering, bitchy, naggy." Her gender fluidity further complicates this trope, since Dove herself experiences both polarities based on how she's presenting or what she's identifying as on any given day.

Recently, Dove conducted an experiment in London for which she walked the streets at night in her flashiest menswear, and then did the same in her simplest black dress. The results, which involved getting way more attention and comments in the dress, helped demonstrate why she often feels she must wear more masculine attire during a night out drinking in order to feel safe. Undiscouraged, she ended the post with, "We will change that soon though!"

As a feminine-appearing person who doesn't shave, I'm very familiar with the frustration of the body hair maintenance double standard. In this post, Dove highlighted the different ways people often perceive men with leg hair ("they say nothing"), and the way they regularly perceive women with leg hair ("that's gross," "you're brave," and everything in between).

6. The Association Of Women & Feminine People With Weakness

Dove was a firefighter before modeling, after which activism became the focal point of her life. She highlighted in this post the difference in how people react to her past (a job associated with physical strength) based on what she's wearing. Since women are clearly the weaker of the sexes, she gets way more praise about her rad firefighting past when she's presenting as a woman.

7. The Frustration That Is Catcalling

In yet another experiment she conducted, Dove determined that it took her way longer to move through the same space while wearing a dress versus something more conventionally masculine thanks to all the times she was stopped or catcalled. She showcased here not only the frustration and potential danger of moving through a space as feminine person, but also how time-consuming and psychologically trying being catcalled can be.

When Dove participated in London's Men's Week in fall 2015, she refused to bind her chest. As she expressed in the caption of this image, "I REFUSE to bind my chest just to look more 'manly.' My tits don't define my sex and they got swagger." For any gender nonconforming or trans kids with breasts, this was an incredibly affirming reminder that our bodies do not determine our genders.

Piggybacking off of her previous point, breasts not only don't have to be feminine, but they also don't have to be "breasts." She's referred to her breasts countless times as the "largest pecs in the industry" via social media, and I love that. Her disregard for gendered social constructions and her determination to bend our perceptions of ourselves are endlessly inspiring to my genderqueer self.

10. The Political Nature Of GNC Fashion Can Be Tiring

In this post, she pointed out how existing as a gender nonconforming person (or a person with multiple gender presentations) and genderqueer fashion can be so political. "Small changes in style and attitude can create HUGE #Changes in society's attitude towards a person. Why does it have to be so political? We are not both. We are ALL!" I feel you, Rain Dove.

11. Femininity Is Whatever You Want It To Be

Society's very narrow perception of femininity is quite limiting for a lot of folks, but especially those who are gender nonconforming, gender fluid, or express their femininity in alternative ways. In this post, Dove proved the notion that femininity can look like a variety of things.