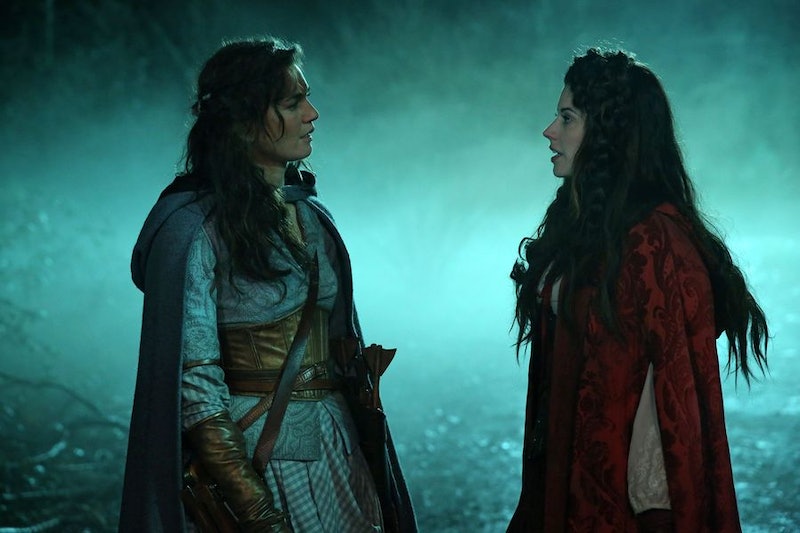 When I found out that Ruby was returning to Once Upon a Time , I was obviously excited. Not only is she Snow White's bestie, but she's also fiercely independent and not afraid to fight for what she wants. So when this red-hooded character quite literally fell into the Underworld, it had to be for an important reason, and it was. She was on a mission to save Dorothy from a sleeping curse that Zelena cast upon her during her last trip back to Oz. However, as it turns out, what she needed to wake Dorothy up was actually with her all along: true love's kiss. That's right, my friends — Ruby is in love with Dorothy and apparently the feeling is very much mutual. So you know what that means... Once Upon a Time has finally introduced its first official LGBT relationship!

While traveling with Mulan to find her pack, they stumbled upon Dorothy chasing after Toto. Initially, Dorothy acted cold and distance to the new strangers, but soon realized how much she and Ruby had in common. They've both felt alone and unwanted; they've both been in search of fitting in; they've both faced major obstacles in life and become stronger women for it. All-in-all, they really do make for the perfect fit together. Ruby may have started out this journey looking for her pack, but in the end, it's Dorothy whom she'd been looking for all along.

Granted, I originally thought that Ruby and Mulan were going to be the ones who ended up falling in love, but I can't deny that they make for a pretty great pair as well. I mean, they already even have adorable nicknames for each other — Wolfy and Kansas. So with a few clicks of those famous magical slippers, Ruby was able to be by Dorothy's side back in Oz and give her the true love's kiss she needed in order to wake up. So at least we can take solace in knowing that at least one couple on this show seems to be getting a happy ending. Let's just hope it lasts.