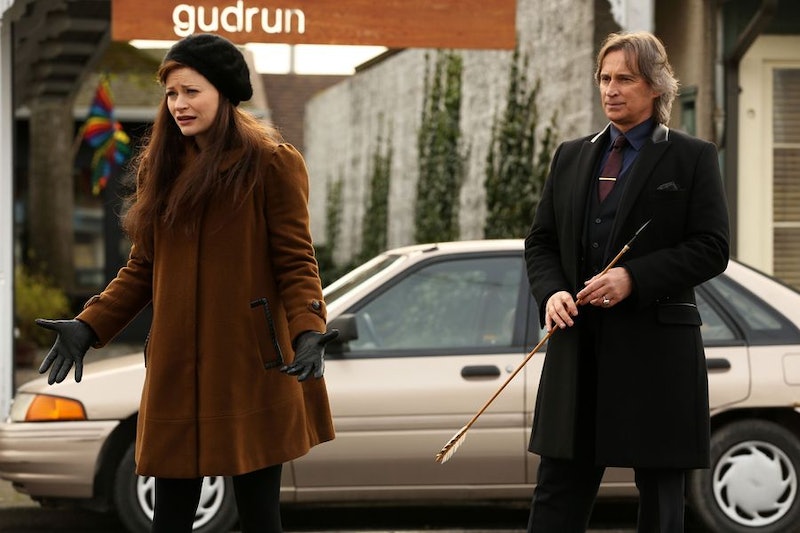 After last Sunday's episode, I was really starting to feel great about Belle's overall portrayal on Once Upon a Time . Viewers actually got to see her taking charge of her life rather than just keeping her nose inside of a book. However, this week's episode of "Ruby Slippers" left me feeling kinda disappointed with her latest decision. You see, Belle was growing more and more worried about Hades taking her baby away — a dread which became even more prominent when she learned (via Zelena) that a pregnancy can be magically fast-forwarded, meaning that time wasn't even on her side. That's when Zelena suggested that Belle put herself under a sleeping curse in order to stop any of that from coming to fruition.

You see, being placed under a sleeping curse means that the person's entire body becomes suspended throughout space and time. So as long as Belle remains asleep, her pregnancy is paused and there's nothing Hades can do about it. Now, of course, Rumple wanted to make this decision all about him, thinking that this was Belle's way of trying to get him to become a better man since she can only be awoken by true love's kiss. However, Belle assured him that she doesn't on having him wake her up. She intends for that job to go to her father back in Storybrooke. So once Rumple destroys the contract he made with Hades, she told him to do whatever it takes to get her back to her father. And just like that, she pricked her finger.

Now, I'm not saying that Belle's intentions weren't honorable because her heart is definitely in the right place here. I'm just bummed that instead of trying to find a way to defeat Hades herself, she's leaving the heavy lifting entirely in Rumple's hands. I would've much preferred to see her take action instead of signing up for a who-knows-how-long snooze fest. (Though that does sound pretty appealing right about now.)

I have a feeling this was all part of the writers' plan for explaining Belle's future absence on the show due to Emilie de Ravin's real life pregnancy/maternity leave, but I Still wish they had found another way to go about doing it. Her character has come so far on this show. I would've really liked to have seen her go toe-to-toe with Hades herself instead of relying on Rumple to save the day once again. Because if last week's episode taught us anything, it's that she's more than capable of saving herself.