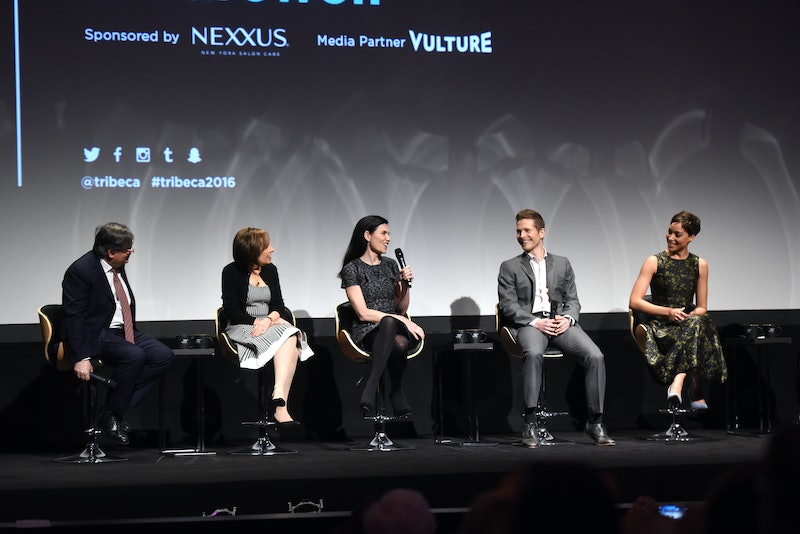 For several days now, rumors have been swirling that Josh Charles will return to The Good Wife for a (not-so-surprise) cameo in the May 8 series finale. Charles, whose character Will Gardner was gunned down in a shocking twist midway through Season 5, is reported to "appear opposite Julianne Margulies’ Alicia in a newly-created flashback sequence," according to TVLine. Co-creator and showrunner Michelle King addressed this rumor at The Good Wife 's Farewell panel at the Tribeca Film Festival this past Sunday, while the cast members in attendance — Matt Czuchry (Cary Agos), Cush Jumbo (Lucca Quinn), and Margulies herself — teased what to expect from the show's final episode, titled simply "End."

Frustratingly, King remained just as tight-lipped about the likelihood of her protagonist getting a happy ending. "Sure, there's always a chance," she hedged before adding that her answer wouldn't change if she'd been asked about the likelihood of Alicia getting an unhappy ending. For her part, Margulies just wants Alicia to "stay true to herself and try not to worry about who she was in the beginning of the series, and to see the developments that she's made — but without becoming hard."

Co-creator Robert King hinted that the impending finale might be slightly ambiguous. "I don't think the best finales have to wrap up all their loose ends. They are novelistic," he said. "And sometimes there's a level of ambiguity, which is fun. Fun is the wrong word," he corrected himself. "Resonant. You want a last episode that resonates. If you get to the last [episode] and you want to start over at the beginning, all 156 episodes… that's the triumph of a finale." He went on to list Six Feet Under, Breaking Bad, and The Sopranos as some of the shows whose finales exemplified this "resonance" for him.

Interestingly, the comparison to a novel was also used by creator John Ridley to describe the Season 2 finale of American Crime earlier this year, which divided viewers with a defiantly open-ended conclusion that left many lingering questions unanswered. Here's hoping TGW fans get a bit more closure than that. For her part, co-star Jumbo assured the audience that the Kings wouldn't leave us too in the cold with the finale. "They're not going to let you down. They're not going to sleep with you and walk away," she said. "They're going to cuddle you for a while… and then they're going to leave."

It certainly helps that the Kings have always had an end date in mind. Viewers have long had a hunch that the show would end after seven seasons, thanks to the pattern of episode titles (increasing from one-word the first season to four words in Season 4, then decreasing back down to one-word titles this year). Robert King confirmed as much during the panel, saying that The Good Wife always "felt like a show you had to end."

Finally, the panelists were asked to sum up the final episode in only three words. Robert King went literal with: "The end, unfortunately." (Michelle seconded his choice of words.) Czuchry went for clever alliteration with: "Good Wife, goodbye." Margulies got a bit more descriptive with: "Satisfying. Uplifting. Sad." And Jumbo closed things out with: "Happy. Sad. Sexy."

So two cast members described the finale as "sad"? Uh oh. Make sure you have a box of tissues handy when you tune in to "End" on May 8 at 9 p.m. I have a feeling tears are going to be flowing pretty freely that night, both onscreen and off.