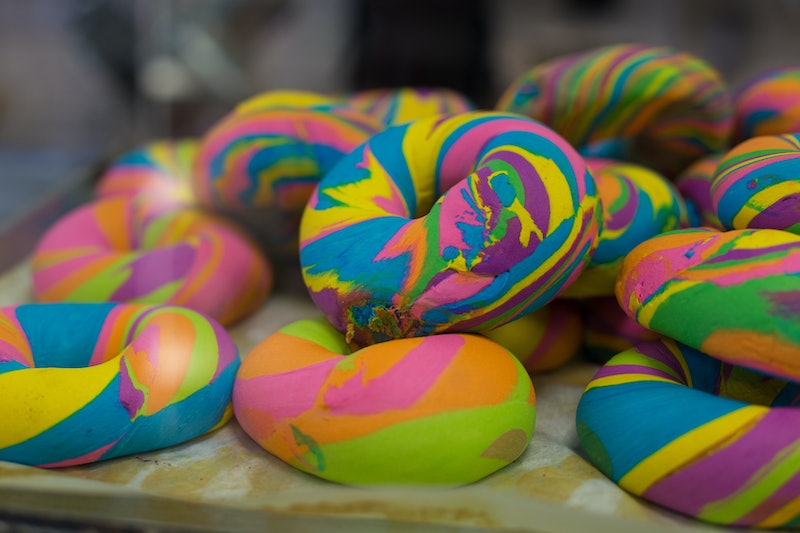 As a child of the '90s, rainbows hold a special place in my heart. Us '90s kids came of age, after all, in the era of Lisa Frank and tie-dye and My Little Pony, so I don't think I'm alone in knowing that rainbow grilled cheese would have 100 percent topped my list of after-school snacks. And let's be real, rainbow grilled cheese (which is a real thing, by the way) is now topping my list of after-work snacks. Or after-gym snacks. Or after-getting-home-and-taking-my-bra-off snacks. However you decide to split up your day or whatever.

Here's the, um, downside that perhaps I should have mentioned before getting you guys majorly amped: This rainbow grilled cheese is only being served in one city at one restaurant, and I have a feeling that most of you reading this are not close to it. I'm sorry. That was cruel of me.

Kala Toast in Hong Kong, who call themselves "The Cheese Toast Specialists," is the mastermind of this rainbow grilled cheese. It costs 42 HKD, roughly the equivalent of $5, and it is just as glorious as you think it is. Here, have a look:

According to food blogger @hkfoodiexblogger, each color also has a distinct flavor: Red is tomato, yellow is a combination of four cheeses (mozzarella, cheddar, emmental and gruyere), green is basil, and blue is lavender. I'm not totally sure how I feel about lavender in my grilled cheese, but honestly, I will eat a lot of things if I think they look pretty, so... let's just say that it's unlikely my reticence toward that particular ingredient would stop me if I had access to this thing.

Since I know that you are all weeping at your desks (because while $5 is a fantastic price, a ticket to Hong Kong is a little, um, pricier), here are a few more rainbow-hued treats a little bit closer to home. My stomach is about to look like that spooky rainbow Snapchat filter and I can't waaaaaaait.

If you haven't seen this video of bakers at Williamsburg's Bagel Store creating their famous rainbow bagels, watch it immediately. It will get you so blissed out. Dubbed "The World's Most Beautiful Bagel," this treat has an insane number of neon layers. Plus, it's served with Funfetti schmear. Like, duh, yes, please.

Moe's Doughs, another New York staple (sorry, non-East-Coasters — I live in the Midwest, so I share your pain), creates their famous rainbow doughnuts by combining Red Velvet, Sour Cream, Strawberry, and Pistachio cake batters. Of course I'm not at all interested or impressed; why do you ask? (Actually I am. I really, really am.)

Home of the Original Rainbow Cone, Rainbow Cone (yes, I know, that was confusing) in Chicago creates a five-layer ice cream experience that's been popular since 1926. Beginning from the bottom, you get Chocolate, Strawberry, Palmer House (which is "New York Vanilla" with cherries and walnuts), Pistachio and Orange Sherbet.

This one you can make at home! Because a lot of us don't live in major cities! And while I don't need an incentive to eat more carbs, a bowl of rainbow spaghetti is too tempting to pass up! You should check out the full article about how to make rainbow spaghetti on Tablespoon, but the basic gist of it is to cook a batch of spaghetti, then drain it and rinse it immediately in cold water. Divide it into four sections (or more if you want more colors), and put each section in a baggy with several drops of food coloring. Shake it out, get a groove going, and TA-DA! Rainbows.