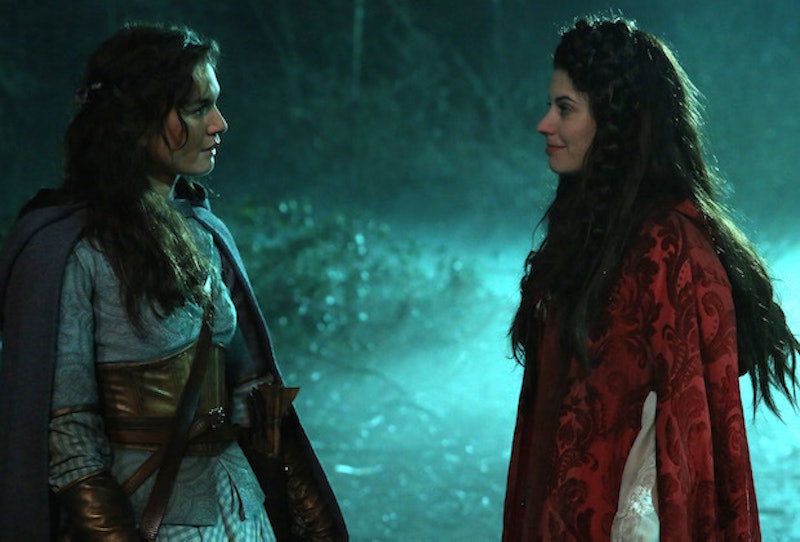 For months now, we've been promised a Very Special episode of OUAT — one in which an LGBT Once Upon A Time couple would finally be introduced, a whole five seasons into the show. Prior to the big reveal, showrunners Adam Horowitz and Edward Kitsis were adamant in an interview with Entertainment Weekly that whoever this pairing was, it really was No Big Deal. "Our goal is to make it as we see it in the real world, just as normal and as a part of every day life as it should be," Horowitz told the magazine. "[We wanted to] tell a story of love no different than Snow and Charming or Hook and Emma," Kitsis added in the EW interview. Of course, after watching Sunday night's episode, "Ruby Slippers" with Ruby and Dorothy's big kiss, I was left disappointed at how quickly everything occurred, and how easy it will be to leave this relationship behind. Bustle reached out to ABC who provided this statement: "True love's kiss has been a staple of this show since the beginning. This past Sunday's episode was just another example of how in a fairy tale, as in life, love is love."

It's not that I'm not happy for Ruby and Dorothy. They're cute together or whatever, as much as any couple who literally just met at the beginning of the episode and don't actually know much about each other at all can be — but I'd be lying if I didn't say I was left feeling underwhelmed at best and cheated at worst. OUAT did indeed follow through on its promise to portray an LGBT romance, but it left a bad taste in my mouth. For one, since the characters are sealed away in Oz, we likely won't be seeing them much more after watching them go from their first meeting to a True Love's Kiss in the span of a single 40 minute episode.

The most beloved pop culture couples are such because the audience gets to watch them fall in love, to see their connection forge, connect, and solidify over long periods of time — or for God's sake, at least longer than one episode. While we've watched couples like Snowing and Captain Swan get multi-episode or multi-season romantic arcs, this couple was relegated to a single episode, and that's pretty unfortunate.

This is one of the reasons many queer fans so fervently 'ship Swan Queen. Emma and Regina make sense; in fact, they make more sense than pretty much any other couple on the show right now — a realization that probably hasn't escaped the powers that be, but is likely a bit too terrifying to do anything about. After all, having the two female leads — who, by the way, already co-parent a son, sacrifice their eternal souls for each other, and literally create unstoppable magic together — become a canon couple might be too much for the homophobic portion of the audience to handle. (Some people literally petitioned the creators to not include an LGBT romance for fear of showing children that type of relationship is acceptable.) So, I'm smart enough to know that Swan Queen is likely never going to happen. But, that doesn't mean I want a consolation prize in the form of two characters who aren't involved in the main storyline and who'll likely never be seen again.

Ruby and Dorothy may will live happily ever after in Oz, but at the end of the day, is it really enough? Representation doesn't mean throwing the audience a bone in the form of a throwaway romance that we saw for a few minutes and then never have to deal with again. In fact, that's actually the definition of tokenism, and not only undermines the message they were (presumably) trying to send about acceptance, visibility, and the universality of love, but undermines the series as a whole. I feel like, after that, OUAT shows itself to be untrustworthy when it comes to telling stories that deviate from the status quo. Considering what great promise OUAT showed in its early seasons, this is sad, but not at all surprising.

OUAT creators might defend themselves by saying that they didn't have to go there at all — that they included an LGBT couple because it reflects the world we live in — and while that's true, it did't need to be done so half-heartedly. Yes, LGBT couples are part of the world, but unlike the Ruby Slippers pairing, we don't exist to prove a point. Our relationships are complicated, passionate, and hard-wrought, just like any others. We can't be condensed to an hour long totally-regular-nothing-to-see-here dose of lip service, and if only OUAT writers understood this, we might have ended up with a very different show.