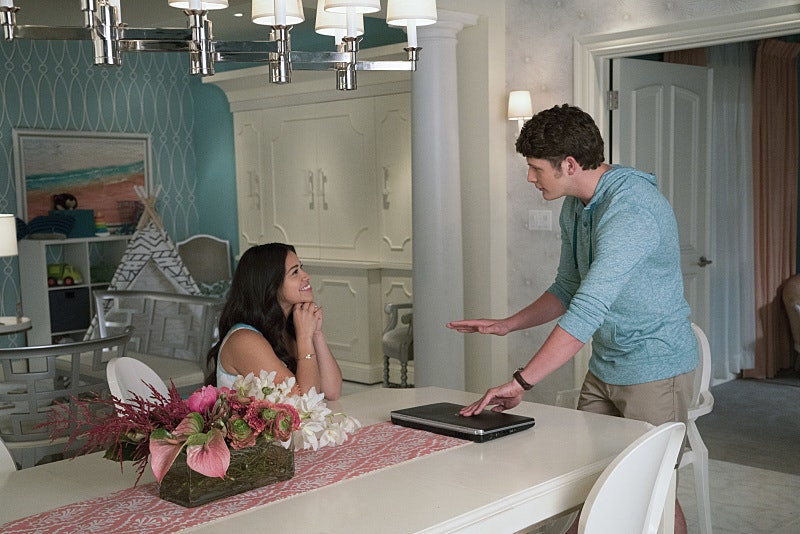 Is anyone else starting to get really concerned that Jane and Michael's wedding is never going to happen? I say this not because I don't think they belong together (because they totally do), but rather due to the fact that Michael seems to be in danger on Jane the Virgin . At the end of Monday night's episode, Jane and Michael were getting into a vehicle to go home and celebrate her big grad school news when a mystery man in a camera were taking pictures of them the entire time — all of them focused on Michael. So who is stalking Michael on Jane the Virgin and what do they want with him? That, unfortunately, remains to be seen, but I think we can all agree that it's definitely not going to lead to anything good.

Odds are this probably has something to do with Rafael's mother, Elena (aka Mutter) or his brother Derek, both of whom Michael has been deeply investigating. Perhaps they've hired someone to keep close tabs on him to make sure he doesn't get too close to whatever operation they're running. Or maybe the writers know that viewers will think that and are using them as a red herring to what's really going on.

The way I see it is, either this stalker guy with the camera is a man for hire and just doing what someone else is paying him to do, or this is actually the person who's after Michael. Either way, all signs point to danger for Michael and if he's not careful he might not be waiting for Jane at the end of the aisle on their wedding day. After all, I doubt innocent photography is going to be the extend of this guy's job assignment. (Is it too early to start panicking? Because I've already started panicking.) So, in other words, watch your back, Michael!