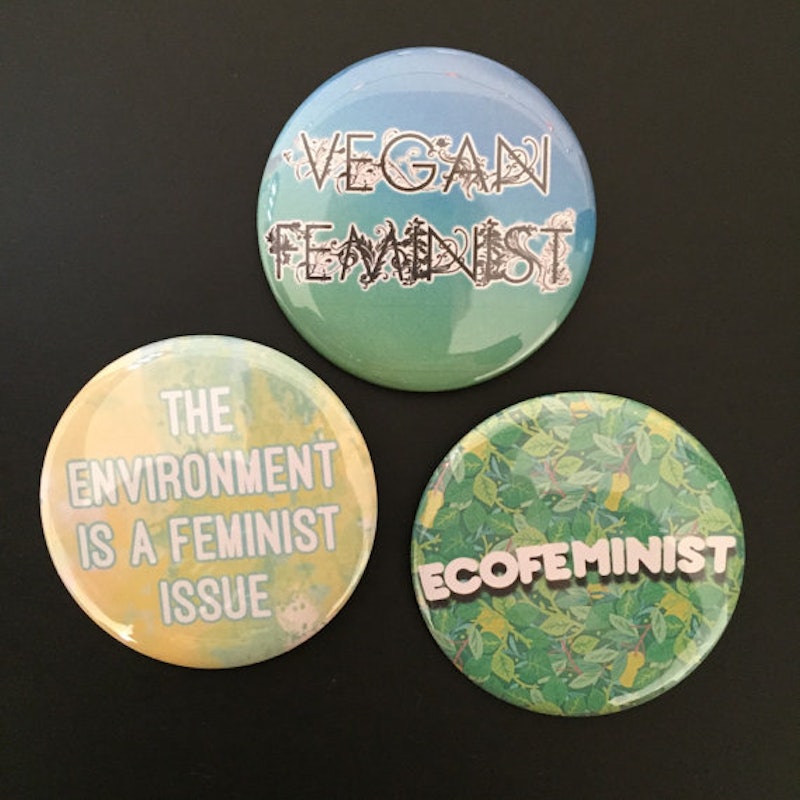 When it comes to environmental damage and the health of our natural resources, gender definitely plays a role: in who's affected, who can do what, and how we can move forward. The United Nations Environment Program puts it pretty succinctly, saying: "Around the world, environmental conditions impact the lives of women and men in different ways as a result of existing inequalities. Gender roles often create differences in the ways men and women act in relation to the environment, and in the ways men and women are enabled or prevented from acting as agents of environmental change." When it comes to putting a gendered lens on climate change and environmental issues, there's one particular school of thought that prioritizes women: the concept of ecofeminism. The name implies the basic idea, but what exactly is ecofeminism?

Emerging in the 1970s, alongside the anti-nuclear proliferation movement and the beginnings of green political activism, the concept of ecofeminism relates environmental damage to women's exploitation and lack of empowerment. To quote Professor Mary Mellor, a UK academic, "ecofeminism is a movement that sees a connection between the exploitation and degradation of the natural world and the subordination and oppression of women... Ecofeminism brings together elements of the feminist and green movements, while at the same time offering a challenge to both." But it's not as simple as just women going out to fight for ecological issues. (Although we're very good at that.)

When it comes to actually defining ecofeminism, there's an issue: it's not actually one movement. Instead, it's more like a group of concepts and thoughts that emerged as part of a cultural movement in the 1970s, or what Dr. Richard Twine calls "differing accounts that wove together a perceived interconnection between the domination of women and nature." As we'll discover, there are some aspects of ecofeminism where people radically disagree. Some attitudes are widespread, but this is going to get complicated.

This will only be the most basic of primers; I can't summarize decades of complicated academic argument into one article (I wish). If you're interested in ecofeminism, and want to get into the theory and see the real complexity of it, do also read longer resources that give you more detail.

Ecofeminism Sees A Parallel Between The Earth & Women

Basically, ecofeminism sees a relationship between the serious environmental damage done to the earth and the repression of women. But that one relationship can take many forms, depending on what kind of ecofeminist you are.

One form of ecofeminism takes it very literally, saying that women are viewed in the same way as natural resources: as something to be taken, plundered, or used. Activist Ynestra King has stated, "We see the devastation of the earth and her beings by the corporate warriors, and the threat of nuclear annihilation by the military warriors, as feminist concerns. It is the masculinist mentality which would deny us our right to our own bodies and our own sexuality, and which depends on multiple systems of dominance and state power to have its way." This is the perspective of radical ecofeminism: that women and the environment are exploited in the same way by the same patriarchal dominating forces, who are seen as creating order and deriving value from "chaotic" things (like women and forests). Some radical ecofeminists also take the same position about animal welfare, saying animals are being unfairly exploited by current power structures in a way that harms the environment, too.

But there's another perspective: Cultural ecofeminism makes out the link between nature and women to be empowering, picturing our gender as uniquely connected to the environment and natural processes through things like menstruation and childbirth. This perspective posits that when it comes to feeling the real damage of environmental harm and doing something about it, we're better-placed to take action. Basically, the academic Leigh Brammer summed it up this way: "some ecofeminists view the link between woman and nature as empowering, others believe it's imposed by patriarchy and is degrading." The first belief is cultural ecofeminism, the second is radical ecofeminism.

One of the big aims of ecofeminism is to change the world's way of relating to things like women and the environment: instead of domination and power hierarchies, they want to install equality and communities that interact on a level playing field. Two of the most famous ecofeminists, Maria Mies and Vandana Shiva, declared in their introduction to the book Ecofeminism in 1993,

"Our aim is to go beyond this narrow perspective [patriarchy and hierarchies] and to express our diversity and, in different ways, address the inherent inequalities in world structures which permit the North to dominate the South, men to dominate women, and the frenetic plunder of ever more resources for ever more unequally distributed economic gain to dominate nature."

Radical ecofeminism talks about this in particular; depicting women as natural and irrational, they say, created a hierarchy where men needed to come in and control and develop them, just as they do to nature.

Beyond the theoretical stuff, much ecofeminism points to the very real interactions that women, particularly in developing countries, have with environment degradation, and how their disempowerment is related to serious ecological problems. For instance, women are often the gatherers of food and water (what's called "natural resource managers") for their households, which means that their lives are pretty heavily intertwined with a healthy, flourishing landscape. Sara Alcid at Everyday Feminism points out, for instance, that young girls who have to work with their mothers to find scarce water are less likely to be able to go to school, and that low-income women of color are disproportionately exposed to toxic chemicals in the workplace. Women are both invested in preventing environmental damage and very vulnerable to it.

Writer Leigh Grammar points out that this vulnerability is a patriarchal thing: "Women are hurt most by the exploitation of the earth because they are the most vulnerable in patriarchal society. The main focus is on women who are more at risk because they suffer double oppression of poverty, race, education, or nation." And it goes further than just disempowerment and cycles of poverty — women in their capacity as natural resource managers might have unique perspectives on how to help stop environmental damage, but if their voices are silenced, they can't help.

Aside from the problem of not being a coherent ideology, cultural ecofeminism in particular is often criticized for its tie between women and nature, as Yale University's "Ecofeminism: An Overview" explains. Isn't this just more gender stereotyping? As Dr. Catherine Roach, author of Mother/Nature, points out, it's hardly as if men aren't natural beings: "they do share all other human biological processes (eating, sleeping, eliminating wastes, getting sick, dying), and in addition, in their ejaculation of semen they have experience of a tangible stuff of the reproduction of life." For some commentators, like Anne Archambault, the idea that women are somehow more "natural" is nonsense and actually hamstrings the whole idea. "The claim that women are biologically closer to nature," she says, "reinforces the patriarchal ideology of domination and limits ecofeminism's effectiveness". Ecofeminists of the radical strain don't believe this either, causing conflict within the movement.

(There's also a bit of a cultural issue, too. For instance, Dr. Twine points out that Chinese society doesn't have the same "women equal nature" idea, even though it has similar issues about female inferiority; he cites the Chinese academic Huey-li Li, who says, "The association of women and nature is not a cross-cultural phenomenon, since nature as a whole is not identified with women in Chinese culture".)

People are worried about radical ecofeminism, too. One of the more popular critiques of ecofeminism, over at Green Fuse, makes the argument that it seems to clash with conventional feminism these days, which wants to put women into positions of power (Hilary 2016!) and give them a chance to be part of the hierarchy. Radical ecofeminism wants to eliminate those structures and replace them with communal decision-making and equal valuing of all people, and it's worried that it's not a realistic point of view.

Whatever your interpretation, ecofeminism is a unique feminist lens on the very real relationship between gender and environmental issues. Damage to the environment is definitely a feminist issue; it desperately needs the involvement of empowered, educated women to succeed in protecting communities and stopping further serious degradation.

More like this
Beyoncé & Madonna’s “Break My Soul” Remix Honors A Group Of Black Icons
By Stephanie Topacio Long
Charlene White & MPs Lead Tributes For Bristol Bus Boycott Organiser Roy Hackett
By Sam Ramsden
22 Movies On Netflix That Are Perfect For The Whole Family
By Bustle Editors
Your Daily Horoscope For August 15, 2022
By Mecca Woods
Get Even More From Bustle — Sign Up For The Newsletter