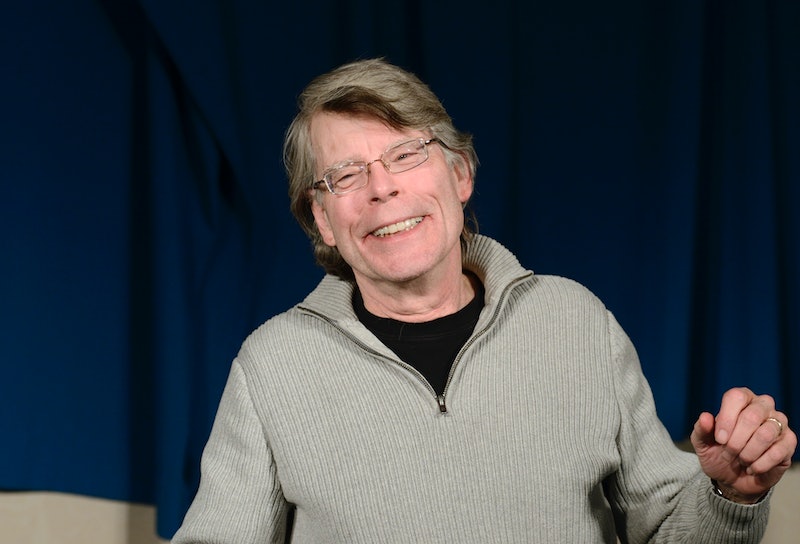 Every aspiring writer gets discouraged now and again, so it can never hurt to bookmark a few inspiring lines in anticipation of your next bout of writer's block. For his fans, I've got 19 Stephen King quotes for writers in need of a pick-me-up.

King fans who have read On Writing will recognize many, if not most, of these quotes for writers. However, because the End of Watch author uses the Most Writers Are Writers trope a lot, there's plenty of great writing inspiration to be found in his novels, as well.

Over the last several decades, King has amassed enough writing wisdom to pat even the most despondent wordsmith on the back. He's been writing for longer than most Bustle readers — myself included — have been alive, for one thing. And, with more than 50 novels published since he hit bestseller lists with Carrie in 1974, he's quite a prolific author. So, really, can you think of anyone else you'd rather listen to about the process?

Whether you need a friendly reminder to read more, or just want some words of wisdom to keep yourself dedicated to your writing craft, these Stephen King quotes for writers will hit the spot.

1. "Books are a uniquely portable magic."

2. "No one ever does live happily ever after, but we leave the children to find that out for themselves."

— Roland Deschain, Wolves of the Calla

3. "Fiction is the truth inside the lie."

4. "Amateurs sit and wait for inspiration, the rest of us just get up and go to work."

6. "Talent is a wonderful thing, but it won't carry a quitter."

7. "The road to hell is paved with adverbs."

10. "If it's ka it'll come like a wind, and your plans will stand before it no more than a barn before a cyclone."

12. "Writers remember everything ... especially the hurts. Strip a writer to the buff, point to the scars, and he'll tell you the story of each small one. From the big ones you get novels. A little talent is a nice thing to have if you want to be a writer, but the only real requirement is the ability to remember the story of every scar.

Art consists of the persistence of memory."

14. "Let's get one thing clear right now, shall we? There is no Idea Dump, no Story Central, no Island of the Buried Bestsellers; good story ideas seem to come quite literally from nowhere, sailing at you right out of the empty sky: two previously unrelated ideas come together and make something new under the sun. Your job isn't to find these ideas but to recognize them when they show up."

16. "The more you read, the less apt you are to make a fool of yourself with your pen or word processor."

17. "Writing is a lonely job. Having someone who believes in you makes a lot if difference. They don't have to makes speeches. Just believing is usually enough."

18. "There are also books full of great writing that don't have very good stories. Read sometimes for the story, Bobby. Don't be like the book-snobs who won't do that. Read sometimes for the words — the language. Don't be like the play-it-safers that won't do that. But when you find a book that has both a good story and good words, treasure that book."

19. "Now comes the big question: What are you going to write about? And the equally big answer: Anything you damn well want."