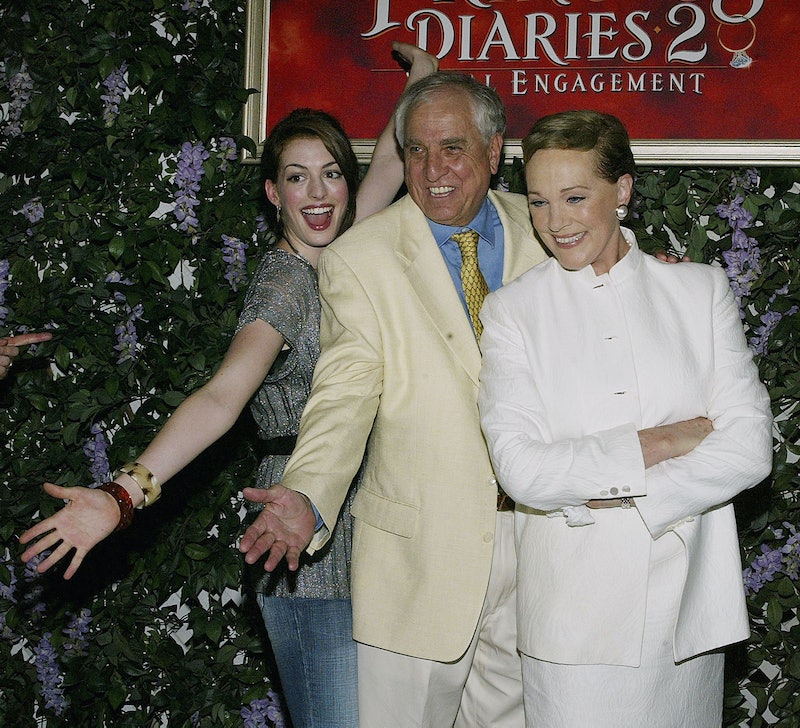 Holy Fat Louie the cat, this is an exciting update: In a recent interview with E! News, Princess Diaries director Garry Marshall said he and Disney "are talking" about making Princess Diaries 3. Though the studio has yet to release a formal bulletin regarding PD3, Marshall told E! News that the ball is not not rolling. Yes, Amelia Mignonette Thermopolis Renaldi and company may be back on the big screen before we know it.

Princess Diaries 3 would be the third movie (duh) in the franchise based on Meg Cabot's young adult novel series about a high school student who learns she is the heir to the throne of the fictional country Genovia. Back in March, Marshall not only confirmed that he intended to stand at the helm of the followup to 2004’s The Princess Diaries 2: Royal Engagement, but also revealed that franchise star Anne Hathaway was on board. Here is what the director told E! News while promoting his new movie Mother's Day:

Well, you know, Disney is quite powerful, and they say they would like to announce it— not me — but we are talking.

Oh, is that so? To quote Monty Python, "Nudge, nudge. Wink, wink. Say no more." The silver and small screen icon continued:

And Anne Hathaway has a baby now … and has a wonderful husband, Adam. And, you know, people change. There’s a passage. It goes, "Hello! Oh, I’m discovered in this movie!" If it’s a comedy, they say, "Alright, enough of that. I want to be an O.D. on drugs in a movie, I want to be naked." And they go through that period. And then, they have a child, and they come back to me and say, "I’d like to make something my child could see." And I’m very good at making things your child see, and the whole family.

2001's Princess Diaries was Hathaway’s first feature film, and both it and its sequel helped propel the future Oscar winner to the A list. And I may or may not watch both PD movies every time they're on the Disney Channel.

What can I say? That Anne Hathaway sure is a charmer!