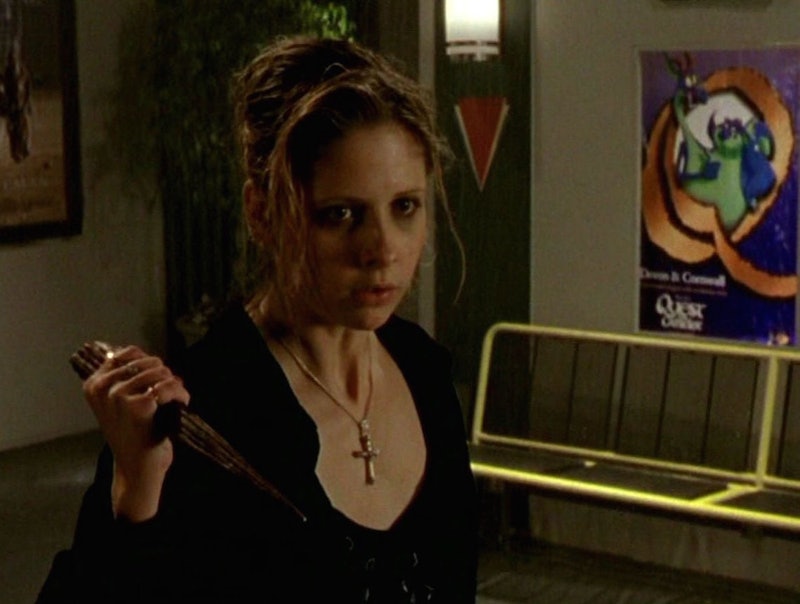 True facts: One of the most relatable television shows in the '90s was, hands down, Buffy the Vampire Slayer . Not only was it innovative and full of girl power goodness, but, the magic of the show was also that many of the supernatural goings on were total metaphors for real issues teens deal with. From things like Buffy having sex with her boyfriend for the first time and experiencing him literally changing into an evil monster — a metaphor for a significant other ghosting, or changing after an experience like that — to things less intense, like girls competing for the cheer squad being so serious about making the team they actually harm each other, the show really had its finger on the pulse of teen issues even with its supernatural plots. Even the concept of the one hang spot where everybody goes to unwind when they are underage was on point (the evil monsters were added for dramatic effect, I'm sure). Buffy encompassed it all.

Even though the show often followed a monster-of-week format and did have a huge focus on the supernatural, the issues of the average teenager — nay, human — were also addressed. That's why even though when you know there is distracting evil afoot, there was also a good ol' fashioned love drought for everyone to identify with, or something equally banal.

Here are the 11 times Buffy the Vampire Slayer was the most relatable show on '90s television.

1. When The Cheerleading Tryouts Got Witchy

The promise of popularity made some people go crazy about being accepted on a team. They didn't care what friendships they had to throw away for a chance at the gold. Of course, IRL, it didn't get as serious as voodoo. (I hope.)

2. When Everybody Hung Out At The Bronze

It seems like most towns have a place where all the under-agers go to let off some steam. When Buffy and friends continued going to the same spot after they turned 21, it made them seem even more common. So many people from small towns stay in the same small towns their whole lives and continue going to these big spaces.

3. When Holidays Never Go As Well As Planned

Every single one of Buffy's birthdays was a disaster, Halloween always ended up with some tomfoolery, even Thanksgiving and Christmas weren't safe from perilous magic. This is also pretty relatable because who among you hasn't been super excited about a holiday only to have it ruined by a drunken relative or parking ticket?

Buffy can murder centuries-year-old beings, is a high school graduate, and has one of the most badass attitudes of any teenager for miles around, and yet she has an extreme mental roadblock against driving. As we are all flawed people who sometimes make things harder for ourselves than they need to be, it helps that these pals also share the same issues.

While the struggles Buff faced with her boys were slightly more heightened than most of ours — for starters, everyone I've ever dated has still been alive — they were also very relatable. The boyfriend who turns "bad" as soon as his partner has sex with him, the emotionally abusive boyfriend, the boring one — these are relationships many of us have also experienced.

7. The References Were Always On Point

The Scoobies had a knack for making pop culture references that still resonate today. Sure, some of them fall a little flat now (remember Buffy responding "he needs to call me," to Cordelia's mention of James Spader?) but there are some that are timeless. Like, anytime Xander mentions Garfield.

For once, it was a death or injury of someone we loved that wasn't caused by some sort of goblin or ghoul — and it was something that Buffy couldn't do anything about. It was heart-wrenching and so relatable to watch the Scoobies deal with the death of someone who they were all so close with. When Willow starts to break down because she can't find anything to wear to Joyce's funeral, personally, I almost lost it.

9. When Anyone Tried To Act More Badass Than They Were

Sure, there were some strong characters, but at the same time, everyone seemed to be putting on a braver front to seem cooler (like the Scoobies through most of high school), or like a normal human with a shred of tact (Anya). There's a lot of pretending in Buffy, and in real life.

10. When Xander Had To Get All Sorts Of Jobs

After they graduated high school, Xander went straight into different industries, and it seemed like he was getting jobs everywhere. Whether it was a summer job in high school or college, or a current job to keep afloat, many of us have had the most random of jobs, just like Xander.

11. When Willow Had Some Substance Abuse Issues

Sure, her substance was magic, but she was so addicted she was willing to lie to her friends and family — that's having a problem. Think about it: it's so common to get hooked on something, whether it be alcohol, or marijuana, or even simple addictive behaviors like over-watching television because it gives some small pleasure. Even if you are not "addicted," an understanding of the addiction is important, and Buffy stressed that.

See? Not only was Buffy a great show, but it was also one of the most relatable. Even when the issues were not the sort that directly affected us, they beared an eerie similarity to real life.