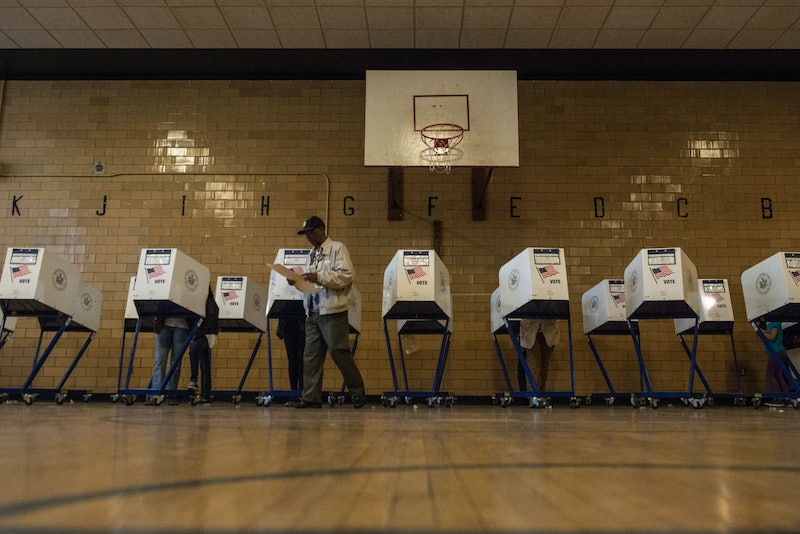 Although it was a good night for frontrunners Donald Trump and Hillary Clinton, Tuesday's New York primaries didn't quite go as planned for potentially hundreds of thousands of voters. Throughout the day, voters complained of long lines, broken polling machines, and other alleged barriers to casting a ballot. In fact, a reported 126,000 voters in New York City alone might have been mistakenly removed from voter rolls, preventing them from casting their votes. As a result of the various complaints, the city's comptroller will audit the Board of Elections to investigate any wrongdoing. Board of Elections Executive Director Michael Ryan confirmed voters had been removed (for a reason), and told CNN, "We're not finding that there were issues throughout the city that are any different than what we experience in other elections."

New York's complex voter registration laws came under fire ahead of Tuesday's Republican and Democratic primaries. According to the state law, primaries in New York are closed, meaning that voters must be registered with either the Republican or Democratic party in order to participate in their respective party's primary. Closed primaries are not uncommon, but they are often considered problematic because they neglect Independent voters who don't identify with either of the two largest political parties in mainstream politics. In New York, it wasn't just the closed nature of the primaries that was criticized, but also the deadline for registration. Voters had to be registered for the primaries by late March, but they had to be registered with a political party back in October, some nine months before Tuesday's elections.

On Tuesday, Comptroller Scott Stringer sent a formal letter to the executive director of the New York City Board of Elections, asking for responses to several complaints of voting irregularities throughout the Big Apple, particularly in Brooklyn. In the letter, Stringer mentioned allegations of polling places that opened late, election dates that were inaccurately communicated, and poll workers who were insufficiently trained. But he himself raised the number that people are concerned about:

Of particular concern are numerous allegations of widespread removal of eligible voters from voter-registration rolls, as well as instances of incorrect party affiliations on individual registration records. ... Indeed, voter enrollment data shows that the number of eligible Democratic voters in Brooklyn precipitously dropped by more than 120,000 between November 2015 and April 2016, without any adequate explanation furnished by the Board of Elections.

The controversial October registration deadline could explain why many voters were turned away from the polls on Tuesday, but it doesn't explain the reasoning if more than 120,000 previously registered voters were actually removed from the voter rolls — that's where the Board of Elections' response comes in. According to Ryan, the board's executive director, the 126,000 voters cited by Stringer and media reports were removed for various reasons. According to what he told CNN, 12,000 moved out of the Brooklyn borough, 44,000 were marked inactive because letters sent to their home were returned to sender, and 70,000 were inactive because they did not vote in two federal elections and did not respond to cancellation notices.

There's no doubt that large amounts of voters were frustrated with Tuesday's election process in the state of New York. USA Today even reported that the state attorney general's office received four times as many complaints on Tuesday than in the 2012 election cycle. In New York City, officials have responded quickly, likely hoping to minimize voter concern for the approaching general election in November.