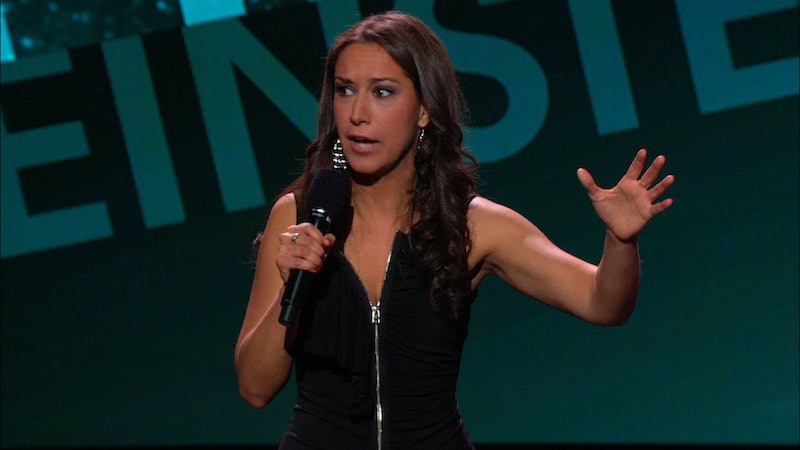 Amy Schumer has made amazing strides for women in comedy and now she's helping a fellow comedian and good friend, Rachel Feinstein, get exposure on Comedy Central with a one-hour stand-up special appropriately titled Amy Schumer Presents Rachel Feinstein. If she looks familiar, it's because Feinstein has appeared in numerous Inside Amy Schumer sketches, the film Trainwreck, and on Schumer's Instagram feed — so these two are definitely #FriendshipGoals, both onscreen and off. Although Schumer makes a brief appearance in Feinstein's dressing room at the beginning of the special, she quickly steps aside in order for her friend to have the spotlight. During the hourlong special, Rachel Feinstein's social media jokes were definitely the highlight because they were both hilarious and painfully accurate.

"I don't think people understand Facebook," Feinstein observes, "they think it's like a god that you tell your darkest secrets to every hour." She then explains her nightly social media routine — she screenshots the ridiculous things people say on Facebook, sends them to her friends, and then goes to bed after her judging is complete. I'm fairly certain that she's exaggerating and this isn't a daily occurrence, but it's definitely a fitting commentary of social media at its worst — because spending time judging other people for what they post is just as unproductive and unhealthy as updating your status every hour.

After inexplicably becoming friends with her accountant on Facebook, Feinstein is worried that he's in a really dark place right now — specifically, he's never felt "so alone and furious in his entire life" and she's understandably concerned that he may not be able to handle her 2015 tax returns. But, then all is well several hours later when he posts a picture of pasta and Feinstein can rest assured that he has thankfully stabilized. We all know the type, but I'm sure it's unnerving when the posts come from the guy handling your finances.

Then, there are the types who are eager to bestow their wisdom upon us — or, as Feinstein puts it, "gift their brilliance to the peasants." For example, one of her Facebook friends recently wrote that "we need to end genocide once and for all." (I have some strange social media connections, but Feinstein wins the prize for the most eclectic bunch — I really hope artistic license allows her to exaggerate here). She quips that the "controversial stance on genocide" post changed her life: "I was staunchly pro-genocide before I read your shattering Facebook exposé." I'm sure Schumer will be proud that her protégé has seen the light.

And, while others have been clamoring for "dislike" and "love" buttons for basically as long as I can remember, Feinstein thinks another option should be added — "I now think you're unstable." (If Mark Zuckerberg happens to be watching, perhaps he will consider Feinstein's advice.) Although all these jokes had me in stitches, they're also painfully accurate — Feinstein admits she reads and follows posts (and the comments below them) that she finds ridiculous because she just can't help herself.

Although Feinstein's jokes may be an exaggeration, I think many of us are guilty of letting social media bring out the worst in us — and she raises a point that isn't discussed enough. There's plenty of talk about how social media can make us insecure because people put forth a carefully constructed image of themselves and we compare our worst days to our Facebook friends' best days. But, let's be brutally honest with ourselves — sometimes, social media does the opposite and brings out our judgmental sides. From behind a computer screen, it's easy to mock someone we haven't seen in forever because we disagree with their political views, we think they post too many selfies, or we just cannot believe that they're sharing so much personal information with the world. And, really, this behavior is worse than posting a few too many personal thoughts.

Feinstein's social media commentary struck the perfect balance between poking fun at the undeniably ridiculous things that pop up on Facebook and pointing out that, if we follow along simply to mock, that's pretty uncool, too.