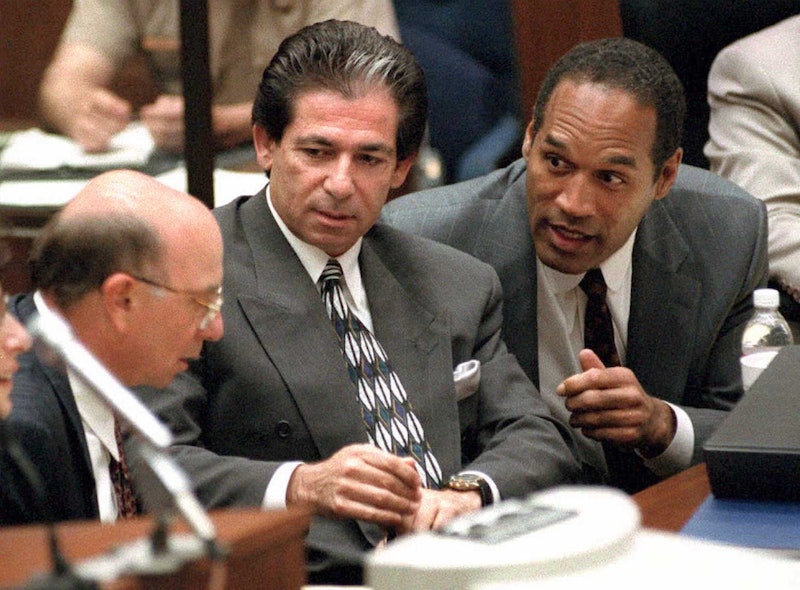 At the time of O.J. Simpson's acquittal, polls revealed that a majority of Americans thought he was guilty — a detail not made abundantly clear in The People v. O.J. Simpson: American Crime Story. It's true that the public was split on the issue, largely based on race, as the show portrayed. But the vast majority of Americans thought Simpson was guilty, and according to polls, that number has risen in the years since the verdict. But there have always been holdouts. Some Americans are convinced that he didn't do it, and these O.J. Simpson conspiracy theories could explain why.

As recently as 2004, 16 percent of Americans thought it was "definitely not true" or "probably not true" that Simpson killed his ex-wife Nicole Brown Simpson and her friend Ronald Goldman. If so, they must have some other explanation. Led by Johnnie Cochran, the defense threw out a number of possibilities in court, including the notorious LAPD theory: That the cops, led by officer Mark Fuhrman, had planted the evidence to convict Simpson (Furhman vehemently denies this to this day). Combine that with the glove try-on — "If it it didn't fit, you must acquit!" — and Cochran won the trial.

But there are other theories to this day, in spite of denials from all involved.

The "His Son Did It" Theory

Private investigator William C. Dear released a book in 2012 about his purported 18-year investigation into Nicole and Ron Goldman's murders. His conclusion? O.J.'s son Jason might have done it. Jason was 24 at the time — the oldest son from Simpson's first marriage. In Dear's version, O.J. was at the scene, but only to protect his son from arrest. Most disregard this theory, though, because Jason had an alibi: He was working that night at a restaurant. Jason himself has denied the claims.

The "Drug Dealers Did It" Theory

This one came from Cochran himself, and was supported by much of the defense team. As shown in the FX show, during the trial, he suggested that Nicole owed money to drug lords who were looking for her friend Faye Resnick. Resnick addressed this theory in her bestseller Nicole Brown Simpson: The Private Diary of a Life Interrupted, denying all such allegations. Cochran may or may not have been trying to confuse the jury, but there are members of the public who are still convinced.

Serial killer Glen Rogers has claimed that he did it. After he was arrested in 1995, he said that he had killed 70 women, and his brother said that Nicole was one of them. Rogers' brother shared the claims in an Investigation Discovery documentary, and Rogers' family even claimed that O.J. paid him to do it (which Simpson has adamantly denied). Since then, Simpson's manager has claimed he received a letter from Rogers admitting to the crime.

Rogers was convicted of two murders and is suspected of several more — but probably not as many as 70. He began his killing spree in 1995, about a year after Nicole was murdered. He allegedly met her while working on her house in 1994 and partied with her, but the police weren't buying it. "The LAPD is quite confident that we know who killed Nicole Brown Simpson and Ron Goldman. We have no reason to believe that Mr. Rogers was involved," spokesman Commander Andrew Smith told CNN when the claim first surfaced.

The "Mind Control, Of Course" Theory

Some contend a group of the Illuminati (a secret society that rules the world) were involved, and that O.J. was subject to mind control experiments. The theory's fans contend that the Illuminati were hoping to ignite a race war in the U.S. As they put it: "O.J. Simpson was a CIA mind-controlled slave, and the entire Simpson case was concocted as an elaborate effort to cause racial tensions." Evidently the CIA and the mob and the Illuminati were all in cahoots. Doesn't make sense to you? That's probably why the conspiracy theorists like it.

Don't think any of these hold water? Don't worry; you're in the majority.

More like this
All The Theories About Kathleen Peterson’s Death
By Morgan Leigh Davies
9 Honestly Unbelievable Revelations From The WAGatha Christie Trial
By Frances Stewart
UK Viewers Will Have To Wait To See Jessica Biel’s Killer Housewife Series
By Rachel Mantock
Don Crowder Successfully Defended Candy Montgomery, But His Story Ended In Tragedy
By Gretchen Smail
Get Even More From Bustle — Sign Up For The Newsletter