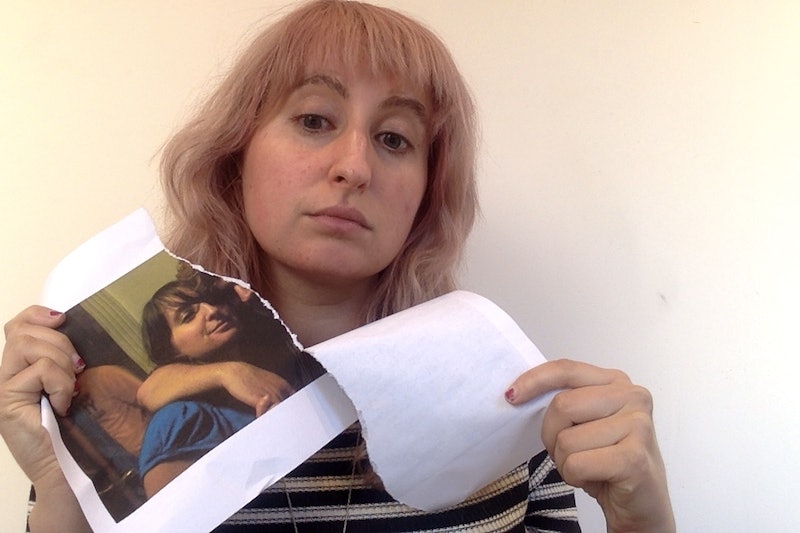 There was a time in my life when I thought it was very, very important to stay friends with all of my exes. This was the same period in my life when I thought that all my personal/professional/philosophical problems could be solved by purchasing a pair of jeans I had seen on Gossip Girl, which gives you a taste of my ability to engage in high-quality decision-making at the time. However, unlike my secret belief in the spiritually redemptive power of $300 pants, my belief that there was an inherent good in staying friendly with everyone I had ever had an adult sleepover with seemed to be echoed by society.

We often hear that staying friends is the mature thing to do, that it shows that your relationship was about more than sex and mutual emotional desperation. Befriending an ex allegedly proves that you value your ex as a human being. Well-adjusted people can supposedly help their exes move or invite them to their wedding or bris or whatever with no weird feelings; sometimes, befriending an ex even helps people drop any lingering bad feelings and move on. Hey, Justin and Selena are cool with each other, so why can't you and your ex be, too?

In my ex-friending days, I liked to tell people that I was proud of my ability to stay friends with my exes, that they brought a lot into my life, that I didn't have any ulterior motive, and that my existence was richer for staying in touch with them.

I was wrong. On pretty much every level. And I'm happy that I don't talk with them today.

On the surface, staying friends with an ex seems like a no-brainer — you liked this person enough to regularly kiss them, have dinner with them, or touch their party parts; surely that means you also like them enough to text them once every six months to make casual brunch plans that both of you flake out on (the cornerstone of modern friendship), right?

Right... but there are more factors at work, like how you broke up, and even what kind of couple you were when you were happy. Studies show that couples who broke up due to a lack of chemistry are more likely to have successful friendships that couples who broke up because, say, the dude moved in with another woman while you were in Florida visiting your sick grandfather (ahem, BRETT) — a fact which shouldn't have been a bombshell, but which shocked me. It had never occurred to me that relationships that had once been healthy were likely the only ones worth converting into platonic friendships — and that relationships that had been pretty toxic and manipulative the entire time probably wouldn't magically convert into healthy, mutually supportive friendships, just because you two stopped grinding genitals.

Plus, even if things didn't end with tears, screaming, and the destruction of some wholly innocent nacho serving platters, jumping too fast from romantic relationship to attempted friendship can turn your attempts at platonic interaction into a garbled mess. As licensed psychologist Dr. Erika Martinez told Bustle, "Generally speaking, staying friends with an ex after a breakup can really blur the line that denotes the 'end.' It's important to emotionally digest the end of a relationship — what happened, each person's role, etc. — and that can be difficult to do without a clear 'end.' Without a clear end, it's also really easy to get stuck in some unhealthy behaviors (e.g. still having sex with your ex)." So it shouldn't be a surprise that post-breakup friendships can, when entered into too quickly or without careful forethought, basically replicate all the problems of your old relationship.

In the decade-plus that I was on the dating market, I was, for the most part, hellbent on staying friends. That "for the most part" is worth noting here — because I was only interested in staying friends with guys who had dumped me. This policy didn't cramp my style too much, as I was generally the dumpee — I was the person in a relationship who hung on way past the point where anything was fun, and basically forced the guys who dated me to get really creative when figuring out how to break up with me.

My desire to stay friends with my exes stemmed from two competing feelings: The first, more emotionally pure feeling was that I enjoyed these guys' company, and was saddened by the idea of never again goofing on an '80s movie or eating some poutine with them again. We had been lovers (ew), but we had also been buddies who had in-jokes about the time we saw a stray cat steal someone's wallet. I didn't want to let that go.

But when I decided to send that first post-breakup text, that feeling took a backseat to a much uglier, messier feeling: I was insecure. Few of these relationships had been passionate romances; most of them were so-so, and ran primarily on the fuel of my desperation and desire to never be alone. After we broke up, I'd think that if I managed to get these guys to spend time around me in a situation that was lower pressure than a date, they'd realize how much they liked me. They'd come back, and I wouldn't have to feel so worthless anymore.

This strategy both worked and didn't work: My exes and I would usually get back into a groove of hanging out (particularly easy in my social circle at the time, where most couples met through mutual friends — no one wanted to be the couple whose sh*tty breakup ruined the Golden Globes party for everyone else this year). But in the back of my mind, I was just biding my time until we got back together.

And we did typically get back together, in the sense that our genitals started spending quality time together again. When you're at a party and having a fun time casually hanging out with a person who already knows what you look for in a hand job, the odds are fairly high that you two will end up in bed eventually.

But those hook-ups rarely led to re-kindling the actual romantic relationships; and even when they did, the relationship was usually in even worse shape than it had been the first time around. Most of these relationships had never been built around mutual respect — not because either of us were bad people, but just because that's not where any of us where at that moment in our lives. We had never known each other in the way that real friends do, so of course we struggled when we attempted to become real friends.

I wasn't conscious of any of this during my ex-friending days, of course. I would have told you that I was being an adult, that I respected my exes as people. I do respect most of my exes as people, and I do try to be an adult (rarely with much success, but that's an issue for another essay). But my desire to befriend them had nothing to do with either of these things; it was about my need not just for love, but for love and approval from people who had rejected me. No other approval mattered to me more than the approval of a man who had told me that I wasn't good enough; if I could get that approval back, maybe I would finally feel good about myself.

I was friendly with most of my exes for years, leaning on them a bit more heavily when I was single. But soon after I met my now-husband, in 2010, something funny happened: I realized that I wasn't actually friends with any of these guys. I liked them and thought well of them, but whatever we had didn't count as a friendship; it was just a game of sexual chicken. We couldn't call each other when we were hurting or send each other a link to a ridiculous GIF just because; if we did either of those things, there would always be an ulterior motive, some kind of power play.

Once it became clear to me that my husband was going to become, like, the guy I married, I noticed that I soon fell out of touch with almost all of my exes. They didn't seem to mind it, and neither did I. They were good men, worthy of respect, mature treatment, and all the happiness in the world. They just weren't my friends.

More like this
14 Underrated Date Ideas To Try With Your Partner
By Lexi Inks
Bumble's "Compliments" Feature Lets You Message Before You Match
By Lexi Inks
Here’s Your Daily Horoscope For December 9, 2022
By Mecca Woods
Why Portia From 'White Lotus' Is Absolutely An Aquarius
By Nina Kahn
Get Even More From Bustle — Sign Up For The Newsletter