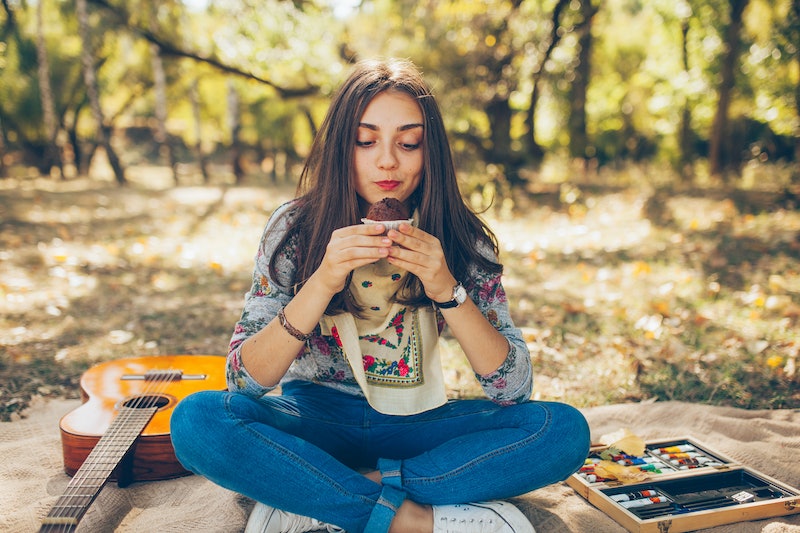 I grew up an only child, so I was a pro at doing things by myself by the time I reached adulthood. But I know not everyone has had the same upbringing, and I get why it can feel daunting to even think about going to the movie theaters all alone if it's not something you're used to. It might comfort you to know, though, that there are a lot of us currently enjoying a solo act. More than 25 percent of American homes today only have on person in it, a number that has tripled since 1970.

And we're having fun. The Journal of Consumer Research released a study surveying 86 people going to an art gallery. There were two groups, one going alone and the other going with a group of friends, and they were both asked to predict how much they were going to enjoy themselves. Researchers found that those flying solo expected they would have a lot less fun, yet they ended up enjoying the whole thing just as much as those who had buddies by their side. Funnily enough, the ones who went with friends overshot how much fun they would have, and had less fun than expected. The study also found that the main reason people didn't want to go anywhere alone was because they were afraid others would think they were total losers who had no friends.

Well, you are not a loser and you do have friends. Glad we settled that, because there's a lot to be gained from doing things by yourself sometimes. You may not realize it, but when you constantly do stuff with other people, you end up adjusting your preferences to those around you, rather than learning to listen to what you want. That becomes stressful after a while. Imagine how much more relaxing it would be to simply answer your own interests, in your own free time.

Here are eight surprisingly calming things to do alone.

1. Spend An Afternoon At Your Public Library

Without anyone whispering in your ear about their favorite book of short stories that was just released, you can ask yourself what it is you really feel like reading, and you can do it without worrying about anyone passing judgment on you for it. Go ahead, reach for that tween fantasy series or pick up the unabridged version of your favorite classic novel. Curl up in the corner on a comfy chair and read your selection, free of interruption. You'll probably leave feeling recharged and inspired.

If you're lucky, you might even run into a special event happening at your local library, like a poetry reading or spoken word. These small happenings are amazing ways to learn more about your community and support the local arts.

As a yoga teacher, I see most people come into the studio with a friend. While having a yoga buddy is great for so many reasons — it motivates you to come and it makes the experience more lively — there's a lot to be said for rolling out your mat solo every now and again. You soak up way more of the practice when you're on your own than when your chatty friend is beside you shooting you goofy facial expressions.

To reach the ultimate level of relaxation, go to a Yin yoga class by yourself. Grab all the props — bolster, blocks, blanket, strap — and go through the whole thing with your eyes closed.

3. Take Yourself Out For Dinner

A frightening thought, I know. But people eat alone more often than you might think. A 2015 survey by OpenTable showed that table reservations for one had gone up 62 percent in the last two years. If you shudder just considering it, even more reason to give it a shot. Bring a book or magazine if you need something to fall back on.

Eating alone gives you the chance to truly unwind. The multi-tasking game can be put to rest, as there is no small talk required as you're enjoying the cheesy garlic bread. Your brain will receive a much needed break. Plus, you'll be able to really concentrate on the menu and choose exactly what you want — without having to worry at all about sharing.

4. Cook A New Dish For The First Time

The buildup of stress in life can dull your senses, but cooking revives taste, touch, and smell. It's a sensory experience that will reduce anxiety and leave you super chill. Whip out a recipe you've never tried before and give it a try when you're at home alone. So what if it takes a few hours? Turn on some happy music, make the kitchen your throne, and see if you don't feel more relaxed.

Go ahead, pick the most embarrassing matinee at the theater. Nobody will be next to you to criticize the bits that you find wildly entertaining or heartwarming. There's something soothing about curling up to watch a movie by yourself as it is, and that feeling is amplified when you're snuggled in a huge plush chair in front of the big screen. Bonus: every last bit of popcorn is yours and yours alone.

In case you didn't know, science has proven that furry animals literally make your life better. Studies show that pet owners are less stressed than people who don't have a little companion. If you're not at the point in your life when you can bring home a puppy, no need to worry. There are plenty of shelters out there that need animal lovers like you to come give the dogs and cats a whole lot of affection.

Just paying a short visit to the animals who need homes can calm you down for the rest of the day. Research suggests that cuddling with animals releases hormones into our bloodstream that regulate blood pressure and help us unwind. Try to go back as often as you can — if not for you then for the puppies!

Thankfully, we're gradually moving away from the time when people used to cringe at the mere thought of a woman traveling alone and ask questions like "Aren't you afraid about safety?" A recent survey by Booking.com actually showed that American women are the ones traveling solo the most, and 63 percent of them report feeling more refreshed after the trip was over.

A road trip is a good place to start. It's relatively cheap, and you have a lot of different choices at your fingertips. Go to the beach, the mountains, or drive out to a landmark you've never had the chance to see. Even a short day trip will loosen up the stress knots and allow you to experience some new things.

8. Get Out Of Bed Early Enough To See The Sun Come Up

You might think you'll be miserable if you set an alarm clock for that early in the a.m., but you'll probably find the opposite to be true. Watching the sun come up can reduce your anxiety, stimulate your metabolism, and encourage more production of happy hormones. You'll forget about sleep altogether as you go through the rest of your day calm and cool as a solo traveler.