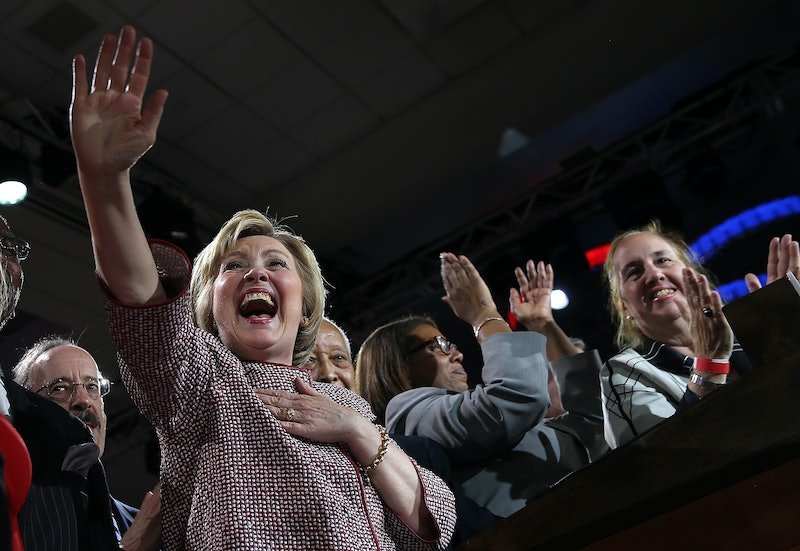 Well, what a wild New York primary that was, huh? On Tuesday night, the Empire State handed a pair of big wins to each party's frontrunner, with billionaire businessman Donald Trump cruising to a 35-point victory, and former Secretary of State Hillary Clinton notching a nearly 16-point win. It was a decisive evening, one that went a long way toward puncturing the perceived momentum of the Democratic and Republican challengers. And based on the polls, the states coming up on April 26 could follow suit ― here are some predictions for the Pennsylvania primaries, which will boast the most delegates that day, on either side.

The importance of the the Keystone State was made pretty obvious in the immediate aftermath of New York, tipped off by the fact that Vermont senator and Democratic candidate Bernie Sanders was already at an event there on Tuesday night before the news broke that he'd lost. And the polling on both sides paints a pretty clear picture of what you should probably expect ― in short, more of the same from what happened in the Empire State. Here are some predictions of what will probably happen in Pennsylvania next week, and what it'll mean for the broader race.

1. Trump Will Win, And It Won't Be Close

So, just how big is the bombastic GOP frontrunner's lead in the polls in Pennsylvania? According to Real Clear Politics, his average advantage over the last couple weeks has worked out to about a 20-point lead, about as comfortable and stable a number as you could see just days from a primary.

And it's not clear whether Texas senator and anti-Trump candidate Ted Cruz will even manage a second-place finish. He and Ohio governor John Kasich are virtually tied there, separated by less than one point ― meaning Cruz could again be shoved to third like he was in New York.

2. Clinton Will Win, And It Won't Be Close

While Clinton's delegate lead has been stable and secure for months, and her opponent Bernie Sanders' struggles in larger states with more diverse electorates has made it clear for a while exactly how things were going to end, there's no denying that double-digit wins lend her an air of legitimacy and credibility. The concept of momentum may not hold much water in reality, sure, but public perception does matter.

But it's certainly going to give that appearance of finality if Sanders actually loses Pennsylvania like the polls say he will. Clinton leads him there by an average of 13 points, and adding Pennsylvania to her list of wins on Tuesday would let her up the pressure for Sanders to pump the brakes and start trying to unify the party.

If you're looking for an indication of a truly great night for Trump in Pennsylvania, it's the unpledged delegates you'll really want to keep an eye on. The statewide vote seems more or less assured at this point, what with Trump's big lead in the polls, but there's some quirkiness to how Pennsylvania awards Republican delegates. Basically, out of the state's 71 total GOP delegates, a mere 17 will actually be bound to support the winner ― the other 54 are elected by the voters, but are ultimately free to support whomever they choose.

Could be good news for the anti-Trump movement, right? Well, here's the catch: 67 of the prospective delegates (there are 162 running to be sent to the Republican convention in July) have previously said they'll support whoever the Republican voters in their district favor. In other words, if any of those delegates end up in Cleveland, Trump cleans up on a district-by-district basis, and they stick to their principles, the path to 1,237 could get much easier.

4. People Will Ask If The Loss Sinks Sanders

For the record, Sanders could win Pennsylvania. He's pulled off an upset far greater already, albeit one he hasn't been able to duplicate yet. But the safe prediction is that he'll lose by double-digits, just like he did in New York when the polls said he would. And if he does, there's one more virtually inevitable headline that'll be circulating around on Tuesday night: "Is this the end of the Bernie Sanders campaign?"

The answer, in all likelihood, will be "no" in practice but "yes" in spirit. Sanders already faces some massively unfavorable delegate math as far as pulling into the lead in pledged delegates is concerned, and that's the only way he'd have the legitimacy to try to sway the Democratic superdelegates.

In other words, if we're being real here, he's basically toast, and has been for weeks, perception of momentum be damned. But there's no reason to assume that the Sanders campaign will actually shut down officially. Campaign manager Jeff Weaver sure didn't give any indication of that after the New York loss, telling MSNBC's Steve Kornacki that the campaign might pursue a pure superdelegate strategy all the way to the convention.