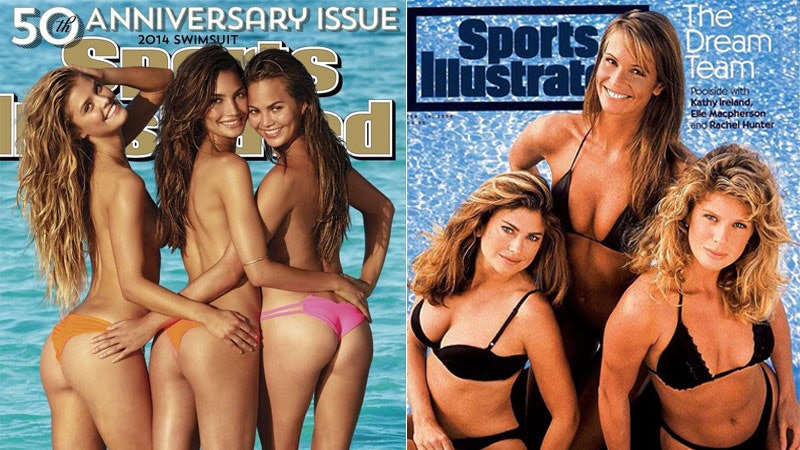 The 2014 Sports Illustrated’s swimsuit issue hits newsstands today — but it’s not just any old swimsuit issue. No, this one is the 50th anniversary of the swimsuit issue, so they went for the gold by featuring not one, not two, but three supermodels on the cover. Those models happen to be Nina Agdal, Lily Aldridge, and Chrissy Teigen, and they all look…well, kind of like stick-thin, bronzed clones of each other.

Um… was anyone hoping for something a little less… typical?

For the previous two years, Kate Upton has graced the cover of the magazine’s swimsuit issue, and it's been a breath of fresh air. Yes, Upton is tall and blonde and beautiful, but she's also supremely curvy, deriving her sex appeal from appearing soft and womanly rather than pre-pubescent and painfully thin. So why the sudden shift back over to the unattainable waifish thing, Sports Illustrated?

Take a look back to the 1994 cover and the differences are even more striking. Featuring Kathy Ireland, Elle Macpherson, and Rachel Hunter, the cover from 20 years ago depicts the women in coordinating black bikinis with their curves intact. Their bodies are comparatively fuller, reflecting a time when waif-thin wasn't considered the height of beauty; their bodies have the creases and variations in skin tone that actual, non-plasticine human bodies do, reflecting a time when Photoshop didn't run rampant. They look like distinct human beings rather than doppelgangers of each other, and they are facing the camera in a poised manner rather than pornily draped across each other. I write about how advertising affects body image a lot, but I hadn’t really realized exactly how wacky things have gotten recently — not really — until I saw the 1994 cover and thought, “Wow, how refreshing!”

I don’t want to go all “real women have curves” on you; as far as I’m concerned, all women are real women. The fact of the matter is, though, that one of the major reasons our standards of beauty are so skewed these days (and our rates of eating disorders and body hate are so high) is because all we see on the covers of magazines and in advertisements and so on are women so thin and flawless that most of us have no hope in hell of resembling them. It gives both men and women unrealistic expectations for what a woman “should” look like, and it’s damaging no matter who you are.

The ubiquity of Photoshop is largely to blame for these unrealistic standards. The first edition of Adobe’s software was released in 1990, just four years before the cover featuring Kathy Ireland, Elle Macpherson, and Rachel Hunter hit the newsstands; granted, I’m not super up on my advertising history, but I’d be willing to bet good money that Photoshop wasn’t nearly as overused (and misused) as it is now. And being able to look at the 1994 cover and see that — gasp! — Rachel Hunter's thighs actually touch each other is enough to make you feel a little better about your own body.

In addition to the ultra-thin and likely-doctored figures of the 2014 cover girls, their body language is also problematic. The swimsuit issue has pretty much always been about male wish fulfillment, but even taking that into account, this one is pretty bad. It’s reminiscent of the beach version of that persistent male fantasy about what ladies get up to at slumber parties. Agdal, Aldridge, and Teigen might not be having a naked pillow fight here, but I don’t doubt that a naked volleyball game might be looming in their future.

I realize that the Sports Illustrated swimsuit issue has a lot of history behind it; in fact, it’s largely attributed to legitimizing the bikini as an article of clothing. But it can still uphold that history and mission while sending more positive messages. They’ve featured non-models and athletes, and the cover of the very first one released in 1964 shows model Babette March pretty much just having some fun in the sun.

I think you can do better than this, Sports Illustrated. Just sayin’. And no, featuring Barbie on your cover doesn't count.