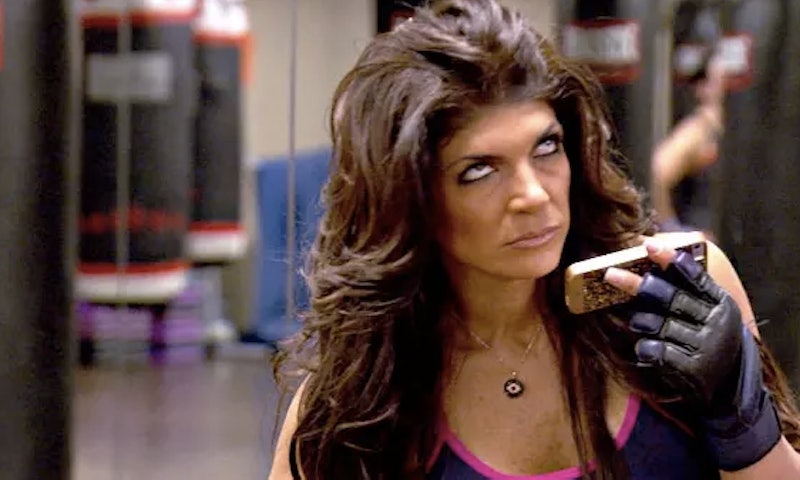 Even if you won't admit it, social media is probably a big part of your everyday routine. And I'm sure that there have been plenty of instances where you wanted to comment on someone's ridiculous Facebook status or tweet, but didn't because you didn't want to be rude or incite drama. In fact, there are a lot of times when it would be easier if the Real Housewives could speak for you on social media. These women are never afraid to say what is really on their minds.

The women from Real Housewives are not the kind of people who hold back their feelings. Most of them don't have a filter and just say whatever comes to mind as soon as they think of it. They are definitely the kind of people who would keep someone in check for writing a ridiculous tweet or for posting one too many inspirational quotes on Instagram. These ladies are never shy when it comes to sharing their opinions and they're even celebrated for igniting controversy. In contrast, if you told someone that she was annoying for posting selfies every single day, you would be seen as a jerk.

Real Housewives quotes can easily describe the annoying things that you are subjected to while scrolling though your feeds.

1. When A Friend Asks What You Think Of Her Ex's New Significant Other

No matter what you actually think about the new person who your friend's ex is dating, you have to act like they are awful. You just can't share this publicly, of course.

2. When Someone You Can't Stand Is Tagged In Drunk Photos

Even though you've done your fair share of untagging in the past, it's still pretty satisfying.

You can't help being annoyed by it — especially when it happens every single day.

4. When A Friend Unecessarily Uses Rap Lyrics For An Instagram Caption

I have no idea how Kendrick Lamar lyrics could ever describe a girls' spa day, but there are plenty of people who feel like this sort of thing is fitting.... when it never is.

Friends told you that people would be hitting you up on the latest dating app, but you haven't gotten one notification and you see no one who is worth your time. But asking where the hot guys are would be a little too aggressive for your bio.

6. When Someone Subtweets About You

Obviously, no one wants to be hated on, but I guess it is nice to feel important enough to be the topic of conversation.

7. When Someone Brags About Going To Brunch

Taking a photo of your scrambled eggs does not make you a lifestyle expert. Everyone brunches. Simmer down with the live brunch coverage.

8. When Someone Keeps Friend Requesting You

You've denied this friend request at least five times. Sometimes you even let it remain "pending" so they wouldn't send it again.

You are so open with your tweets that you forget your account is public and people actually read what you say. Oh well, they'll see what following you is like soon enough.

10. When A Friend Never Likes Your Posts, But You Always Like Hers

You are always there to support your friend. You favorite her attempts at humor on Twitter and you like pics of her new haircut, but you get nothing in return. She never ever likes your posts back. You don't need that kind of negativity in your life.

11. When Your Two Friends Will Not Stop Debating About Something Pointless

Even though you haven't been on Facebook since last night, this argument about the 1999 NBA finals is still at the top of your news feed. These people will not stop arguing and you are just so done with seeing their names pop up as this discussion continues.

12. When A Couple Posts A Picture Of Themselves Making Out

I get it: You're in a relationship. That still doesn't make it right for you to post pictures of you making out at some national landmark.

13. When Your Frienemy Is Tagged In A Pic Wearing An Outfit You Already Wore

How dare she wear an outfit that you were recently photographed in?

14. When You Are Tagged In An Unflattering Photo

You told your friend to delete the group pic last night after she showed you that you had one eye closed. Instead of doing so right away, she just puts up every photo from the night without paying attention. Come on!

15. When A Friend Posts About Working Out (Every Single Day)

Believe it or not, you can still work out even if you don't post about it on social media every single day.

16. When Someone Brags About Being Domestic

Making a smoothie and sticking a pretty straw in the cup doesn't make you the next Martha Stewart.

17. When Your Friend Tweets About Her "Crazy" Night

As entertaining as the tweets are, you never believe that any of these wild stories actually happened. Show me the evidence!

18. When Yet Another Person Announces Their Engagement

Nothing makes you feel more single than seeing another Facebook announcement about someone getting engaged. You're trying to be cool about it though, so you just hit them with that "like" and don't say anything in response. It's more fun being single anyway, right?

You were just trying to be nice by following back your neighbor on Twitter and then she started taking up your entire newsfeed talking about shows that you don't even watch. This is way too much, but don't want to be mean about it so you just put her on mute so you don't have to see that spam ever again.

OK, so using these quotes would be pretty rude, but at least now the thoughts going through your head can be said in Real Housewives lingo.