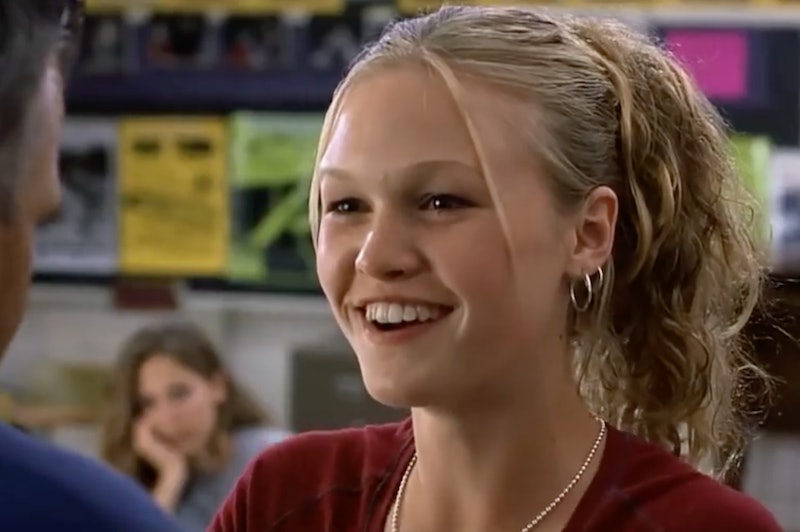 While 10 Things I Hate About You might be a high school movie about Cameron, a teen who pays a classmate to date the older sister of his crush so that he can date the girl of his dreams, the real protagonist is Kat, the edgy older sister. For anyone who grew up watching 10 Things I Hate About You, Kat is peak teen feminist. Her refusal to adhere to social norms, her dedication to her studies, and her rejection of materialism all worked to secure her a spot in the '90s movie hall of fame. (Not to mention the fact that she's also smart, determined and funny.) But, while Kat has many amazing qualities, she still makes some pretty terrible decisions. And those bad choices are why it's time to admit that Kat from 10 Things isn't as perfect as you remember.

Kat's sassy confidence and DGAF attitude are what a lot of people love about her, but they're also some of her biggest flaws. Revisiting 10 Things, it's clear that while Kat is, deservedly, a feminist icon, she's far from perfect. Here are seven reasons that prove just that:

Kat has plenty of reasons to be angry, but that doesn't give her an excuse to be actively mean to people. I get it, she doesn't like high school, but hey, she doesn't have to go around making it awful for everybody else.

2. She Runs Into Joey's Car On Purpose

Yeah, he blocked her in a spot, but she probably jacked up her dad's insurance rate just to make a dumb point. That's irresponsible and, frankly, more than a little scary.

3. She's Not A Great Friend

When Kat's BFF, Mandella, disagrees with her, like, say, on her desire to go to the prom, Kat's response is totally dismissive and pretty rude. And they're supposed to be friends?!

4. She's Not A Very Good Sister

As someone who used to fight with her sister (all. the. time.) I totally understand not being nice to your sibling. However, put into the context of the film, it's hard to watch Kat be so closed off from her little sister while letting her go off with Joey, a man she herself had a bad experience with.

By not being honest about Joey with her sister, Kat does her a huge disservice. It's not like Kat doesn't make her disapproval known before she comes clean. If she was so concerned that her sister was making these huge mistakes, why didn't she speak up sooner?

6. She Flashes A Teacher

Look, I'm all for sexual empowerment, but flashing a teacher/soccer coach just to sneak your boyfriend out of detention is really not OK. In fact, it's probably against about a billion school rules and regulations, not to mention really disrespectful and super icky.

Kat is constantly talking back and steadfast in her belief that she is right above everyone else. She also stands up to her teachers, her father, and anybody else who tries to tell her how a nice young lady should behave. Loudly.

OK, so maybe she's not the absolute worst. There are many things that I hate about Kat Stratford, but I also hate that I don't hate her. Not even a little bit. Not at all.