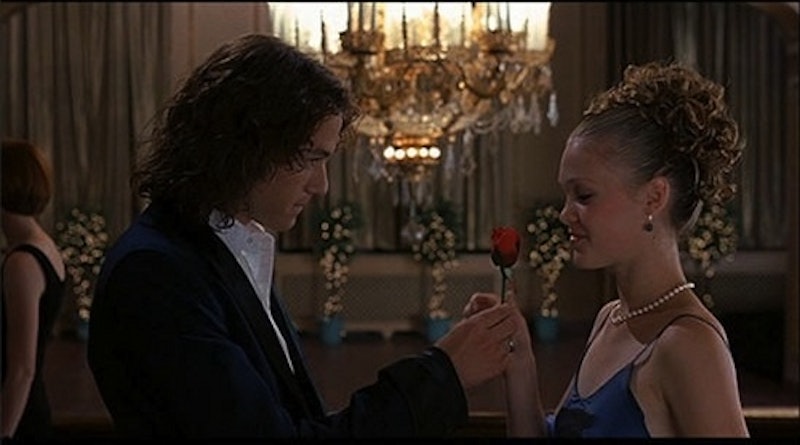 There isn’t much that I don’t know about 10 Things I Hate About You . I mean, you’re talking to the girl who has pretty much every single line of the movie memorized and has to spontaneously jump on a table and start dancing every time “Hypnotize” comes on at a party. But it turns out that there are a number of things I didn’t know about the film upon digging deeper into the film’s history and watching the cast commentary on the commemorative DVD. (It was very painful research, I can assure you.)

The movie, a loose adaptation of William Shakespeare’s The Taming of the Shrew starring Julia Stiles and Heath Ledger, quickly became every ‘90s child’s favorite movie. Adolescents across America watched in adoration as the stubborn, strong Kat Stratford refused to date anybody, even resident bad boy, Patrick, and his aggressive advances. But just because audiences everywhere were enraptured by Kat’s strength and independence, they weren’t made totally immune to Ledger’s charms. Because one thing is for sure: 10 Things I Hate About You was definitely the film that made Ledger a star, both on the big screen and in the hearts of broody teenagers everywhere.

But even though we might all know the obvious trivia about the movie (like any good fan, you probably already know which Shakespeare play the script was based on), I can promise you that there are still a few things about the movie that will come as a surprise.

1. Julia Stiles Only Took One Take To Read Her ’10 Things’ Poem

According to the DVD extras, Kat’s tears toward the end of the poem were totally spontaneous and unplanned. Talk about serious acting skills. She shot the scene in one take and did an incredible job of it.

2. The Movie Almost Got Punked

Heath Ledger beat out Josh Hartnett and Ashton Kutcher for the role of Patrick. And thank goodness for that. I can’t picture anyone but Ledger bullying his way into Kat’s heart.

The actor compares the experience of watching her younger self on screen to watching home movies of when you're a baby in an exclusive interview with Cosmopolitan.

4. Heath Ledger And Julia Stiles Began Dating During The Filming

According to the 10th Anniversary commentary by the cast, the two stars of the movie felt sparks on the set and fell in love while filming.

5. The Movie Predicted The Future

6. The Writers Went On To Do Awesome Stuff

The same writers who wrote 10 Things I Hate About You went on to write such awesome flicks as Legally Blonde and The House Bunny.

7. The Entire Thing Was Shot On Location

There were no sets used during the filming. The entire thing was shot at an actual high school, Stadium High School, in Tacoma, Washington. Even the scenes inside the school. The rest were shot in and around Seattle.

Chalk it up to one talented cast: speaking exclusively with Buzzfeed, Allison Janney says that the director let her "be silly" and appreciated her inputs.

9. Andrew Keegan Didn't Know How To Draw That Famous Cartoon He Drew

According the Krumholtz, he had to give Keegan a bit of a hand in the art department: “I remember distinctly that Andrew didn’t really draw a good penis and I kind of showed him how to draw a penis. I had to tell him, ’This is what it should look like and put the tip by my mouth.'”

10. Kat's Drunk Table Dance Helped Land Her The Part In 'Save The Last Dance'

See, ladies! Sometimes it does pay off to dance on tables.

True story. Up until this film, Ledger had only been in Australian flicks.

12. Those French Lessons Were Totally Legit

In real life, Joseph Gordon-Levitt speak French fluently, so there was no need for him to brush up in order to tutor Bianca.

But it just wouldn't have been the same. According to screenwriter Kirsten Smith, she really really wanted to play the other sister.

Now let’s all go make some popcorn, pop this movie in the VCR, and relive our youth something fierce.