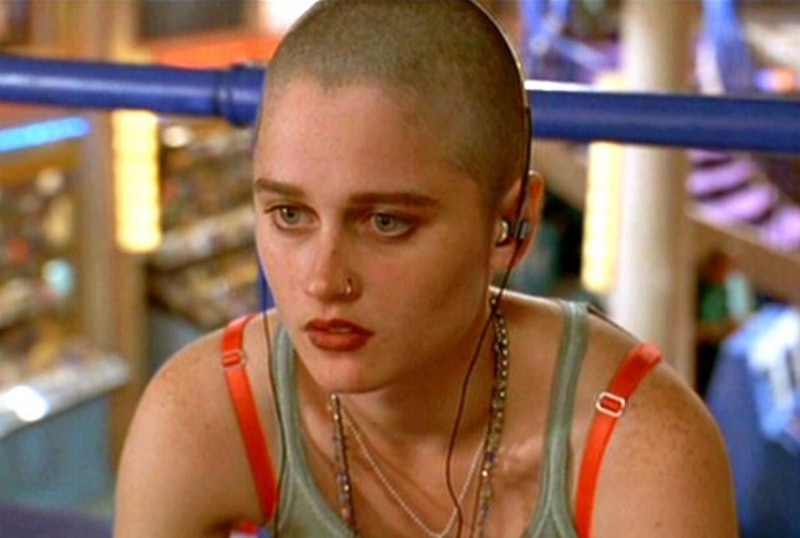 Empire Records, the 1995 dramedy about teens who worked in an indie record store, became a cult hit with people of my generation. We were slightly too young to be the intended audience of the film, but while those older teens that the movie portrayed rejected the film as nonsense, those a few years younger, like myself, ate it up. One of the reasons why I personally gravitated towards Empire Records was because for once, I saw a girl like me in a popular teen movie. I wasn't a straight-A getting, good girl like Liv Tyler's Corey, and I wasn't the popular, pretty one like Renee Zellweger's Gina, either. I was a little dark, a little moody, and a little bit different. Which is why I loved Debra, played by Robin Tunney.

Now, I didn't shave my head, wasn't suicidal, and didn't have crippling depression, but I identified with Debra because she wasn't what the mainstream audience, or even the kids at my high school, considered a cool girl, and neither was I. Even though Empire Records was about a band of misfits, Debra was most definitely an outsider, which is why I gravitated toward her so much. She was the cool girl, at least in my book. And she deserved to be the star of Empire Records, because there's proof the movie would be so great with her in the lead. Here's how:

1. Everyone Would Care About The Environment

And use only eco-friendly modes of transportation. Who doesn't want a cute little vintage Vespa? The might not be the best for highways, but for getting around small towns? They're the coolest.

2. The Movie Would Be Moodier

Let's face it, Debra's not the happiest person. She goes through some rough times, just like any teenager, and the movie might be a little darker if it was focused on Deb's attitude.

3. The Hairstyles Would Be Edgier

How awesome is Robin Tunney? According to a Buzzfeed retrospective on the film, Tunney made the argument that her character's head should be shaved, for real, on camera. Recalled Buzzfeed, "The scene, which was filmed with three cameras, is a pivotal, beautiful moment…and hundreds of thousands of girls, this one included, wondered what they might look like with an exquisitely shaved head."

Debra's a grand supporter of the arts, so much so that she leaves her hair in the bathroom but tells AJ, "It's still in the sink if you want to glue it." The supportive Debra knows AJ's art is weird, and wants to do everything she can to help.

5. Comfy Hoodies Would Be All The Rage

6. We'd Get A Berko Backstory

One thing the movie never makes clear is who exactly Coyote Shivers' character Berko is supposed to be. Is he Deb's boyfriend? Are they dating? According to that same Buzzfeed article, some character details about him were cut out by the studio. If Empire Records focused on Deb, though, fans would probably know more.

7. Or, Possibly, An LGBT Heroine

One huge Empire Records fan and After Ellen writer theorized that Debra is actually gay. In a piece called, "Debra, the lesbian who wasn’t there in Empire Records," Trish Bendix wrote, "Deb is not looking for a boyfriend: She’s looking for herself."

8. Everyone Would Be Braver

Debra's brush with death (she tried to slit her wrists with a plastic razor) made her a little impervious to fear. When Warren seems prepared to shoot up the Empire just to get a job, Deb approaches him with the calmness of a trained soldier. If only the other characters like AJ or Corey could face their fears so head on.

9. And The Movie Would Be A Little More Feminist

During that encounter with Warren, Deb calls God a she: "Well you can't kill me 'cause I'm already dead. And I talked to God, and she says, "Yo, wassup?" and she wants you to lose the gun." Clearly, Debra is bound for a liberal women's college where she'll learn the history of feminism, goddess mythology, and gender studies.

10. Everyone Would Be Way More Sarcastic

Everyone in Empire Records is already super sarcastic, but Deb in the lead would just make that humor even stronger.

11. But They'd All Be More Accepting, Too

Near the end of Empire Records, when Corey has her giant meltdown, it's Deb who comes to her rescue, and understands that even prissy, Harvard-bound popular girls can go through some rough patches, too. With Deb front-and-center, understanding one another would be the main message the movie provides.

How great was Deb? Empire Records is a better film with her in it.