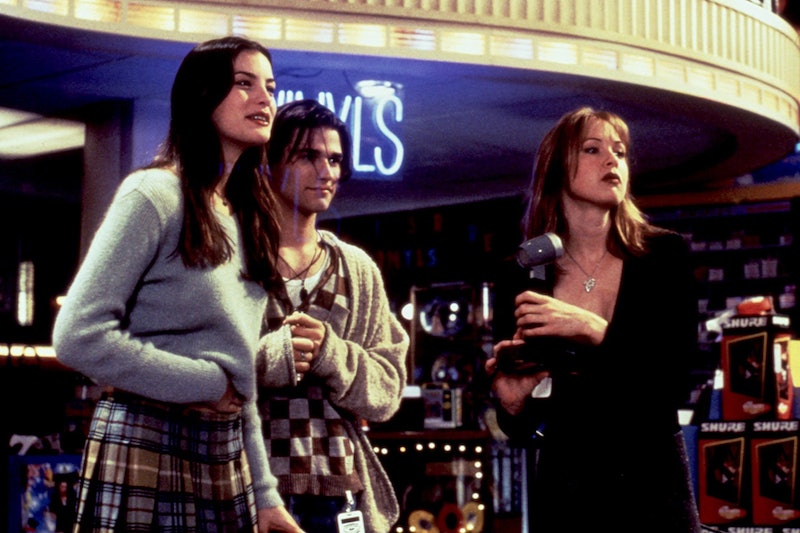 The script of Empire Records is a shared language for ‘90s kids who dreamed of growing up to work in a store as anarchist and exciting as the small-town music mecca in the film. The 1995 comedy didn’t make many waves as the box office, but Empire Records became a cult hit on video and later, on DVD. Little did the movie’s first audience know that the big-box record stores represented by Music Town on screen would eventually be made obsolete by streaming services and Amazon. Empire Records is delightfully dated in so many ways (missing your collection of pleated plaid yet?), but that’s to be expected of a film that’s over two decades old. It’s also a total hipster fantasy, in the best way. Empire Records is riddled with plot holes, some of which can’t be filled, lest the movie lose its happy, idealistic ending.

And frankly, I don’t need Empire Records to be grounded in any kind of reality. Joe, Lucas, AJ, Corey, and the rest of the gang at Empire Records (open till midnight!) are broad archetypes that beg to be identified with. Are you a frazzled over-achiever, a happy-go-lucky stoner, or a cynical loner? Someone at the Empire is your ‘90s avatar. And I’m always a sucker for a-day-in-the-life movies, wherein one 24 hour period magically changes the lives of all its characters forever. But still, your suspension of disbelief has to be in good working order to enjoy this movie. Because it doesn’t actually make much sense. Read on to see if you remember these eight gaping plot holes in Empire Records .

1. Why Would Joe Leave The Music Town Documents In His Desk?

It's pretty clear that Joe's young employees respect no boundaries, so why would he put the franchise agreement in his desk for any one of them to easily find? Maybe he subconsciously wanted Lucas or one of his colleagues to find it so they could talk him out of selling out.

2. There's No Stock In The Stock Room

First of all, the back room of Empire Records is larger than my apartment and the same size as the front of the store. There's a drum set, a comfy couch, and a break room, but one thing is suspiciously missing: where's all the music?

3. Joe Is A Cool Manager, But Cool Enough To Let His Employees Get High?

I guarantee this is not the first time Eddie's brought his magic brownies into the store. Is Joe completely clueless (doubtful), the boss of the year (maybe), or partaking himself on the DL? (That last one.)

4. Rex Manning Has No Entourage

OK, considering that Rex Manning is still putting out albums, he does have record company backing and A&R support. Even a washed up '80s star with an aging fanbase would attend a signing with more than one distracted assistant.

5. Does Gina Have ESP Or What?

Gina shows off her talent for guessing the cut and color of a man's undergarments as a way to seduce Rex Manning. But she never explains how she does it, which begs the question: if Gina is a psychic, why didn't she see the Music Town sale, Deb's suicide attempt, or Corey's breakdown coming?

The gang seems to agree that Warren is harmless and that everyone deserves a chance. But even a fake gun is a pretty serious threat; far more dangerous than baby Lucas's bedwetting. Also, if Empire Records is closing anyway, where is Warren going to work?

During Deb's "funeral," Lucas recounts the story of being taken out of foster care by Joe when he was 13 and the movie keeps going as if that's not a significant detail. So...did Joe have custody of Lucas as a minor? Does he still live with him now? Did Lucas ever call him "dad"? If not, why? Also, I have no concept of how old most of these people are supposed to be.

Empire Records is supposed to take place in a sleepy, Delaware town — the sort that wouldn't take kindly to a late-night outdoor kegger with a rooftop concert for added noise pollution. Why didn't the cops immediately shut the party down?