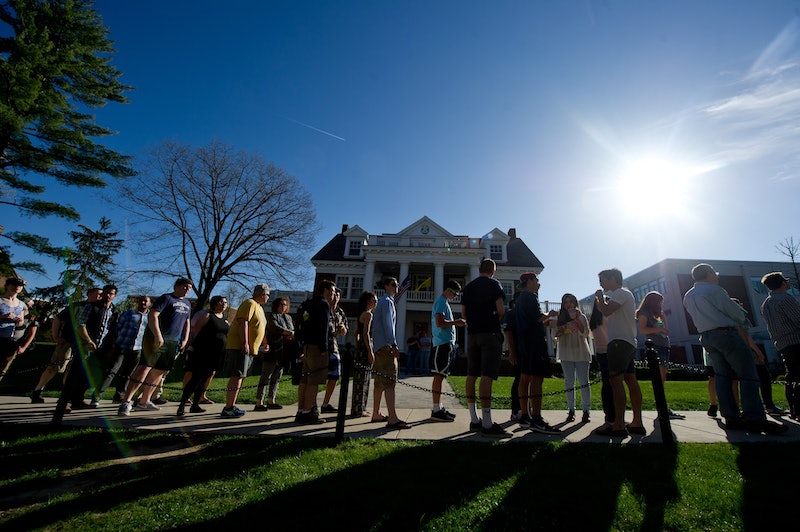 New York's primaries have come and gone, just like the many primary elections before them. This week's presidential primaries are in Maryland, Rhode Island, Connecticut, Delaware, and Pennsylvania — all of which will occur on Tuesday. Pennsylvania is the largest state in terms of territory and the most crucial state on the Democratic side, but it doesn't carry as many delegates for Republicans. Nevertheless, both parties will vote in the Keystone State on April 26, so there is a lot of important information that voters should know, like for one, what time Pennsylvania's primaries actually start.

Like many states before, Pennsylvania's polls open early in the morning — 7 a.m. early — which means some people will have the opportunity to vote before work. Polls close at 8 p.m., ultimately allotting voters 13 solid voting hours. This is a closed primary, so Democrats can only vote for Democrats, Republicans can only vote for Republicans, and so on. Likewise, a form of photo identification is required for first-time voters, but not for those who have hit the polls in years past. Each state has unique rules, so check with the Pennsylvania Department of State for the state's voting information.

One important piece of knowledge for Pennsylvanians, living in a state with, based on my own memory from canvassing there some years ago, a vast retirement-aged and elderly population, is the absentee return dates. Voters could only request absentee ballots up until April 19, and these ballots were due by April 22. Also, bear in mind, many campaign volunteers are willing to drive or transport voters to their local precincts to place votes — especially if it means a campaign will get even one additional voters. For those without licenses or who are unable to travel on their own, this is an option to consider.

Alternative ballot forms, for those who are disabled or handicapped, are also available via the VotesPA.com resource page, as are voter registration forms, since there is another major election later this year. The alternative forms are due no later than 5 p.m. on the Tuesday before election day.

This is an important race: there are 189 delegates at stake for Democrats, and 71 for Republicans (and votes on that side may sway delegates come the Republican National Convention). So don't let anyone call Pennsylvania names next week — get out there and make America proud, Pennsylvanians.