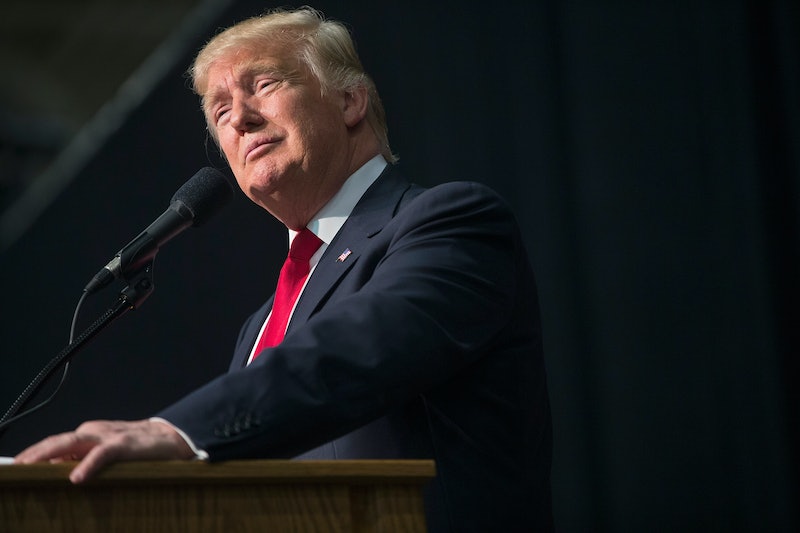 It's challenging to describe the moment you realize Donald Trump earned a spot in TIME 's Top 100 list of the world's most influential people. In simple terms, he's kind of like what Kanye West was to the 2015 list, except way worse. No one can deny that the man has major influence over American politics, but that doesn't mean we're happy about it.

The publication's editors went on a quest to find people who deconstructed walls and plowed through boundaries on an international level. In a perverted way, Trump gave them — and the sensation-driven world — at least one of those things. He trampled over society's relatively low standard of human decency by suggesting the nation build a "beautiful" wall to separate itself from Mexico, among other wildly un-American propositions. By perpetuating negative stereotypes, he channeled the nation's anger toward the status quo into a downward spiral of discrimination and ethnocentrism. So yes, he broke boundaries, but he hasn't gone about it in an admirable way.

Maybe that's why North Carolina Congresswoman Renee Ellmers (R) refers to Trump as a "the rule breaker" in an article written for TIME. In her opinion, though, he is the leader America needs right now. The billionaire candidly challenges norms, and has the potential to change a political system corrupted by congressional funding and special interests. Based on his most recent victory in the New York primary, where he won over 60 percent of the vote, she's not the only one who believes he can serve America well.

According to The Guardian's Thomas Frank, Trump's widespread support among voters is the greatest American mystery at this point in time. The nation continues to gasp over and over as Trump snags delegates. But like it or not, people support him for some legitimate reasons. For example, he advocates against trade agreements that would ship jobs overseas, and appeals to blue-collar workers who have suffered from industrial decline. In a field where facades and false promises have become commonplace, he speaks his mind in a forthcoming manner. That doesn't mean, however, that he goes about it in an acceptable way. Trump's upfront character is certainly refreshing, but what comes out of his mouth is repulsive. Unfortunately, influence isn't defined by progressiveness and positivity alone. It's also dictated by sensationalism, entertainment, and shock value.

In her article "How We Pick the TIME 100," TIME editor Nancy Gibbs explained that influence can be measured in a variety of ways. In particular, she mentioned Trump's 5.9 million Google News mentions in the past year. In our society, the loudest shouter gets the prize. When Kanye West goes on an insane Twitter rant, he gets insane attention. Controversial outbursts turn heads and create a public presence that cannot be denied. TIME isn't incorrect in acknowledging the immense influence Trump has had on this year's elections.

Trump is a leader, but he's not the type of leader we should be looking up to right now.

More like this
Why You're Seeing Green Bandanas At Abortion Rights Protests
By Lexi Inks
5 Ways To Stand In Solidarity With Women In America From The UK
By Sophie McEvoy
How To Fight For Reproductive Rights, Based On How Much Time You Have
By Courtney Young
Juneteenth Is Now A Federal Holiday — Here's What That Means
By Lani Seelinger and Syeda Khaula Saad
Get Even More From Bustle — Sign Up For The Newsletter